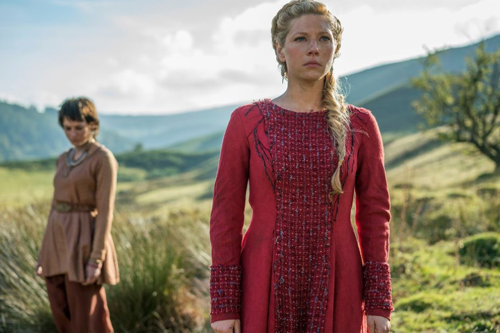 Tonight on the History Channel Vikings returns with an all new Wednesday, December 14 season 4 episode 13 called “Two Journeys” and we have your weekly Viking recap below. On tonight’s Viking season 4 episode 13 episode as per the History synopsis, “Ragnar [Travis Fimmel] and Ivar (Alex Høgh ) deal with an issue involving their crew; Bjorn (Alexander Ludwig) has a surprising reunion.”

Vikings begins tonight with the crew from Ragnar Lothbrok’s (Travis Fimmel) lying on a beach, after their ships were destroyed from a violent storm. Ivar (Alex Hogh Anderson) is among the men on the beach, he wakes up beside his father, Ragnar. Ivar asks Ragnar what he sees, he stands up and cannot see any of the boats. The survivors ask Ragnar what he is going to do, and he better figure it out soon because they are the only survivors. One is angry with him, telling him his revenge is at the bottom of the sea feeding the fish.

They begin to explore the land they are on, hiding as men ride by on horses. Ragnar tells Ivar to leave his leg braces behind and crawl. Ivar says the braces make him normal, Ragnar jumps on him and takes the braces off, telling him he is not normal and once he realizes that, that is when greatness will happen, and tells him to crawl. Meanwhile at the Normandy Coast, Bjorn Lothbrok (Alexander Ludwig) is questioned by Hvitserk (Marco Ilso) about contacting their Uncle Rollo (Clive Standen).

The crew is upset that they have to carry the cripple. Ivar says everyone will blame him for the disaster and he starts to laugh. Ragnar asks him what is so funny, he says its just the great Ragnar Lothbrok acting like a nurse to a cripple. Ragnar isn’t pleased by his comment. Prince Aethelwulf (Moe Dunford) and his men come across the wreckage from Ragnar’s ships, and orders them to find Ragnar.

Bjorn arrives to see his Uncle and after Floki (Gustaf Skarsgard) tells him he will learn how well treachery pays off; Bjorn orders Floki not to do anything stupid. Floki says he has never done anything stupid in his life, but he is contemplating it over dealing with this scum – referring to Rollo. Rollo introduces his nephews and former friends to his wife and children.

Rollo says he doesn’t want to apologize, and they are where they are. Rollo and his wife, Princess Gisla (Morgane Polanski) want to know why Bjorn is there. Bjorn shows Rollo the map. He tells him he wants to go there, to this sea, but he has to sail around his coastline to get there and is asking for safe passage for his fleet.

Rollo asks him what he gets in return. Floki says they will not attack his villages and towns like they should do. Rollo steals the map from Bjorn and captures, everyone. Floki tells him they can’t keep them prisoners for long, there are 60 ships outside full of Vikings.

Ragnar and his men are looking for a village, when a young girl comes singing down the path, they all hide. They stay hidden while she picks mushrooms. The Vikings now see what they can eat besides any of the wild animals they caught.

The next morning, Ragnar tells Ivar the soldiers who found the wreckage will be looking for them now, and they may be a threat, but only a small threat. Ragnar assures Ivar, he did not come this far only to go back. He informs Ivar that it will only be the two of them, the others are not to be included.

Back home in Kattegat, Lagertha (Katheryn Winnick) is watching the villagers train. Queen Aslaug (Alyssa Sutherland) continues to have visions, this time she sees children running, blood and the traditional ritual ships on fire with dead bodies on it.

Lagertha tells Astrid that she plans on taking Kattegat back, that Aslaug isn’t fit to be queen. Astrid asks her about Ragnar’s children; Lagertha says that they are grown and gone. Astrid reminds her that Ubbe (Jordan Patrick Smith) and Sigurd (David Lindstrom) stayed behind, what will she do about them? Lagertha turns and smiles.

As the survivors are sleeping, Ragnar sneaks upon them and slits their throats. Ivar crawls towards a few of them, one wakes but he kills him with an axe before he can continue. He then comes after the only woman who came with them, when she offers him her body, he stabs her.

Bjorn’s wife, Torvi (Georgia Hirst) brings the slave girl Margrethe (Ida Nielsen) to Lagertha and Astrid (Josefin Asplund), informing them that she was being used by the sons of Ragnar. Astrid asks her if she hates all of the sons, before she can answer Lagertha says she needs to talk to Torvi. Lagertha asks her how everything is, then tells her she needs her to return to Kattegat before her absence is noticed. She tells her that if she returns there is something else she needs done as well.

As Rollo holds Bjorn and his men prisoners, they begin to blame Bjorn for his bad judgment; and how they all believed in him and trusted the gods were behind him. They are yelling at him for wanting to trust Rollo, and had they fought Rollo like they wanted, they could have died like vikings instead of like sheep. Two of Rollo’s soldiers come to take Bjorn, “don’t disappoint us, Ironside!”

King Ecbert (Linus Roache) is informed by his son, Aethelwulf that Ragnar has returned. He learns they came with a fleet, but from the wreckage it looks like most didn’t survive. He goes on to tell him that some were killed outside a village. Ecbert wants to know who killed them, but no one knows.

Ecbert is concerned that there is no sign of Ragnar but says he will not stop doing his duties because of one man illegally entering his kingdom. Aethelwulf tells him that it isn’t just one man; he’s a history of his race. He is the face of an enemy they must fight and overcome. Judith (Jennie Jacques) interrupts them, and asks if they are in danger, King Ecbert says that as long as it is only him, they are fine because he is “just a man’.

Ragnar hides him and Ivar as soldiers ride by again. Ivar tells Ragnae he is probably upset that he brought him along and probably wishes he had killed him when he was born. Ragnar smiles at him and says, “only when you talk.”

Ragnar tells him that he thought his legs would be his weakness, but they are his strength, a strength none of his other brothers have. He tells him its like he is a deaf man, who has eyesight like nobody else, sharper than anyone’s. He says Ivar is special, not in spite of his legs but because of them. Ivar looks at his father and says it is the first time he is admitting he was wrong, Ragnar says to him it will never happen again.

Rollo brings Bjorn up to meet a scholar he had set for to explain the map to him. Rollo translates for him and informs Bjorn that his piece is only a fragment of the actual map. Bjorn asks if there is another route than going along France, there isn’t. Bjorn asks Rollo for safe passage, Rollo says no, but they can go, only if Rollo goes with them.

Ragnar is carrying Ivar on his back. Ivar asks him what if they are going in the wrong direction, Ragnar tells him to then walk the other way, making the sounds of a donkey. Ivar makes a point to his father about the gods still favoring him. He says if you want to know if the gods still favor you, look around, look at us. Ragnar says that he gives the gods too much credit. Ivar then says that I guess he is just his famous father. He thought his dad got lucky because the gods favored him, but maybe that isn’t true.

Princess Gisla is upset that Rollo is choosing to go. She says that he chose her world, that she had his children, that he renounced their gods and honored God. She goes too far when she tells him that if she thought their children were vikings, she would kill them before he killed herself. Rollo grabs her throat and tells her that everything she says is true.

He loves her and he loves his children, but he cannot deny that part of himself, no matter how hard he tries. She tells him perhaps he isn’t trying hard enough. He explains that when they hear thunder, she only hears thunder, but when he hears it, he still hears Thor’s heart beating. Gisla grabs a pot and smashes it. She tells him if he goes away, this is probably the end for them.

Astrid meets with the brothers who stayed behind, Sigurd and Ubbe. Astrid asks how many sons there are of Ragnar’s. Lagertha says she knows of one for sure. They all raise a drink to Bjorn and Hvitserk. Ubbe and Sigurd ask why they are there. Lagertha and Astrid tell them that it was actually Margrethe who invited them and that she loves both of them and they will have to decide amongst themselves. Of course Astrid interferes and says unless they decide they can share her. Lagertha smiles.
Ubbe is in the middle of having sex with her, when Astrid and several shield maidens take Ubbe and put him in a locked room with his brother Sigurd. Ubbe demands they let him out.

Back in France, Rollo leaves with Bjorn, leaving his wife and children behind. Rollo’s hands and feet are bound, and he is thrown off the boat. After a while, Bjorn orders them to pull him up. Rollo spits up water, Bjorn nods his head as Rollo laughs and spits up more water. Bjorn orders everyone to row.

Lagertha, Astrid and her army arrive in Kattegat. Lagertha plans on keeping her word and taking back what was hers. Lagertha watches as her army slowly takes over the village. Queen Aslaug unwraps her sword, as she prepares for war. Lagertha shouts enough and says, “these are my people!” Aslaug walks out of her house with the sword.

Ragnar is still walking with Ivar on his back. He is exhausted, but tells Ivar they made it. He puts Ivar down. Ivar reminds Ragnar that he brought him there for a reason. Ragnar says that no matter what they do to him, he must remain quiet, so they don’t feel threatened by him. Ivar asks what they are going to do to Ragnar, and if it involves him getting hurt, it doesn’t sound like a good plan. Ragnar leans in and kisses him on the forehead and walks towards the village, Ivar crawling in front of him.

As they approach the village, soldiers raise their arrows at him, some villagers scream, and Ragnar raises his hands.