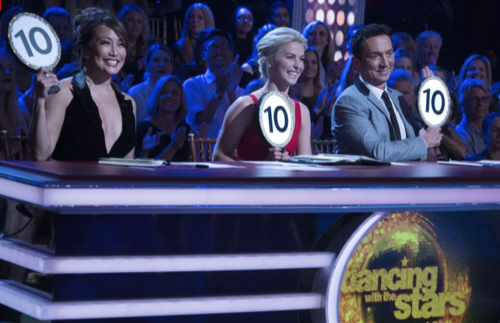 Len Goodman returns to the ballroom as head judge for the two-part season finale. It’s one of the closest races ever on the show, with some of the most skilled dancing celebrity contestants have ever pulled off. At the end of the night, one couple will be eliminated.

Tonight on DWTS the four finalists: Jana Kramer, James Hinchcliffe, Calvin Johnson Jr and Laurie Hernandez will each perform two dances – a Redemption Style dance (paso doblé, Viennese waltz, foxtrot or tango), and a freestyle dance – one of the biggest competitive dances of the season.

We can now reveal who will be dancing in the Dancing With The Stars finale for the mirror ball trophy.

The first couple going to the Finale and dancing for the Mirror Ball Trophy is Laurie & Val, the second couple dancing is Calvin & Lindsey, the last couple dancing tomorrow is James & Sharna.

The couple voted off and going home this week – NOT dancing in the finale is Jana Kramer and Gleb Savchenko!

Make sure to join us tomorrow to find out who will be willing the DWTS Mirror Ball Trophy!