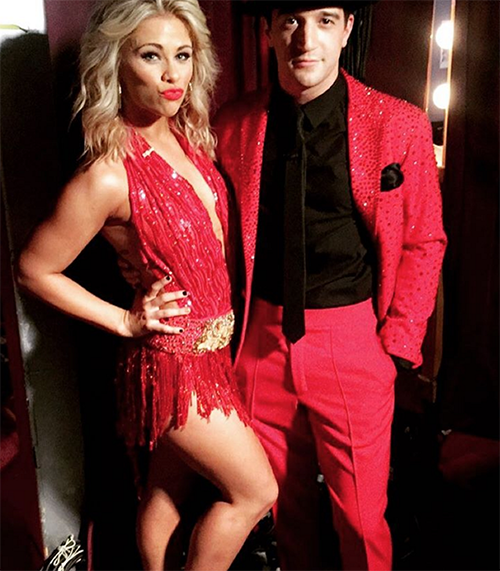 Who will be voted off DWTS Semi-Finals Week 9? Dancing With The Stars 2016 spoilers tease that on Monday May 16, the highly anticipated Semi-Finals will kick off on ABC. Going into Week 9 there are five remaining couples, and after Monday night’s double elimination, the final three will be revealed, and we will know who is moving on to the Season 22 finals.

DWTS 2016 spoilers tease that the dancers will take the stage twice for Week 9’s episode – they will perform once with their pro partner and then again in a trio dance. We combined last week’s scores and Dancing With The Stars spoilers to determine our Week 9 predictions.

Check them out, and don’t forget to vote in our Dancing With The Stars poll and let us know who you think will be voted off Week 9 Semi-Finals.

There have been some pretty shocking eliminations in Season 22, and it seems like every week one couple is in danger of being voted off that no one expected to see in the bottom three. But, Nyle DiMarco and Peta Murgatroyd seem to be the one exception, despite his cocky statements this month, DWTS fans keep voting for Nyle DiMarco.

The odds of Nyle and Peta not going to the finals are nil at this point. Dancing With The Stars spoilers tease that for Week 9 Nyle DiMarco and Peta Murgatroyd will be dancing the Argentine Tango to “Unsteady” by X Ambassadors. For their trio dance they will be partnering up with Jenna Johnson and dancing the Jive to “Hit the Road Jack.”

Last week Ginger Zee actually scored one point higher than Nyle DiMarco, and she also seems to evade being in danger of elimination week by week. We knew from the beginning of Season 22 of DWTS that Ginger would most likely make it to the finals, the fact that she has ABC and Good Morning America backing her is definitely a plus.

Dancing With The Stars 2016 spoilers tease that for the semi-finals Ginger Zee and Val Chmerkosvkiy will be dancing the Quickstep to “Fire Under My Feet” by Leona Lewis. For their trio dance they will be paired up with Artem Chigvintsev and dancing the Paso Doblé to “Shot Me Down” by David Guetta.

Paige VanZant is sort of a wild card on Dancing With The Stars. She’s solid dancer, but she doesn’t receive a whole lot of buzz and has been in danger a few times despite her high scores because America doesn’t seem to be voting for her as much as the other dancers. If the competition was based on scores alone – she would be giving Nyle DiMarco a run for his money, but that popularity factor makes her safety questionable.

According to Week 9 DWTS spoilers, Paige VanZant and Mark Ballas will be dancing the Argentine Tango to “One Time” by Marian Hill. For their trio dances, they will be paired up with Alan Bersten and dancing the Samba to “Hip Hip Chin Chin” by Club Des Belugas.

Let’s be honest – if it were not for the DWTS fans at home voting, Antonio Brown would have been eliminated a long time ago, his scores are mediocre in comparison to the competition. Will his charm be able to sway fans to vote him through to the finals? Unlikely…but hey anything is possible.

Dancing With The Stars spoilers tease that for Week 9 Antonio Brown and Sharna Burgess will be dancing the Contemporary to “Hall of Fame” by The Script. For the trio dance they will be paired up with Hayley Erbert and dancing the Argentine Tango to “Mi Confesion” by Gotan Project.

Oh, Wanya. In Wanya Morris’ defense, the Boyz II Men singer did better on Season 22 of Dancing With The Stars than any of us expected from him. But, he peaked early. The other dancers are still improving week by week, and he can’t seem to keep up now that the competition is getting stiffer. Last week he escaped elimination, this week he most likely won’t be so lucky.

According to DWTS spoilers Wanya Morris and Lindsay Arnold will be dancing the Charleston to “Shame on Me” by Avicii. For their trio dance they will be paired up with Witney Carson and dancing the Paso Doblé to “Explosive” by David Garrett and Franck Heijden and Royal Philharmonic Orchestra.

So DWTS fans, which three teams do you think will move on to the finals? Will Antonio Brown and Wanya Morris be eliminated? Or do you think someone else will be voted off in Week 9? Let us know what you think in the comments below and don’t forget to vote in our poll – pick 2 teams to be eliminated – check CDL for all of your Dancing With The Stars 2016 spoilers and news.