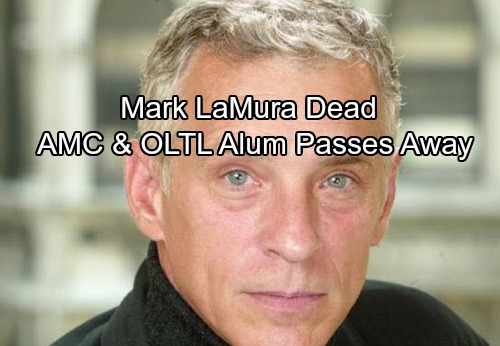 A great star of the classic soap operas All My Children and One Life to Live has died. New reports indicate that soap star Mark LaMura has passed away at the age of 66 after a long battle with lung cancer. Fans remember Mark as Susan Lucci’s on screen brother Mark Dalton on All My Children. He was also known for his roles as Vic Robinson on As the World Turns and Douglas Kline on One Life to Live.

Many of Mark’s former co-stars on AMC and OLTL were shocked by his death. Susan Lucci shared a throwback photo of the two on her Instagram account and captioned it with, “How can this be? I just received the shocking and deeply saddening news that wonderful Mark LaMura has passed away! He was such a talented and accomplished actor/ a bright and charming presence in all our AMC lives–and a really great guy. Mark was loved and he will be missed!

Many other soap stars such as Donnie Kehr and Steve Douglas Maihack also shared their thoughts and condolences on social media. Steve wrote on Facebook, “I’m SO deeply saddened to hear of Mark LaMura’s passing. Mark was a dear client of mine when I was an Agent. I just can’t believe it.”

In addition to his work on daytime television, Mark LaMura also appeared on many primetime shows such as The Sopranos and Law and Order: Special Victim’s Unit.  So far, Mark’s family and friends have made no comments about his funeral arrangements. CDL offers condolences to all of Mark LaMura’s family, friends and fans. In the meantime, don’t forget to check back with CDL for all the latest news, updates and spoilers on all of your favorite soaps right here.

How can this be? I just received the shocking and deeply saddening news that wonderful Mark LaMura has passed away! Mark played my brother Mark on All My Children–he was such a talented and accomplished actor/ a bright and charming presence in all our AMC lives–and a really great guy. Mark was loved and he will be missed! RIP, my friend.🙏❤️🙏