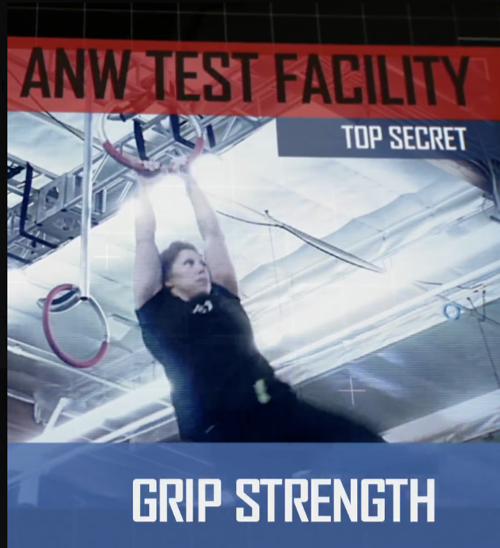 This week the show is in San Antonio, Texas. Matt and Akbar welcome a huge crowd and it is the first time the show has been filmed in San Antonio. Kristine introduces the course for tonight. It is made up of the floating steps, the tic toc, spinning bridge, sky hooks, pipefitter and finally the warped wall. The top finishers will move on to the finals. The first contestant is Rynel Gervacio and the crowd goes wild cheering him on. He easily makes it through the floating steps, the tic toc and the spinning bridges but misses the first ring on the sky hook and is out of the game.

Kaiti and Cara Hightower are twin sisters who will both compete tonight. Kaiti goes first and easily finishes the floating stairs but almost falls on the tic toc. Her foot just missed the water but she can’t make it through the spinning bridge and she is out of the race. Our next contestant is Conor Daly who is an Indy race car driver. Conor falls on the first obstacle after reporting he didn’t have much time to train.

Brandi Monteverde is a mom and a fitness instructor. Her mother died of cancer several years ago and her death pushed Brandi to be healthy and fit. She makes it through the first obstacle, the floating stairs easily but she can’t make it on the tic toc and is out of the race. Next up is Tremayne Dortch who is a 31 year old gym owner. He has been competing for years and had a horrible loss last year but is determined to make it to the finals this year. He makes it further than any other contestant but falls on the pipe fitter.

Nico Gentry is legally blind but hasn’t let that keep him down. He makes it through the first three obstacles but the sky hook takes him out. Jody Avila is 6’6” and his height can both help and hurt him. He is the first athlete of the night to successfully complete the course at 3:02.59. Charlotte Eccles is a 41 year old physical therapist and had to learn how to walk again after having a brain tumor. She falls on the second obstacle and is taken down by the tic toc. Brent Steffensen is making his eighth appearance on the show. He is thrilled to have the show in his home town of San Antonio. Brent makes it look easy and finishes the course in 3:20.38.

Barclay Stockett is only 5” but she packs a punch. She is 22 years old and is a gymnast coach. A female has not yet finished the course tonight. The first three obstacles are no problem for Barclay but she falls on the pipe fitter. 59 year old Michael Moore is the next contestant. He wants to be the oldest athlete on the show to complete the course. He did great on the first three obstacles but falls on the sky hooks. Josh Salinas is 26 years old and a Ninja coach at Iron Sports Gym. He kills it and finishes the course in the fastest time of the night at 2:10.29.

Daniel Gils is a well know Ninja competitor. He recently got married and his wife helps him train and eat right. He thinks he is at his prime and is the competitor to beat. He gets the best time of the night at 1:43.25 and the crowd goes wild. Kasy Catanzaro is a 27 year old gym owner from San Antonio. She has competed several times before and is a fan favorite. She makes it look easy until the sky hooks then she falls. The crowd is devastated. Olympic medalist Jonathon Horton is the last athlete to tackle the course. He was injured while training for the Rio Olympics and had to drop out. He does a great job and finishes at 4:27.28. Jonathon will move on to the finals.