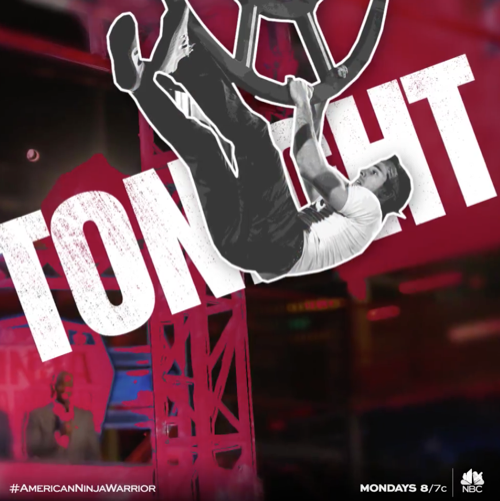 Tonight on NBC their obstacle course competition American Ninja Warrior returns with an all-new Monday, June 26, 2017, episode and we have your American Ninja Warrior recap below!  On tonight’s “San Antonio Qualifiers,” season 9 episode 3 as per the NBC synopsis, “A qualifying round in Daytona Beach features such obstacles as the Rolling Pin and Wingnuts.”

Tonight the show is in Daytona Beach, Florida. Matt and Akbar are excited to welcome racing fans to the show. Kristine introduces the obstacles for the night and they are the floating steps, the rolling pin, wingnuts, broken bridge, rolling thunder and finally the warped wall. Both the rolling pin and wingnut are new to the show tonight. The first contestant is Halei Jo Fuller who is a 21 year old student from Winter Park, Florida. Unfortunately, she falls on the second obstacle the rolling pin and is out for the night.

Casey Suchocki is a 25 year old student from Alabama. He tackles the first two obstacles easily but falls on the wingnuts. Once he gets out of the water he goes directly to his girlfriend and proposes. She accepts and the couple gets engaged on national television. The next contestant is 40 year old Otis Hooper who is a pilot with the National Guard and lives Maryland. He fails on the second obstacle of the race, the rolling pin. Bree Widener is a 23 year old makeup artist from Georgia and she thinks she has what it takes to finish the course easily. She makes it further than any other competitor of the night but fails on the rolling thunder.

Royall Eason is a 29 year old line cook from Florida and was so close to completing the course but just can’t make it to the podium on the rolling thunder and falls into the water ending his run. Jason Bergstrom is a 41 year old father of nine children. He is a handyman in Seminole Florida. He quickly makes it to the broken bridge but falls into the water and is out for the night. Ben Kennedy is a 25 year old race car driver from Daytona Beach, Florida. He falls on the second obstacle, the rolling pin and is done in the competition.

Tyler Gillett is a 21 year old Jimmy John delivery driver from Newnan, Georgia. He does an amazing job and completes the course in 2:17.23. He moves on to the finals and is the first athlete to successfully tackle the course of the night. Thirty-eight year old Chris Johnson, a banker from Jacksonville, Florida is up next. He falls into the water at the broken bridge. Eddy Stewart is a 34 year old firefighter from Hueytown, Alabama and made it into the finals last year. He finishes at 4:16.16 and for the third time in his career on American Ninja Warrior he moves onto the finals.

The oldest competitor of the night is 65 year old John Loobey, a window cleaner from Bristol, Tennessee. He made history last year by being the oldest competitor to complete an obstacle on the show. He finishes the floating steps and the rolling pin but falls on the wingnuts. He again breaks a record on the show. The crowd goes wild. Kevin Carbone, a 21 year old tennis instructor from Georgia is the next to compete. He finishes in 3:07.73 and moves on to the finals.

A baggage handler at the Orlando Airport, Tim Miller, 29, is the next athlete to attempt the course. He loses his balance on the broken bridge and falls into the water, ending his run for the night. Bootie Cothran, 48, from Possum Kingdom, South Carolina is the next athlete to compete. He fails on rolling thunder and is finished for the night. JJ Wood is a 30 year old stuntman from Miami, Florida. He has had success on previous seasons of the show and finishes with one of the best scores of the night at 2:35.07.

Jessie Graff is 33 years old and is also a stuntwoman and from Calabasas, California. She made history last year in Las Vegas and has become a role model for girls throughout the country. Although she falls on rolling thunder her time is fast enough to qualify her for the city finals. The last competitor of the night is 28 year old, Drew Drechsel. He is from Hamden, Connecticut and owns a Ninja gym where he coaches kids. He finishes in just 1:10.49 and sets the record of the night. He has the fastest time by almost 30 seconds.