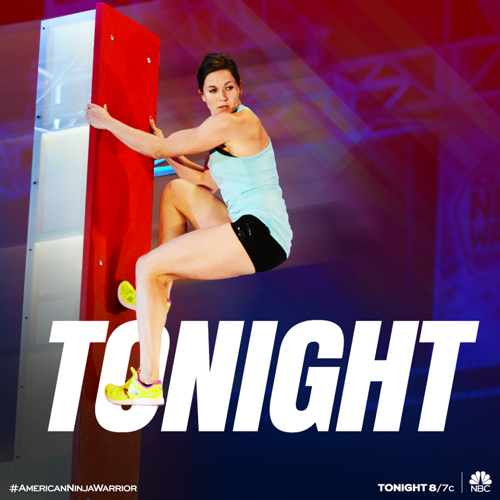 The fantastic four return to the show. They are strong women who are role models for girls and women who hope to compete on American Ninja Warriors. The show is in Cleveland, Ohio tonight and Matt and Akbar welcome a huge crowd. Kristine introduces the course for tonight. It is made up of the floating steps, the rolling log, the razor’s edge, ring jump, the I-Beam gap, and finally the warped wall. The top finishers will move on to the finals.

The first contestant of the night is Michael Nowoslawski, a 22-year-old marketing student. He does a great job on the first three obstacles but falls as he attempts to dismount on the ring jump. Next up is Shanon Paglieri who is a 47-year-old physical therapist.

She has a very hard time finishes the first obstacle, the floating steps but makes it to the next step. Shanon falls almost immediately on the rolling log and is out of the competition. Mark Ribeiro, 32-year-old fitness instructor is the next contestant to attempt the course. Mark easily finishes the first four obstacles but can’t get past the I-Beam.

Annika Nieshalla is a 22-year-old nursing student and was diagnosed with cancer when she was just 19 but has overcome her illness. She hopes to be an inspiration to other cancer survivors. She makes a strong showing but falls in the ring jump. Michelle Warnky is one of the fantastic four returning from last year.

Michelle is a 32-year-old gym owner from Ohio and has a large group of people cheering her on. She has made it to the finals three times when competing on American Ninja Warrior. She almost fell on the razor’s edge but saved it at the last second. Unfortunately, the ring jump is too much for her and she falls into the water.

Forty-five year old PJ Walsh is a comedian and is next up. This is his third time on the show and he has never been able to successfully complete the course. The razor’s edge proves to be too much for PJ and he is out of the game.

Katie Tennent is a 34 year old gym teacher but can’t even make it passed the floating steps. The second member of the fantastic four, Allyssa Beird (a fifth grade teacher from MA) is next up to the course. Allyssa makes it further than any other female of the night.

She takes on the I-Beam and completes it. She is the first male or female of the night to beat the I-Beam. She easily makes it up the warped wall and finishes in 6:20.32. Allyssa is the first contestant of the night to complete the course and the crowd goes wild. The Mustached Ninja returns to the show for the third time and is a fan favorite but just can’t make it passed the ring jump.

The Phoenix returns to the show for his second year and whips through the course in record time. He finishes in just 3:28.58. He is only the second finisher of the night. Sarah is the third of the fantastic four to return to American Ninja Warrior and is competing for her son Jacob. She makes a strong effort but falls into the water on the rolling log. Next up is 37-year-old Mike Bernardo. Mike is a firefighter from Washington, DC and his father is there to encourage him. He has competed six times before and has earned the nickname Machine Gun Mike. He easily tackles the course and finishes in 3:47.59. He moves on to the finals. Ricky Stenhouse Jr,

Ricky Stenhouse Jr, 29-year-old NASCAR driver returns to American Ninja Warrior for the second year in a row. The rolling log was his downfall last year but Ricky is determined to conquer it this time. He does it easily but this time the ring jump is too much for him and he falls into the water.

Matthew Guardo, a 54-year-old engineer from PA is the next contestant to attempt the course. He makes it through the first two obstacles with ease and takes his shoes off to get better traction on the razor’s edge. He finishes it but struggles on the ring jump and falls into the water. At 54 years old he has the best showing of the night in his age group. The Weatherman, Meteorologist Joe Moravshy, of CT returns to the show for the third time and is competing for his uncle Rob, who recently passed away. Rob came to every one of Joe’s competitions and was a huge supporter. Joe does a great job and works hard to beat McGrath’s time of 3:22.10. He does it with a time of 2:32.57.

The final competitor of the night is the fourth of the fantastic four women. Jesse Labreck is a 27-year-old caretaker from PA. She successfully completed the course last year and hopes to be the second woman of the night to complete the course. She makes it look easy but the I-Beam has been the end of many other competitors tonight. Jesse tackles the I-Beam and finishes the course in 4:22.06. She goes on to the finals.