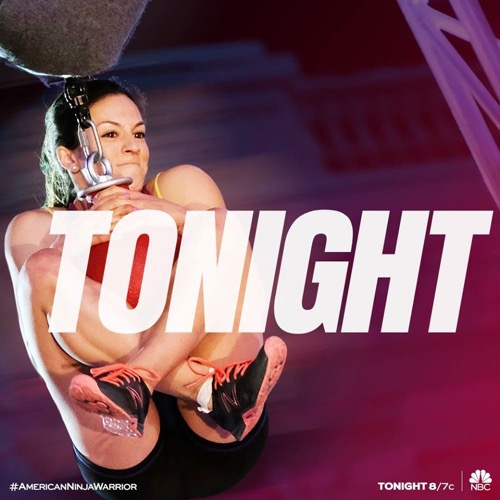 Tonight on NBC their obstacle course competition American Ninja Warrior returns with an all-new Monday, July 24, 2017, episode and we have your American Ninja Warrior recap below!  On tonight’s “Cleveland Qualifiers,” season 9 episode 7 as per the NBC synopsis, “The top 30 competitors from the Los Angeles Qualifier tackle the City Finals course, which features the Salmon Ladder, Stair Hopper, Swinging Peg Board and Elevator Climb.”

The city finals start tonight and two more obstacles have been added to the course. The show is back in Hollywood tonight and filming at Universal Studios. Matt and Akbar welcome an enthusiastic crowd. Twenty-two contestants will compete for a chance to move on to the finals in Las Vegas. Kristine introduces the course for tonight. It is made up of ten obstacles including the salmon ladder, the swinging peg board, stair hopper, elevator climb, floating steps, cannonball drop, fly wheels, block run, battering ram and the warped wall.

Nick Hanson is 29 years old, works as a coach and is from Alaska. His sister and mom are on hand to cheer Nick on. Nick finishes the first five obstacles in less than a minute than takes almost a full minute to complete the battering ram. Nick falls into the water on the eighth obstacle. The swinging peg board was just too much for him. Scott Wilson, Sander Odish and Ben Humphreys all attempt but fail the course. Up next is Natalie Duran. Natalie is a 25 year old Youtuber and failed on the battering ram in the qualifying event. Again the battering ram is too much for Natalie and she falls into the water.

Former NFL linebacker Anthony Trucks and High Wire Artist Ryan Robinson also try to beat the course but fail. Jackson Meyer is the next to tackle the course. He is a 24 year old entrepreneur from Oregon. Jackson is the first contestant of the night to successfully complete the swinging peg board and the crowd goes wild. But he then falls into the water on the stair hopper.

Kevin Bull is a 32 year old stock trader from Thousand Oaks, California. Kevin has alopecia and is a role model for many children who also suffer with the condition. Several children are at the competition tonight cheering Kevin on to victory they hope. Kevin is also defeated by the stair hopper. The next athlete up is Zhanique Lovett. She is a 30 year old personal trainer from Visalia, California. She is the mother of three and went further than any other woman in her qualifying event. Zhanique is defeated by the warped wall. It is the same obstacle that she could not overcome in the qualifying challenge.

Tiana Webberley, a waitress and Anton Reichel, a circus performer both are unable to complete the course. Up next is 32 year old, Fresno, California Shoe Salesman Gabe Hurtado. Gabe’s whole family is on site to cheer him on. Gabe is the first to complete the stair hopper and his family goes crazy. He has one more obstacle to tackle and he will be the first contestant of the night to finish the course and guarantee a spot in the finals in Las Vegas. Gabe is just five feet away from completing the elevator climb but falls before he hits the buzzer. He will most likely move on as he is gotten further than anyone else in the competition tonight.

Twenty-two year old MIT student, Charlie Andrews is the next contestant. Charlie has his mother and sister with him at the competition. Charlie flies through the course and finishes in just 6:02.21. He is the first of the night to successfully complete the course. His family and the crowd are thrilled with his victory. Rebekah Bonilla is known as the toughest real estate agent in the country. She is 30 years old and lives in Tucson, Arizona. She quickly works her way through the course but falls into the water at the swinging peg board. Her time is fast enough to qualify her for Las Vegas. She is just the 7th woman to ever complete the warped wall.

Gym owner Alan Conely, Engineer Brian Wilczewski and five time Ninja veteran Robin Pietschmann all showed great effort but failed to complete the course. Next up is 23 year old student Josh Levin. He is from Sunnyvale, California and a good friend of Charlie Andrews (the only athlete to finish the course so far tonight). Josh also finishes the course. His time is 6:27.98, just seconds longer than his good friend’s time.

Up next is 23 year old concrete worker, Adam Rayl. He is from Phoenix, Arizona and really surprised everyone with his amazing performance in the qualifying event. Adam whips through the course and finishes in just 5:07.92. The fastest time of the night belongs to Adam. Akbar leads a tour of Universal Studios and the King Kong exhibits highlighted. The next athlete is Sean Bryan. He is a 31 year old catholic worker from Berkeley, California.

He has brought along several priests as his cheering squad and is known as the papal ninja. With a lot of prayers from his supporters, Sean finishes the course in just 5:07.22, the fastest time of the night so far. The last competitor of the evening is Grant McCartney, a flight attendant from Honolulu, Hawaii. He did very well in his qualifying event in Los Angeles and has competed on the show three times previously.

Grant wants to beat the time of all the other athletes who have finished tonight. He is on track to make that a reality as he gets to the half way point of the course faster than any other competitor. Grant loses his grip and he falls into the water at the salmon ladder. He will not move on to Las Vegas.
THE END