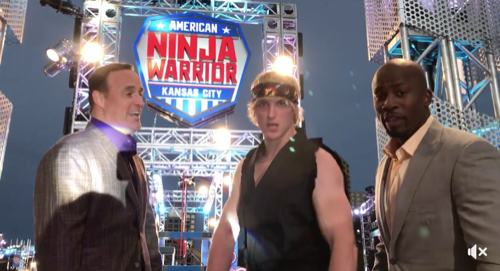 Tonight on NBC their obstacle course competition American Ninja Warrior returns with an all-new Monday, July 3, 2017, episode and we have your American Ninja Warrior recap below!  On tonight’s “San Antonio Qualifiers,” season 9 episode 4 as per the NBC synopsis, “A qualifying round in Kansas City, Mo., features six obstacles, including the Hang Glider, Broken Pipes and Crank It Up.”

The first competitor of the night was a familiar face because it was Chris Lange. He had tried out a couple seasons back and missed out on his chance to take on the Finales. But Chris was back this year to redeem himself and unfortunately, there were a few new obstacles. The course was separated into six obstacles with the familiar Floating Steps being the first however then moved on to the Hang Glider, the Broken Pipes, the Crank It Up, the Bar Hop, before it ends with the Warped Wall. So Chris had hoped he would make it through all six obstacles and the high school teacher ended up falling prey to the Broken Pipes.

The Broken Pipes was when the floor was shifting underneath the competitor and so it knocked down Chris before he knew it. However, the next competitor had an easier time on the same obstacle. Derrick Pavoni grew up making pizzas and would have normally been written off because of his small stature yet he used that same weight too quickly propel himself through the first three courses before he too was wiped out. Derrick sadly couldn’t keep the same stamina that had gotten him through the beginning on the Crank It Up. So that obstacle also claimed its first victim of the night.

Yet, with each competitor going just a little bit further than the last, there remained some semblance of hope. So the next potential warrior of the night had had a lot riding on them when he surprised everyone by crashing out on the second obstacle and he wasn’t the only one to disappoint. In quick succession, two others went on to crash out early as well and that spelled disaster for the rest of the evening. There were some favorites that were quickly picked out by the crowd as well as the commentators though the Broken Pipes kept taking down some of the very best and it soon looked like that was the obstacle to beat.

So admittedly there were a few that didn’t thin Sarah Schoback would make it very far. She was a mom that had opened up her very own Ninja Gym, but all the same, she had her detractors and those same people were surprised when Sarah went on to make it pace the Broken Pipes before she succumbed to the Crank It Up. The Crank It Up required a lot of upper body strength and she just didn’t have it in her to go much further after she had nearly slipped on the Broken Pipes and had used her upper body to hold on. Though Sarah shouldn’t be ashamed of how far she had gotten. She had surpassed most of the men.

Including Rich Talavera. Rich was 70 and was the oldest ninja that had ever been on the show however, while he became the oldest person to complete the Floating Steps, he did fall on the Hang Glider. But “the Lizard” had been different. He had gotten very far and had even survived the Crank It Up however he had made an unusual mistake that caused him to wipe out on the Bar Hop. He had tried to get to the next bar that was four feet away by jumping backward and that had cost him everything because it literally did not make sense. Why would you try jump backward when that limits what you could see? So everyone questioned that one!

The crowd was stunned and the hosts eventually came to the conclusion that the Lizard was just trying to show off when he fell. However, the Bar Hop had seemed like that would be the farthest any of them could get until an all-star showed them all up. Brandon Mears, who was known as one of the Towers of Powers, was also going to become a daddy. He and his were apparently expecting their first child that they found out was a boy and so Brandon had wanted something to show his son one day. And the footage of him basically being the first man to get through all six obstacles was going to be one of a hell of a gift.

Brandon was practically on fire during the course. He sailed through everything like it was child’s play and had gone on to be the first person of the night to complete the whole thing. So Brandon had set a very high bar and unfortunately not many could meet it. There were some contestants during the commercial break that had tried to emulate Brandon and they all failed. Yet, Dougie Fresh ended up surprising everyone. He had gotten passed most of the obstacles as if they hadn’t mattered and it had looked like he would be the second man to complete the course through the Warped Wall proved to be his undoing.

Dougie had tried to rush the wall and then he had tried to take his time. Though no matter what he did, he simply could not get climb the Warped Wall and eventually he ran out of time before he could make any more attempts. So it was a nice showing and timing turned out to have more important role than anyone thought because it was one thing to make it to the end and it was another to make it there with a reasonable enough time that would allow a competitor to move on. And so some tried to patiently make it across some of the harder obstacles, but while others had used their speed to propel them across.

Jimmy Choi however had needed to be one of the patient ones. He suffered from Parkinson’s Disease and that meant he often had tremors in his hands and feet. But Jimmy didn’t let his condition stop him from becoming a Ninja and his story was inspiring. With how he trains at home and with his kids. So the entire audience had been rooting for him and they had hoped he would make it to the end except the Broken Pipes had struck again. It had happened as Jimmy tried to take his time to cross some of the spinning pipes and had fallen on the second one before he could reach the wall.

However, the Broken Pipes were frankly dangerous. It was hard for anyone to make it across shaky ground and so some of the best decathlons had also been a victim to a grueling obstacle. So after Brittany Reid’s boyfriend had wiped out on that course, everyone had thought that maybe she too would could get stuck down yet she proved them all wrong by getting pass the Broken Pipes and instead wiping out on the Crank It Up. The Crank It Up had tired her out and you could see the strain on her face as she struggled to make it to the end only for her to fall on the last crank she had to go through.

So that was upsetting though Brittany said she was glad that she did because she had lots of fun. Yet, the next competitor had been Jelani Allen. Jelani was the youngest athlete this year and the 21-year-old had actually been a walk-on. He had apparently heard about the show on TV and had begged his grandfather to let him go. So Jelani had been a Wild Card and he had managed to complete the entire course by skin of his teeth because there had been several moments where it looked like he was going to fall in the water and the fact he held on despite everything had had the crowd on their feet chanting for him.

Then again the crowd had been filled of family and friends that had accompanied each competitor and so they were always on their feet, but some returning champs were still pretty much the favorites. Like Kyle Schulze for instance, had been a favorite. He had down some of the courses in the past and he was back this year to prove that he could still do it. So he made it through the first couple of courses and had even made it passed the Crank It Up when he suddenly hit a wall with the Bar Hop. By then he had been tired and the strain could once again be seen by everyone. Though the fact that Kyle had made it farther than a lot of them meant there was still a chance for him in the finals.

In the time between Brandon first won and Maggi Thorne, there had been only three people that had completed the entire course. So Maggi had hoped that she would be the fourth person to finish because she had trained all year just to get to that point however, Crank it Up had also taken her down with many others. But Maggie isn’t giving up and had more or less she would join the competition again at the first chance she could. And so Maggi was knocked out and later it was Dan of the Power Towers turn. Dan and Brandon were considered two of the greatest athletes there and this time around Dan had disappointed his partner.

He had fallen on the Bar Hop and hadn’t made it as far as some of the others with the others including Ethan Swanson. Now, Swanson had been different. He had trained on some of the most dangerous courses around the city and he had did that to make sure that he couldn’t fall because if he did on the training course then he could have easily been crippled or have died from it. So Swanson gave it his all and he would go on to become the fourth person to finish the course on tonight’s episode. And so his position was secured and it was eventually revealed that Maggi and Sarah Hessen were both going to the Qualifying Round for their timing.

And so the last person that ran the course turned out to be Lance Pekus. Lance was considered the Cowboy Ninja and he didn’t take off his cowboy hat even once. So Lance ran the course and won despite his hat obscuring his view because he wanted to win being himself and he did just that, but there was truly a handful of people that passed the entire course and that smelled of trouble for those that barely qualified for the next round.