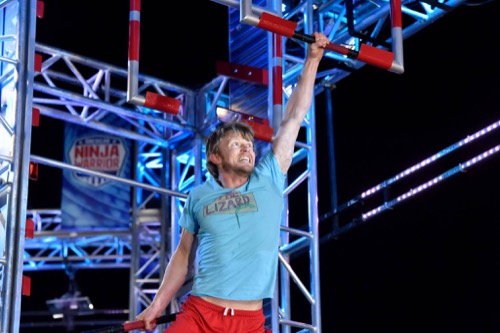 Tonight on NBC their obstacle course competition American Ninja Warrior returns with an all-new Monday, August 21, 2017, episode and we have your American Ninja Warrior recap below!  On tonight’s “Kansas City City Finals,” season 9 episode 11 as per the NBC synopsis, “The top 30 competitors from the Kansas City Qualifier compete for a chance to compete in the national finals.”

The show opens in Kansas City, MO and Matt and Akbar welcome the fans to the city finals. The contestants will be competing for a chance to move on to the finals in Las Vegas. Kristine introduces the ten obstacles tonight and they are: the Floating Steps, the Warped Wall, the Hang Glider, the Broken Pipes, Crank It Up, the Bar Hop, the Salmon Ladder, the Floating Monkey Bars, Iron Maiden and finally the Elevator Climb. If a contestant can finish all ten obstacles they will be guaranteed a spot in Las Vegas.
Morgan “Moose” Wright is the first athlete to take on the obstacle course. Morgan is a 42 year old P.E. teacher from North Ft. Myers, FL. His two daughters and wife are on the sidelines cheering “Moose” on. He makes it all the way to the Salmon Ladder but falls on the first rung. Time will tell if his time is good enough to move on to the finals in Las Vegas.

The first female to compete of the night is Sara Heesen. She is a 31 year old bartender from Plymouth, MN. Sara has had a lot of support from the customers in her bar. She almost beat Crank It Up but falls on the last bar. Time will tell if her time is good enough to move on to the finals.

The next contestant is Ethan Swanson. He is a 27 year old YouTube Stuntman from Chicago, IL. Unfortunately, Ethan is done in on the third obstacle and is out. Wes Whitlam is known for the kilt he wears during his competitions. Wes is a 36 year old Software Manager from Shelby Township, MI. Wes has a strong start but again the Floating Monkey Bars are too much for an athlete and he falls into the water.

While we were at commercial break Eric Middleton, Abby Paul and Broc Bebout all attempted the course but failed. Next up is 21 year old Michael Bougher. He is a National Guardsman from Ft. Wayne, IN. He always wanted to be a soldier growing up and is now living his dream by competing on America Ninja Warrior. His speed gets the best of him and he falls on the second obstacle.

Dan Polizzi is a 35 year old Firefighter from Oswego, IL who is determined to make it to the finals this year. He has been on the show for several years and thinks this is the year he and his good friend both make it. That is not the case as Dan is defeated by the second obstacle. Earlier tonight Devin Harrelson, Kyle Schulze and Tyler Smith all attempt to complete the 10 obstacle course but fail.

A 26 year old student from Mission, KS is up next. He is Mitch Vedepo. Both his mother and girlfriend are sure he can make it all the way. The Broken Pipes have been too much for several competitors but Mitch completes them easily. Mitch has the best run of the night and was within just inches of the buzzer but can’t hold on. Nonetheless he will be moving on to the live finals in Las Vegas.

Kyle Mendoza is a 27 year old FedEx Driver from St. Charles, MO. In less than one minute Kyle finishes the first four obstacles but the fifth is too difficult and Kyle fails. Maggie Thorne is a 35 year old Marketing Director from Lincoln, NE. She is a favorite on the show and recently divorced her husband. She is the first woman to complete Crank It Up and makes it further than any other female of the night but falls on the Floating Monkey Bars.

While we were away Spencer Johnson and Dave Cavanagn both tried their skills on the course but failed. Brad Spine is 31 year old Arm Wrestler from Floyds Knobs, IN. Brad is known for his huge biceps and if he can finish the Salmon Ladder he will be guaranteed a spot in the finals but he just can’t do it. His fate is now up to the time of the other competitors.

Tyler Yamauchi is a 31 year old stay at home dad from Hoffman Estates, IL. He is one of the smallest competitors of the night and also one of the best. Tyler takes on the Iron Maiden. Only one other competitor has made it this far to night. He falls as he attempts the dismount but his time is good enough to earn a spot in the finals.

While we were away two more athletes attempted the course but it was too much for Hunter Guerard and Annie Dudek. Sarah Schiback is a 32 year old mother of two who runs her own Ninja gym in Edina, MN. There is only on spot left for a female in the finals. Sarah has to beat Sara Heesen’s time to move on. Unfortunately, she is too slow by just 3/10th of a second and will not move on to Vegas.

Brandon Mears is a 34 year old firefighter from Elgin, IL. He is good friends with Ethan Swanson and had hoped to make it into the finals with Ethan but he failed early. Brandon is 6 feet 5 inches tall but moves well through the obstacles. However, the Broken Pipes are too much for him and he is out. Neither friend will move on the next phase of the show.

Lance Pekus is a 30 year old rancher from Salmon, ID. He is the last competitor of the night and is known as the Cowboy Ninja. Can he be the first to finish the course tonight? Lance has been on the show several times before but this is the first time he has removed his cowboy hat during a competition. The Floating Monkey Bars is just too much for Lance and he falls into the water. No one completes the course tonight.