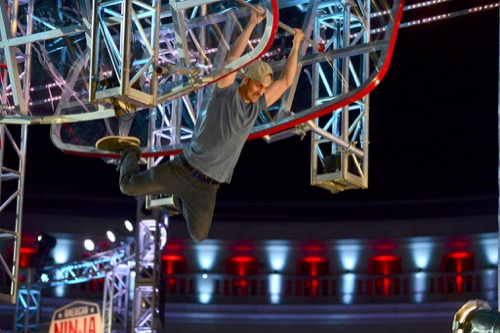 The show opens in Denver, CO and Matt and Akbar welcome the fans to the final night of the city qualifiers. This is the last opportunity athletes will have to advance to the live finals in Las Vegas. Kristine introduces the ten obstacles tonight and they are: the Floating Steps, the Warped Wall, the Ring Swing, the Bouncing Spider, Paddle Boards, the Rail Runner, the Salmon Ladder, the Wedge, the Ninjago Roll and finally the Elevator Climb. If a contestant can finish all ten obstacles they will be guaranteed a spot in Las Vegas.

The first contestant of the night is Ian Weber who is a 29-year-old shakerboard champion form Provo, UT. Also on hand tonight is the governor of Colorado, John Hickenlooper, who is excited to cheer all of the athletes on to victory. Ian has a strong start but the Bouncing Spider proves to be too much for him and he falls into the water. Next up is the first female of the night, Larissa Cottle. Larissa is a 24-year-old concrete worker from Lehi, UT. She is a strong athlete but also a proud mother to her two-year-old daughter. Larissa also starts strong but the Rail Runner kicks her butt and she falls into the water.

Brandon Todacheenie is a 29 year old stock clerk from Shiprock, NM. He is a Navajo Indian and has been preparing for the show for months. Brandon powered through the course but just can’t get up the Warped Wall. Jeri D’Aurelio is a 27 year old US Army Jag Corps Lawyer from Colorado Springs, CO. She has competed on the show several times before and hopes to take it all the way tonight. She does a great job but the Rail Runner is too much for her and she is out of the race.

Ben Antoine and Karson Voiles both tried the last during the last commercial break but failed. Brian Arnold a Colorado native form Brighton.CO is no stranger to the competition as this is his fifth appearance on the show. As in his previous attempts, the Wedge is more than Brian can handle and he plunges into the water. The Wedge is proving to be the downfall of many athletes tonight, as Michael Silenz and Dan Yager were unable to conquer this obstacle during the last break.The next contestant is Lorin Ball who is a

The next contestant is Lorin Ball who is a 30 year old gym owner from Denver, CO. He has appeared on all 9 seasons of the show and he hopes to have his best finish tonight. He has the best finish of the night but the Ninjago Roll is too much for Lorin and he ends up in the water. Andrew Duncan and Ryan Souter both attempted the course while we were at commercial break but he can’t finish. A true comeback story, Dalton Knapp is a

A true comeback story, Dalton Knapp is a 21 year old student and cancer survivor from Green Bay, WI. Dalton has a great showing but can’t get passed the Salmon Ladder. During the last commercial break Drew Knapp started the course. He was on the sidelines supporting his brother Dalton and now it is his turn to try the course. He is also defeated by the Rail Runner. Matt Dolce, a 30year old Pharmacist from Salt Lake City, UT is up next. He makes it all the way to the Salmon Ladder but then falls into the water on his dismount.

Closing out the evening is Meagan Martin. She is 27 years old, a professional rock climber and from Boulder, CO. This is her fourth appearance on the show and her parents and her training partners are on the side lines cheering her on. Meagan makes it all the way to the Wedge. She makes it further than any other woman tonight. Next week is the national finals.THE END