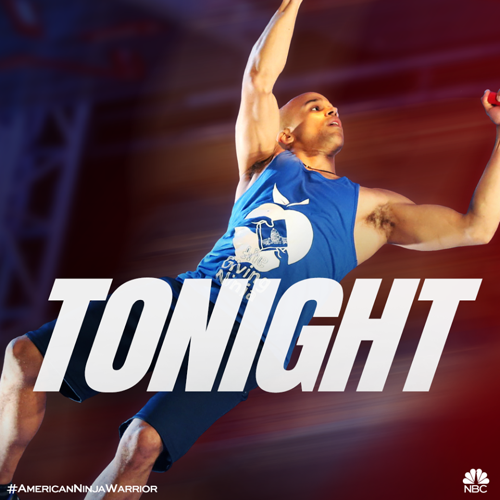 Tonight on NBC their obstacle course competition American Ninja Warrior returns with an all-new Monday, August 7, 2017, episode and we have your American Ninja Warrior recap below!  On tonight’s “Cleveland Qualifiers,” season 9 episode 9 as per the NBC synopsis, “Top competitors from the Daytona Beach Qualifier tackle the City Finals course, which includes the Salmon Ladder, Circuit Board, Elevator Climb and Giant Cubes.”

The show is set in Daytona Beach, FL tonight and Matt and Akbar welcome an excited crowd at the Speedway. Contestants will compete for a chance to move on to the finals in Las Vegas. Kristine introduces the ten obstacles tonight and they are: the Floating Steps, Wingnuts, the Rolling Pin, the Broken Bridge, Rolling Thunder, the Warped Wall, the Salmon Ladder, the Giant Cubes, the Circuit Board and finally the Elevator Climb. If a contestant can finish all ten obstacles they will be guaranteed a spot in Las Vegas.

Tonight’s episode is dedicated to never giving up. 34 athletes will compete tonight and give everything they have got to move on to the national finals. Eddy Stewart is a 34 year old firefighter from Hueytown, AL and will be the first contestant to tackle the course. Eddy almost falls into the water on his dismount from the Broken Bridge but is able to save himself at the last minute. Unfortunately, the eighth obstacle proves to be too much for Eddy and he falls into the water on the Giant Cubes. It is highly likely that Eddy’s performance will land him a spot in the finals in Las Vegas. Time will tell based on the other competitor’s performance.

Three more athletes faced the course while we were at commercial. Cedric Idudu, Bree Widener and Brett Sims all failed to complete the ten obstacle course. Josh Butler is a bus driver from Nashville, TN. His first son was born with a rare genetic and only lived 132 days but while they were in the hospital with their son they met a baby that had been abandoned in the hospital. After their son’s death Josh and his wife adopted the boy and have been a family ever since. Josh starts out strong but has trouble on the Wingnuts. He is able to complete it with extra effort. The Salmon Ladder proves to me too much for Josh and he is out of the race.

While we were away two more Ninja’s took a shot at the course. Both Ricky Vu and Bootie Cothran where no match for the course and were out very quickly. Twenty-four year old Michael Johnson, an event planner from Stone Mountain, GA is the next to attempt to complete the course. Michael’s mother died when he was very young and he was raised by his aunt. He is completing tonight for her. Michael fails on the Giant Cube. Time will tell if his time is good enough to move on in the competition.

[2017-08-07, 9:03:14 PM] Heather Brueck: Up next is Emily Durham, a 33 year old wakeboard coach from Orlando, Fl. She is a four time world champion wakeboarder. Her husband and four children are on site to cheer Emily on to victory. She just can’t get passed the Rolling Thunder and her arms give out as she falls into the water. Faris Xero and Oscar Ramirez both can’t make it passed the Salmon Ladder. Adriane Alvord doesn’t even make it that far as the Rolling Pin does her in.

Nick Patel and Alexio Gomes both made it further than any other contestant tonight but were unable to complete the course. Nick and Alexio will most likely move on the live finals in Las Vegas. Rigel Henry is a 29 year old construction worker from Wilmington, NC and is the next to attempt the course. This is his first year of Ninja training and he completed the qualifying course easily. Rigel is making great time and is at the half way mark in just 2 minutes 17 seconds. He just can’t make it off of the Giant Cube and tumbles into the water.
The Giant Cubes are proving to be the biggest road block of the night and three more Ninjas are unable to tackle this difficult obstacle. Dustin Fishman, Royall Eason and Reko Rivera are all defeated by the cubes. Kevin Carbone is a huge Ninja fan and is living the dream tonight. He is 21 years old and a tennis instructor from Alpharetta, GA. Kevin is the first to complete the Giant Cubes and the crowd goes wild. The next obstacle proved to be too much for him and he falls into the water on the Circuit Board.

Two more athletes took a shot at the course while we were away. Ryan Stratis and Tyler Gillett both made good attempts but could not complete their runs. Thirty year old stuntman, JJ Woods from Miami, FL is up next. He is competing for an eight year old girl who is a family friend and has been fighting cancer. JJ wants to win it all for Zoey. JJ makes it further than any other competitor but falls just 8 feet from the buzzer. He will be moving on to the finals in Las Vegas.

Lindsay Eskildsen is the second female competitor of the night. She is 35 years old, a web developer and from Sacramento, CA. She was a competitive gymnast before moving on to cheer leading. She has been on the show several times before. Lindsay’s boyfriend is also a Ninja athlete. She can’t get passed Rolling Thunder but qualifies to move on to the finals. Les Bradley and Steven Cen attempted the course earlier in the evening but both failed.

The city finals course was too much for Cassidy Marks and Lucas Gomes while we were away. Lucas made it further than his brother and earns a spot in the finals. One of the post popular athletes of the night, Sean Darling-Hammons, a 32 year olf lawyer from Washington, DC is the next to compete. Sean starts the last task, the Elevator Climb, but just can’t make it to the top.

Jessie Graf is the last female of the night to attempt the course to get one step closer to one million dollars. She is a 33 year old stuntwoman from Calabasas, CA. She went further than any other woman in last year’s competition. She was defeated by Rolling Thunder and worries she may not be able to beat it this time. Her mother and sister are on site to cheer her on. This time Jessie makes it passed Rolling Thunder. She easily scales the Warped Wall guaranteeing a spot in the finals. Jessie fights hard and completes the Giant Cubes. She is now half way through the eighth obstacle of the night, the Circuit Board with a smile on her face. She finishes it and tackles the last challenge, the Elevator Climb. If she can make it to the top she will be the first of the night to finish the course but just can’t quite hang on. Jessie earns a spot in the finals.

Drew Drechsel is a 28 year old gym owner from Hamden, CT and is the last competitor of the night. Will he be the first of the night to complete the course? He is a fan favorite and has been on the show several times before. Drew makes it look easy and faces the Elevator Climb with a big smile on his face. He finishes the course at 7:34.60 and will compete in Las Vegas for the million dollar prize.