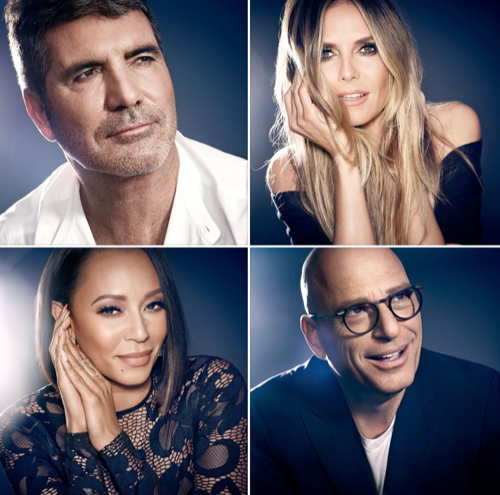 Tonight on NBC America’s Got Talent begins its new season with an all-new Tuesday, June 20, 2017, episode and we have your America’s Got Talent recap below!  On tonight’s AGT season 12 episode 4 as per the NBC synopsis, “The auditions continue with creator and executive producer Simon Cowell at the judges table alongside Mel B, Heidi Klum, Howie Mandel and host, Tyra Banks.”

Creator Works is a group of 44 gospel singers made up of police officers, teachers, hair dressers and more. They live in different cities throughout the county and practice together online. They sing, This Little Light of Mine. The crowd and judges love it. They get four YES votes and move on to the next round of competition.

JJ is a Rock-N-Roll keyboard player from Cleveland Ohio. Heidi gives him the no buzzer before he finishes his song but he gets YES votes from the other three judges. JJ moves on to the next round.

The next group is from the Ukraine and is called Life Balance Dancers. They hope by winning the show they can bring their families to a better life in America. Their act is a big hit and they get four YES votes. Heidi loved their creativity and Howie thinks they should feel very proud of their performance. Simon thought they were incredible. Tyra hits the golden buzzer and the group will move on straight to the live show.

Anthony Penoso is a 58 year old attorney who has always dreamed of making it as a singer. He sings an original song he wrote, Young Enough. All four judges hit their buzzer before he even finishes his second sentence. His voice is awful. He keeps singing even after he is buzzed. Anthony gets four NO votes. A dance crew from South Korea is the next act to take the stage. They are called Just Jerk Crew and they hope winning the show will change their lives. When they return to South Korea each member will have to serve two years in the military. Howie and Simon both have never seen anything like them. Mel was blown away. They get four YES votes and move to the next step of the competition.

Celine Tam is nine years oldsand loves to sing. She has been singing since she was three years old and is names after Celine Dion. She sings My Heart Will Go On and Simon can’t believe she is really singing. He thinks she is incredible. Howie finds her adorable and all four judges vote YES. She moves on and is thrilled.

Colin and Kevin make up the group, Men with Pans. They take the stage naked using pans to cover their private parts. Mel and Simon buzz them immediately but the audience finds them very funny. Heidi thought they were hilarious. Howie and Heidi vote YES. Simon votes NO. The audience gets Mel to change her mind and she votes YES. Men with Pans move to the next round. The Four Godfathers perform an amazing balancing act and wow the audience and the judges. The get four YES votes and move on. A Robert De Niro impressionist named Robert takes the stage. He banters with the judges and begins to read nursery rhymes. The audience boos him and Simon, Mel and Heidi buzz him. He gets three NO votes and is done in the competition.

Tom London is a 25 year old magician who dreams of performing in Las Vegas. He does an amazing act with numbers. The judges and the audience love him. Howie loved the variety and Tom gets four YES votes.

Bello Nock is 47 years old from Sarasota Florida. He is a clown and knows that Simon doesn’t like clown but thinks his act is something Simon has never seen before. He takes the stage and climbs a 37 feet high pole. As he reaches the top the pole starts to sway. He does several moves and the audience loves the show. Howie, Heidi and Mel vote YES. Simon at first votes NO but Bello convinces him to give him a second chance. Bello gets four YES votes.

Darcy sings and Simon thinks he has an amazing voice. He chose his song to honor his dad. He makes it through to the next round. The final act of the night is 13 year old Evie Claire and she is singing for her dad. He was recently diagnosed with cancer and her singing helps him keep his spirits up. She sings Arms. Her voice is beautiful and the audience loves her. The judges were very moved by her performance. She gets four YES votes.