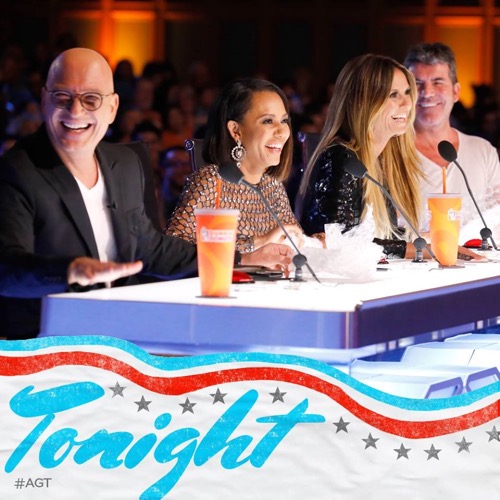 Tonight on NBC America’s Got Talent begins its new season with an all-new Tuesday, July 10, 2017, episode and we have your America’s Got Talent recap below!  On tonight’s AGT season 12 episode 6 as per the NBC synopsis, “Auditions continue. Variety acts of all types and contestants of all ages audition for the chance to win the $1 million prize.”

Tyra welcomes Angelina Green and her mother to the show. Angelina is 13 years old and has been singing since she was very young. She found comfort in singing when her parents got divorced. She and her mom have been through some very rough times and she calls her mom her best friend. She sings “I’ll Stand By You” by the Pretenders. She has a beautiful voice and the crowd and judges are very moved by her performance. Howie and Mel loved her performance. Her performance was Simon’s favorite. She gave him goosebumps. Heidi tells Angelina she is an old soul and hits the golden buzzer. She automatically moves on to the live finals.

The next act to take the stage is The Quiddlers from Las Vegas. They have been performing together for ten years. They dance to “YMCA” on their hands and knees to look like small people. The crowd and judges crack up. They get four YES votes because they are hilarious. Veronica Gonzales is up next and performs a puppet show with her feet. She is also very funny and the judges give her four YES votes. Brobats and Mandroids are high school students from Torrance, CA. They are a dance troupe and complete amazing jumps and acrobatic moves. They get a huge reaction from the crowd and get four YES votes.

Eileen George is a school administrator and while she is a thicker woman she completes an amazing pole dance and gets four YES votes. Heidi believes that the performance was directed at Simon who loved her moves. Harrison Greenbum is a Harvard graduate who realized while he was in college that he wanted to be a comedian. He wants to do well to prove to his parents that he made the right choice after they paid for college. He is a big hit. Simon thought he was really funny and Heidi could tell he is very experienced by how naturally he delivered his routine. Mel found him to be a very likable guy and Howie thinks this performance is the tipping point for Harrison to making it big. He moves on in the competition with four YES votes.

Jonathan Rinny is a 25-year-old from Argentina and he is on the show with his wife, Caroline. They are newlyweds and he hopes to prove his worth to his in-laws with his performance tonight. He does several balancing tricks on a platform high in the air, one of which is balancing on a stack of five skateboards on top of a cylinder. Simon thinks he was the best roller bowler he had ever seen. All of the judges were on the edge of their seats. He gets four YES votes.

Mike Yung is a subway singer and has been making a living doing it for 37 years. He belts out “Unchained Melody” and has an incredible voice. Mike gets a standing ovation. Heidi thought he was a little rough around the edges but the crowd BOOS her for her comments. Howie thought his roughness is what made him great. Mel also makes a negative comment and Simon calls her out on her comments and says he was great. Simon gives the first yes followed by Howie. Mel votes no and as Heidi is about to vote the crowd cheers her on and she decides to vote YES. Mike moves on to the next round.

Danil and Oskar are a father and son team. Oskar is 8 years old and they have been performing together for 3 years. They dance and Danil holds Oskar over his head and balances him as they complete different dance moves. The crowd has a huge reaction to the performance and they get four big YES votes from the judges.

Trent and Colton Edwards are 16 year old twin boys who perform as “Mirror Image”. They start by singing The Jackson Five’s “Who’s Lovin You” and then break into a Black Eyed Pea’s song as they perform several amazing dance moves. Heidi wants to adopt them both. Mel thought they were very entertaining. Simon didn’t know what to think and votes NO but the other three judges vote YES and they move on.

Team India is two martial art performers. One is blind folded and cuts up veggies that are taped to the other one’s body. Howie, Mel and Heidi buzz the performance but Simon loved it. They get three no votes and don’t move on. Tony is a comedian and also gets three buzzers and no votes from Heidi, Mel and Howie. Minnie is a singer and is almost immediately buzzed by Howie, Mel and Heidi. She gets three NO votes. The Enema Bandit is the next to take the stages and is a comedian who isn’t funny. She is buzzed and gets NO votes from Heidi, Mel and Heidi. Simon loved all of the crazy performers but none of them move on. Brandon Rogers is a doctor who practices family medicine in Virginia. He is the last performer to take the stage and has an unbelievable voice. Brandon sings Stevie Wonder’s “Ribbon in the Sky” and blows the audience and judges away. He gets for YES votes.