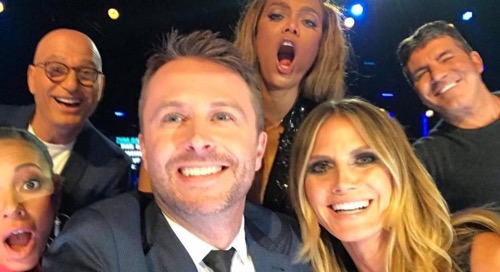 Tonight on NBC America’s Got Talent begins its new season with an all-new Tuesday, July 18, 2017, episode and we have your America’s Got Talent recap below!  On tonight’s AGT season 12 episode 7 as per the NBC synopsis, “The Judge Cuts kick off with guest judge Chris Hardwick joining the panel.”

The first night of the judges cut starts tonight. Tyra introduces Chris Hardwick who joins Howie, Heidi, Mel B and Simon as the special guest judge for the evening. He is the only one who can use the golden buzzer tonight to send an act straight to the live finals. The first act to perform is Sara. She and her dog Hero made it to this phase of the show because Simon convinced the other judges to vote for her during her first audition. Tonight Sara has added more of a story line to the performance. She and Hero are burglars who steal a bone. Hero did more tricks and the music was much more energetic. Tonight 20 acts are competing for just 7 spots.

The Masqueraders are three gentlemen who have been singing together for years. They are a group of 70 year old plus men who have had a dream since they were young. Tonight they hope their dreams come true. Howie and Heidi both think this is the group’s moment. Chris was honored to be in their presence. Simon knows America has fallen in love with the group. Eric Jenner is a comedian who likes to make some noise. Simon hates him but Chris and Howie love him. Mel knows they will have a lot to talk about later tonight. Harris Greenbaum is the next comedian to perform and Howie thought he was brilliant and will fight for him to move on.

The Dancing Pumpkin Man is the next act and is from Nebraska. Chris knows him from his act on the internet. He does a strange dance and Heidi gives him a buzzer but Chris and Howie thought he was great. Simon will have to think about it as they talk later on. Tom London is the next to perform. He is a magician and he is amazing. Both Mel and Chris are blown away by his act. Simon tells him his magic is incredible but now he needs to learn how to be a great performer.

Eric Jones is the next magician to take the stage. He does card tricks and uses a hammer. Simon and all the other judges are very impressed by Eric. Angelica is only 9 years old but is an amazing singer with a huge voice. She sings “Girl on Fire” by Alicia Keys. Howie thinks Angelica has a very good chance of winning the entire show. Chris pushes the golden buzzer sending Angelica directly to the live finals. Eight year old Osker and his father Danylo perform their amazing balancing act followed by 9-year-old twins Lera and Nika Tomanova. The kids are in top form and the judges know they will have a very hard deciding who will move on to the next phase of the show.

Another balancing act takes the stage. Yusain will be using daggers in his act and has increased the danger in his act based on the feedback he got from the judges. Heidi held her breathe during the entire act and Simon was completely won over by Yusain tonight. Darcy Cullam takes the stage and sings his heart out. Carlos De Antoiss is 55 years old and is from Argentina. He is an opera singer and tells the judges that winning the show would change his life. He gets a standing ovation from the audience and the judges.

Kenyan is very nervous but starts his dancing act with lights and is buzzed by both Heidi and Simon almost immediately. He is off the show. The judges think his nerves got the best of him and he almost frozen on stage. The South Korea dancing troupe, Just Jerk, are the next dance crew to take the stage. Their moves are beautiful and they are very entertaining. Mel B tells them have taken the show to a whole new level. Simon was so impressed with the work they have put into their act.

Maw Kitty is a 69 year old woman who is not a very good singer but flirts crazily with Simon while she sings. Mel B and Howie both buzz her performance before she finishes. Howie found her to be somewhat scary. Maw Kitty is out. The Singing Trump is next up. He is again very funny. He sings a Back Street Boys medley and has the dance moves to do along with it. He has four backup dancers dressed as secret service men. Everyone loves his act. Demian is an escape artist who will be buried alive in one of the most dangerous acts ever to be performed on the show. Everyone has moved outside for Demian’s show. He will be handcuffed and chained before he is placed in a ten foot hole. The hole will then be covered in sand. He amazingly escapes and Simon almost had a heart attack.

The performers return to the stage in groups to hear the judge’s decisions regarding who will be moving on in the competition. Carlos, the Masqueraders and Darcy come together but only Masqueraders make it to the next level. Nika and Lera, Oskar and Danylo, Sara & Hero and Yusain are the next group to hear the judge’s decision. Sara and Hero will be moving on. Eric Jenner, Harris Greenbaum, and The Baker Family are eliminated. Singing Trump and Dancing Pumpkin are on the stage and only Singing Trump moves on. Both Demian and Just Jerks move on. The magician to move forward is Eric Jones.

The acts moving on are the Masqueraders, Sara & Hero, Demain, Just Jerks, Dancing Trump, Eric Jones and Angelica who go the golden buzzer earlier in the evening.