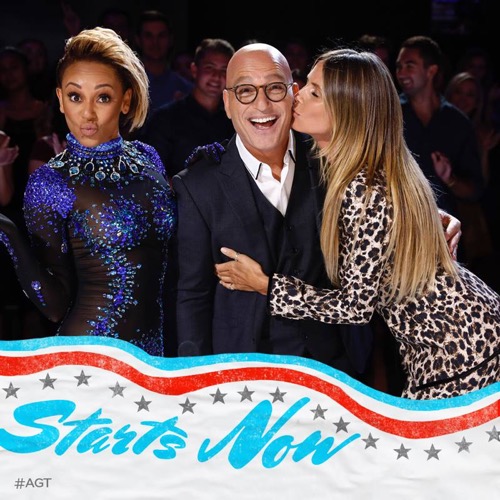 Tonight on NBC America’s Got Talent begins its new season with an all-new Tuesday, August 15, 2017, episode and we have your America’s Got Talent recap below!  On tonight’s AGT season 12 episode 11 as per the NBC synopsis, “Twelve acts compete at the Dolby Theatre in Los Angeles.”

The Live Show begins with Tyra Banks taking the stage. She introduces Simon, Mel, Howie and Heidi. Simon is sure that something will go wrong tonight. He just doesn’t know what it will be. The first act is Christian Guardian. He was Howie’s Golden Buzzer and he sings “The Sins of My Father.” His voice is amazing and Howie thinks he is just magic. Mel and Heidi both think he set the bar very high and Simon is sure he will make it through to the next round. Tyra encourages the viewers to vote.

Artyon and Paige take the stage and dance to “Footloose”. They are adorable eight and nine year olds who rock the auditorium. Mel thought the performance was electrifying. Heidi thought they were an explosion of talent. While Simon was not a big fan before he thinks they really stepped up their performance and he was impressed. Howie couldn’t stop smiling. The viewing audience will decide.

The next act is made up of cadets from the US Airforce Academy. They are called “In the Stairwell” and are an acapella group. The group is made up of 15 young men ranging in ages from 18 to 24. They receive a standing ovation from the judges and the audience. Howie think they stepped it up from their last time on stage. Mel found their harmonies yummy and wanted to make sure they know she is single. Simon is impressed with how much work they have done and thinks their hard work shows. Tyra reminds the viewers at home that they can vote up to ten times.

The Singing Trump won the judges votes last time around but Tyra asks if he can win America’s votes. The act is a Trump impersonator and he sings a medley of “Shut and Dance with Me and Can’t Touch This.” Mel says she has a love hate relationship with him. He started very weakly and his timing was off but he did recover. He definitely made Howie laugh. Simon says it is up to America to say if they want to see any more of the Singing Trump.

Nine year old Angelica Hail got the Golden Buzzer during her last performance. Tonight she sings her heart out. Mel almost cried based on this performance. Heidi was blown away with how Angelica hit the high notes. Simon thinks she is such a special girl and her performance was just amazing. Howie thinks she is in it to win it. Tyra hopes America will send Angelica to the semi-finals.

Tyra reminds viewers that voting is now open. Simon called the other judges and convinced them to give Bello Nock another shot after he was shot out of a cannon over a helicopter on the last show but didn’t get enough support to move on to the live show. This time he will attempt the Wheel of Death. His act is very thrilling and he keeps everyone on the edge of their seats. Heidi was freaked out but loved it. She thinks he is CRAZY. Simon salutes him. He deserved to return. There is no doubt about it. Howie says it is called the Wheel of Death for a reason. All Mel can say is well done!

Just Jerk is a dance crew from South Korea. They are hoping to make the American Dream come true. Mel loved the entire act. She thought they were so on point, their energy and their choreography were just over the top. Heidi was not as impressed. Howie encourages the home viewer to VOTE VOTE VOTE. Tyra reminds everyone they can use the App, online or by phone.

Puddles the Sad Clown is the next to perform. He sings “Royals” but before he finishes his song Simon hits his buzzer. Simon just wasn’t feeling it but Howie loved it. He says he is a sad clown inside also. Mel loves his persona and can’t wait to see what he will do next. Heidi just isn’t sure. She wants a happy clown. America’s votes will decide Puddles fate.

Comedian Preacher Lawson has been trying to make it as a comedian for 8 years. He has been in Los Angeles and has played every possible venue. Tonight he hopes to make his dream come true. Everyone is on their feet. Howie tells America he has to go all the way. Mel adores him and his act. He has great energy. Heidi didn’t love his jokes this time but thinks he has a star quality. Simon hopes someone out there in the industry is watching tonight and takes Preacher on to make him a star.[2017-08-15, 10:00:20 PM] Heather Brueck:

Yoli Mayor is a Cuban singer from Miami, FL. Her performances on America’s Got Talent have given her so much confidence. She sings “I Am Only Human.” Mel adores Yoli but felt like her performance tonight was just off. Something was missing but she can’t say what it was. Heidi disagrees and thinks Yoli killed it tonight. Simon loves her but thinks she was over produced tonight. Her voice got lost.

Billy and Emily England are a brother and sister team of stunt roller skaters. Heidi says watching their act never gets old. They are entertaining and death defying. Simon says their act is perfection. Howie again encourages everyone at home to vote for their favorite acts.The last act of the night is Darci Lynn. She is a

The last act of the night is Darci Lynn. She is a 12-year-old ventriloquist and she blows the audience and judges away. Mel hit the Golden Buzzer for Darcy during her first performance and loves her again tonight. Heidi finds Darci’s act incredible. Mel thinks she is out of this world. Simon tells Darci to get ready for the big time.