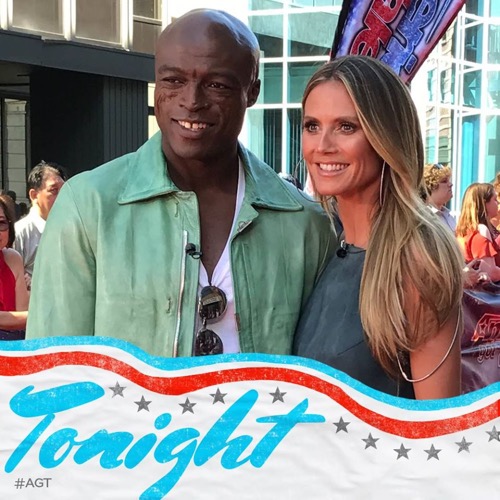 Tonight on NBC America’s Got Talent begins its new season with an all-new Tuesday, August 8, 2017, episode and we have your America’s Got Talent recap below!  On tonight’s AGT season 12 episode 10 as per the NBC synopsis, “The Judge Cuts continue with guest judge Seal joining the panel.”

The show opens with Howie, Simon, Mel B and Heidi entering the auditorium. Tonight 20 acts will compete for just 7 spots on the live show in Las Vegas. Heidi introduces the special guest judge for the evening, Seal. Tyra tells the audience that Seal is a Grammy award artist who has sold over 300 million records in his career. The audience goes wild as he takes the stage. The first act of the night is Artyon and Paige. They are eight and nine-year-old dancers. Paige says they plan on getting married when they grow up. Mel and Heidi loved their act. Simon said that they went from annoying to very entertaining. Howie says he likes them but there are only 7 spots so time will tell if they move on.

Britt Saasen is a 21-year-old singer who is obviously nervous as she takes the stage but Simon offers her encouragement. She sings a Fleetwood Mac song. Seal tells her she has to believe in herself. Her self-doubt came through in her performance. Simon said it was not a memorable performance. The next act is In The Stairwell, an acapella group of men in the Air Force Academy. Seal gives them a standing ovation. He is very impressed with their discipline. Howie thinks they stepped up their performance from their first time on the show but he doesn’t think it is a million dollar act. Simon loved their energy.

Close-up magician Will Tsai is the next to perform. He does not impress the judges. Simon thinks it was a step back from his first performance and Seal says it is a definite no for him. Henry is 15 years old and also a magician. He is performing for his dad who died recently. He does a great job and the judges love him. He has all of the judge’s support.

Elena and Sasha do a dare devil act but Simon is not impressed. The Lost Legends are the next dare devil act to dance and run with fire and Simon hits the buzzer before they even finish the act. Nick Uhas is a scientist who makes science fun. Simon buzzes him immediately. Simon is just not in the mood for anyone who is less than stellar. Veronica is the next act and completes a puppet show with her feet. Simon hits his buzzer again. Sirqus Alfon are next to perform and are very afraid to take the stage based on Simon’s mood. He enjoys their act and thinks they were very funny. Seal offers them a job if they don’t win.

DaNell Daymon and the Greater Works is a group of gospel singers from around the country. They want to take their message of hope around the world. The judges and audience give them a standing ovation. Mel will vote for them to return for sure. Seal could feel their joy and Simon thinks they are amazing. The Pompeye family performs with their trained dogs. Their act is very cute and entertaining. Simon thought it was fun and loved it. Heidi knows it will be tough deciding who gets to move forward.

Lil Johnny had a record contract when he was just 17 but then lost it all and was very depressed. America’s Got Talent has given him his will to live again. Simon is not impressed with his performance and asks him to sing a different song. After he does Seal hits the golden buzzer and Lil Johnny is ensured a spot on the live show in Las Vegas. Now there are only 6 spots left.

Maria is competing against her husband. Both are performance artists who do gymnastic type moves. Simon hits his buzzer about 30 seconds into the act. He kept waiting for something to happen. Seal agrees. The act was boring. Maxim is up next and the judges find his act incredible. They were on the edge of the seats and loved it!

The German Cornejo Dance Company take the stage and Howie loves them. He thinks they are sexy and hot. The Honeybee-z Plus are a group of women from Alabama State University and Mel really liked them. Merrick is a 12-year-old dance and has loved to dance since he was very young. Simon was impressed with his first audition. Howie promises Merrick he will fight for him after he sees his performance. Heidi just doesn’t know because there are so many great acts tonight. Time will tell. The last act of the night is Kechi. She takes the stage and is excited to perform. She was in a horrible plane crash as a child and has suffered through so much to get where she is today. She sings “A Song For You” by the Carpenters. Howie thinks they are so lucky to have her there.

The acts to move on are Lil Johnny, In The Stairwell, The Pompeye Family, DaNell Daymon and the Greater Works, Artyon & Paige, Merrick and Kechi. Next week the live shows begin.