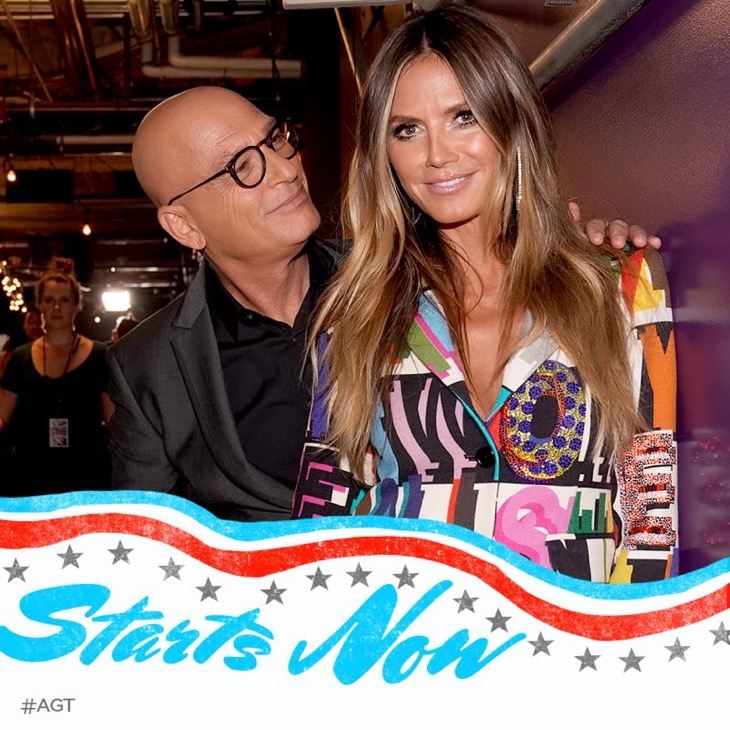 Tonight on NBC America’s Got Talent begins its new season with an all-new Tuesday, September 5, 2017, episode and we have your America’s Got Talent recap below!  On tonight’s AGT season 12 episode 19 as per the NBC synopsis, “Semifinalists perform for a chance to win $1 million and be named the most talented act in America.”

Tyra welcomes everyone to the live semi-finals in Hollywood. She introduces judges Howie Mandel, Mel B, Heidi Klum and Simon Cowell. Eleven acts will perform tonight but only seven will move on. Yoli Mayor is the first performer to take the stage. Simon loved her beautiful performance and Mel thought it was so well done. Heidi was moved to tears and Howie hopes America will vote for Yoli. Yoli is so grateful to be on the show and thanks everyone who voted for her. Tyra reminds everyone to vote. They have until tomorrow morning to make their note count.

As the show returns from commercial Tyra welcomes Eric Jones. He is the only magician left in the competition and he is performing for his son tonight. He opens his act with several tricks using coins. Eric incorporates each one of the judges into his act. Howie loved his act and ask America to vote for Eric. Mel thinks Eric is a real super hero and Heidi loved his delivery. Simon thinks Eric was much improved from his last appearance and really thinks Eric is ready for the big time.

Danell Davis and Greater Works takes the stage after Danell shares the struggles he has had in his life. They are a gospel group formed by members from all around the country. Their performance tonight is very emotional and all four judges were overwhelmed. They all loved the act and Tyra again reminds America that they have to vote if they want to see Danell and the Greater Works remain in the competition.

Comedian Preacher Lawson is the next act to take the stage. He presents a hilarious act and Simon can’t understand why he hasn’t made it big already. Simon and Howie both think he is so talented. Mel and Heidi also think he is about to make it really really big. Howie and Tyra both remind the home viewer to vote for Preacher and all of their favorite acts tonight. The votes tonight will determine who move on in the competition.

Tyra introduces Johnny Manuel. He is a singer who already made it big once in his life but he lost is all and hopes America’s Got Talent is his second chance. Howie thinks Johnny is the most talented technical singer left on the show but he didn’t like that he sang an original song tonight. Mel agrees with Howie. Both Heidi and Simon disagree. They loved his original song and thought he hit it out of the park. He took a chance and they both think he won with his choice.

The incredible rolling skating sibling duo of Emily and Billy England take the stage and provide major excitement. At the end of the act Billy lets Emily go and she flies onto the stage. The judges are shocked and in awe. They loved the show and were on their feet with excitement. Simon says they are the reason AGT is such a popular show, because of this kind of act. All the judges hope they make it to the next round of competition.

Thirteen year old Evie Claire is the next act to take the stage. She is performing tonight for her dad. He is too sick to be at the show tonight but is watching from home. He has been fight stage four cancer and the show has been giving him the strength to carry on. She provides a heartwarming performance and Simon and Heidi are on their feet by the end of her song. Simon thinks she has such guts and her voice and song was just beautiful. Simon tears up as he tells Evie he is sure her dad is very proud. Heidi and Mel think her performance was just great.

Tyra welcomes Sara and Hero to the stage. Sara has been training and loving her dogs for years. She says they saved her life and she is so happy to have the opportunity to show them off to the world. The crowd goes wild for their performance and is on their feet by the end of the show. Simon tells America that he needs this act in the finals. Mel and Howie just keep laughing as the dogs tug on their Frisbee. They really are a fun act to watch.

Chace Goehring is the next act to take the stage. He will sing an original song that tells a story of lost love. Simon loved Chace’s originality and the fact that he stays true to himself. Mel agrees with Simon and wants him to keep it up. Howie thinks if Ed Sheeran and Logic had a child it would be Chace. Heidi thinks many girls in America right now are falling for Chace. She hopes they vote to help Chace move on to the next round of competition.

Ventriloquist Darci Lynne has been working with puppets for a very long time. Tonight her puppet sings a song for Simon and the both the judges and crowd love her performance. Simon thinks the act was brilliant and he thinks Darci could have her own show. Mel was mesmerized by Darci and thinks she could will the whole show. Heidi thinks she is a class act and Howie thinks tonight has been just amazing. Tyra tells everyone at home they can vote up to ten times tonight to keep their favorite acts on the show.

Mike Yung is the last act of the night. He has been singing in the subway for over thirty years and hopes to make it big. He sings for his mom tonight and his song is “Don’t Give Up On Me”. All four judges loved him and think tonight was his best performance yet. Tyra tells the home viewers they can vote online, using their phones or the show app. Tomorrow night we will see who America voted to keep and who will be sent home.