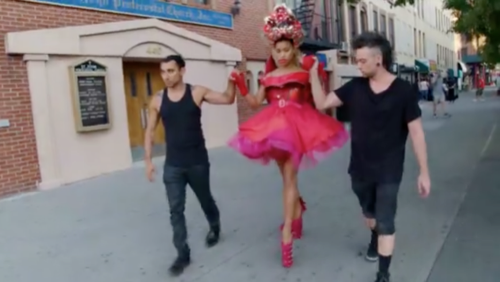 Tonight on VH1 America’s Next Top Model (ANTM) airs with an all-new time.  ANTM airs with an all new Monday, January 9, 2017, cycle 23 episode 5 called, “Avant Garde” and we have your weekly American’s Next Top Model recap below.  On tonight’s ANTM episode as per the VH1 synopsis, “Law Roach discusses the importance of personal style with the ladies. Later, celebrity designer Nicola Formichetti introduces the models to avant-garde fashion.”

America’s Next Top Model (ANTM) begins tonight with Cody excited for the next part of her journey alone. She is sad to see her sister Tash eliminated from the competition but she is now focusing on relaxing and herself. She is hoping they can stop talking about the twin thing.

Krislian is excited that she won best photo in the last challenge. CoryAnne is upset that she was in the bottom again. Tatiana wonders how many chances CoryAnne is going to get before she leaves the show too. CoryAnne says America loves the underdog so she isn’t too worried about it, other than the fact that no one is going to want to work with her.

Paige and Kyle are sick of Courtney being such a pig. She brought the first aid kit in their room and made a mess. Courtney says that Paige could have just asked her but she gets that she is PMS’ing and tells her to chill. Kyle says she is sick of people, admitting she loves to be alone, so living with a bunch of people is a situation she is unfamiliar with and frustrating. She tells Paige she is done with the whiners and pity parties, they are driving her nuts.

The models are called to the living room when Law Roach arrives at the house. Tatiana says in her head, her and Law are besties and they have great chemistry. He comes to talk to them about their own personal styles. He says of course they love red carpet clothes but they are also interested in what people are wearing walking down the street. He references the Kardashians or Hailey Baldwin.

Law tells the models it doesn’t take a lot of money to create a personal style. He wants to talk about their personal style and their individual brands and how do they see themselves. He agrees with some of them, but says he wants to work with some of them on their own views and brands even telling CoryAnne she isn’t memorable that he cannot even remember what she wore at the last panel.

Their challenge this week is to show them a clear definition of their own personal style, using their own clothes. He gives them 15 minutes to complete the challenge. They all run off to their rooms to gather their stuff and prepare. They all are feeling the pressure. Some hit their brand and others are way off the mark.

Law informs the models that the winner will receive an entire collection of his and Zendaya’s shoe line. The winner of today’s challenge is Tatiana. She hugs Law and thanks him. She says some of the girls finally realized she is competition for them.

A RitAlert arrives and her tip is “wear the clothes, don’t let the clothes wear you.” She disappears, telling them she will see them soon.

The models get off the bus in Harlem and they walk into a grocery store. They meet with Drew Elliott who tells them they are not there to grocery shop, its the site for their next photo shoot. Fashion is art and some of the most amazing editorials take the mundane tasks and turn them into beautiful imagery.

Drew’s friend Nicola Formichetti, who has also dressed Lady Gaga, is there to take them all out of their comfort zone into the world of avant garde fashion. He tells them to make sure they wear the clothes and the clothes do not wear them. Nicola picks the models outfits and meets with them all to bring out their essence. A lot of the models do a great job, but are nervous about the extreme clothing and shoes.

At the modeling shoot, Kyle fell while walking in the extremely high and unusual shoes. Giah is laughing along with a number of the other models. Kyle admits that she isn’t a strong heel walker, and says she will probably break an ankle doing this shoot.

Drew says that CoryAnne is doing a fantastic job and Nicola says this could very well be his favorite picture. Paige can’t pose a certain way because of the steel bars in her back and she apologizes. Marissa is having the time of her life, pouring milk all over her.

India looks like a present with all the bows on her, but she does a great job. Kyle, on the other hand, is having a difficult time posing and looks very angry. Drew admits that he is having a harder and harder time getting behind her because she always brings the same look, like she wants to beat you up. He pushes her to get out of her comfort zone and says right now he would kick her out of his grocery store. Kyle is worried it is too little too late for her.

Back at panel, the models meet judges Rita Ora, Law Roach, Ashley Graham, and Drew Elliott. Rita is excited to see how they all did in the Avant Garde photo shoot. India is praised for her photo from everyone. Krislian was lost in the outfit and no one was too impressed. Binta’s photo is beautiful. Ashley says she is exquisite and a fashion girl.

Paige is told by Drew she is sexy, Britney Spears in the meat department. Ashley says she elevates every time and it is fantastic she is understanding her look. Cody’s photo comes up and Rita says she just got goosebumps and she is fabulous. Law tells her the photo is amazing and wants to look at it for ever and ever. Rita says she has the face of a boss. Drew tells her Nicola says she was the best photo shoot he has done.

Drew asks what it is like without Tash? Cody says a lot of her life she wanted to run away from the twin thing, wanting to be her own person and her sister got offended by that but her coming out as an individual doesn’t make them any less as twins. Law feels her confidence level has risen since Tash left.

Drew tells Giah this was a tough shoot for her and he had to pose her in every shot she did. Drew said that she is a beautiful woman but she isn’t a model. Rita tells her she didn’t come into the industry as a super model either, but she needs to be able to do it all and this photo shoot wasn’t doing it all. Giah begins to cry. Ashley says it is okay to not always be a avant garde model, and she is here to learn, but she needs to learn to fake it. Marissa’s photos were fun it the concept really worked in her favor this week.

Courtney is told by Law that no one can deny she has a face. He says she was born to do this. Ashley says this was her shoot and she was blown away but doesn’t get warm and fuzzies from her. She doesn’t even know if she likes her, but she wants to because she kills it every week. Rita does bring up the drama in the house. Drew pipes up saying she complains like no one’s business and she has to stop it or she will mess this up. He tells her if she doesn’t fix that, he will make sure she doesn’t stay there. Courtney agrees 100%.

CoryAnne’s photo is brought up and everyone is in awe. Ashley is screaming. Rita says that photo is the very definition of a boss and she needs to look at that picture and remind herself that there is no way she is bottom two. Law says her personality is coming out and after this photo shoot she should have no problem with confidence. He says it is amazing.

Tatiana’s photo is fabulous. Ashley tells her she is the look, the brains and the business. She tells her she believes in her. Drew says she is a definite contender, but there is a lot more to sculpt. Kyle is the last one up, and Drew says she is very consistent and very comfortable in the character of Kyle but he wants to see her expand the Kyle brand into something that will shock them.

Law says Kyle has it the easiest of all the models because she already has a distinctive look. Rita says she doesn’t feel it or feel her. Law says he is beginning to have a problem with her attitude. Just by the way Kyle is standing, he feels it is disrespectful in a way. Law says they are looking for a model and a mogul and he isn’t sure the mogul part of it is in Kyle.

The best photo goes to CoryAnne. As Rita is about to announce the bottom two she tells the judges they are making a mistake. Ashley says they are not and they spoke about it. Rita approaches the panel and talks to them. Ashley says the majority rules and Rita returns to the models. She apologizes and calls Krislian to her, telling her that she needs to kill her next week.

The last two are Giah and Kyle, they are asked to step forward. She tells them it was a very hard decision and they are not all in agreement. She tells Kyle she has a distinctive edge that should give her an advantage in the competition but she can’t just rely on a cool look to be a boss. She really needs to bring out her personality.

Rita tells Giah her personality is what they are looking for in a boss, and they have loved watching her transform but the judges are worried that she isn’t nailing her photos. She asks if she can catch up to the other girls. Giah is crying and Rita congratulates Kyle, telling her she made it another week and still has a chance to be America’s Next Top Model. Kyle joins the other girls.

Rita comforts Giah, telling her she doesn’t believe this is the end for her. The models come forward to hug her. Giah thanks them for the opportunity.