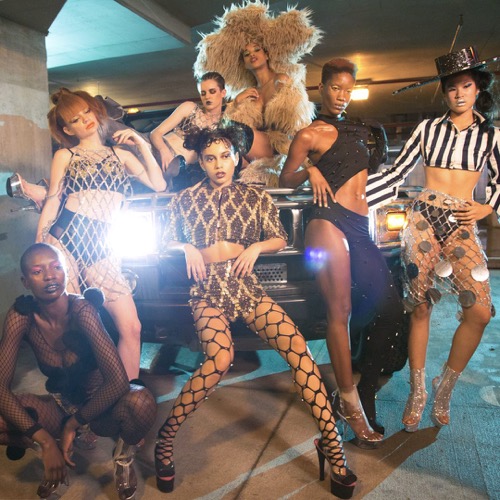 Tonight on VH1 America’s Next Top Model (ANTM) airs with an all-new time.  ANTM airs with an all new Monday, February 1, 2017, cycle 23 episode 9 called, “The Comeback” and we have your weekly American’s Next Top Model recap below.  On tonight’s ANTM episode as per the VH1 synopsis, “The previously-eliminated contestants return to compete against the top seven models in a fashion-music-video shoot featuring rapper French Montana.”

Kyle was gone however she was far from being forgotten. Kyle as it turns out had left behind a letter/ poem for the other girls in the house and it had genuinely made her crush do some self-reflecting. Marissa had once thought she was the best there was in the competition and she had come close to being sent home. So Marissa was calmer this week and a new drama queen had unfortunately taken her place on tonight’s episode. The remaining girls in the house are beginning to feel like Courtney lives to complain and they have tried speaking to her about it. But she wasn’t receptive.

Courtney believes that the other girls are mere b*tches and that she’s the sane one. However, she fails to see that she sometimes complains a little too often on set or that she can speak down to some of her fellow models. So one person had finally had enough of putting with what she believes was Courtney’s rude and offensive behavior yet Cory Anne probably would have had better luck talking to Courtney if her obvious disdain for the other woman hadn’t come out. Cory Anne for example had approached Courtney by telling her all the things she does that upsets everyone else in the house.

Yet, Courtney didn’t want to hear any of that because she was more willing to believe that Cory Anne along with a few others were ganging up on her. So the next few days at the house were awkward and the one thing that broke it up had been their Rita Alert. The message had said that they were all going to be working with Philipp Plein again though some of the girls had remembered that they hadn’t made a worthwhile impression on him the last time because he had thought that they were horrible. And so there were a few that allowed those nerves to control them as they went to meet Plein which could never been a good thing.

Philipp Plein remained the same strict task master and this time around he had wanted the girls to impress him during a live fashion installation. Though the girls had to come up with their own storylines and be photo-shoot ready during the entire show. So the girls did struggle. There had been Binta whose storyline with Paige was supposed to be sexual frustration/ attraction, but Binta’s nerves overcame her and her storyline came across as tacky when one of the girls looks like a deer in the headlights. Marissa and Cody on the other hand had completed lived their storyline as rivals.

Marissa and Cody had started out struggling over a purse and had even yelled at each other during the installation. But what kept them interesting and ensured that they eventually won the challenge had been the fact that they kept moving and posing. The girls had never once forgotten their story and they had been lively. So the people viewing the show had been entertained as well as wowed and Philipp for one had stayed in their room the longest. But Cortney had hated the fact that Marissa and Cody had won the challenge.

Courtney had thought their behavior during the installation had been unprofessional. However, the designer and special guest star on tonight’s episode hadn’t thought the same. Jason Derulo had been impressed by what he saw and he had taken note of those that had underwhelming. So after Marissa and Cody were done getting their personal shopping on at Plein’s store, the girls found out about their next photo-shoot. The girls were apparently going to be doing a photo-shoot with Jason Derulo and they were going to be selling a handbag yet Jason had warned everyone when he saw them again.

Jason had said that he was hoping some of them would redeem themselves for the photo-shoot. Yet, his hopes were squandered on some. Cory Anne had floundered on set and she couldn’t seem to find her right footing though the same could be said about Courtney. Courtney had struggled on set as well and she hadn’t thought that she had gotten a good picture. So the girls that seemingly hated each other had found out that they might be in the bottom two together. And funnily enough, they were able to move pass the animosity because Courtney had told her what it had been like for her growing up and why she was the was.

So that had allowed Cory Anne to understand where Courtney was coming from when she acted like a nervous wreck and just wanted things to finally be right. Though the girls eventually found out at paneling that there was another contender for the bottom two because Binta hadn’t done so well. Binta had messed up on during the installation and those same nerves came up again at the photo-shoot, but after last week, the judges weren’t going to be as tolerant as they have in the past because Binta had been warned about the fact she gives. And so there was a toss-up for who would be in the bottom two.

But in the end it had been between Binta and Courtney. Courtney had tried to explain away her bad photo as allergies creating a problem for her however the judges had finally had enough of “that” as well. So what decided the competition had been the face that both parties had given to the camera and Courtney was just lucky that camera loved her face more than anything.

And so Binta was eliminated on tonight’s episode and hopefully she will learn to overcome her nerves one day.