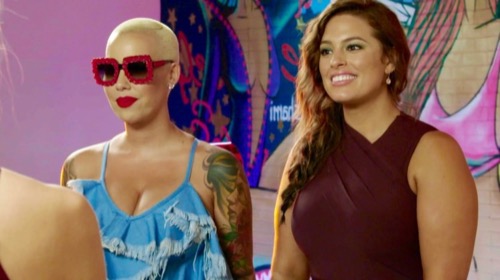 Tonight on VH1 America’s Next Top Model (ANTM) airs with an all-new time.  ANTM airs with an all new Monday, February 8, 2017, cycle 23 episode 10 called, “Platform Power” and we have your weekly American’s Next Top Model recap below.  On tonight’s ANTM episode as per the VH1 synopsis, “This week the models are split up into two teams to write and shoot an empowering PSA for Slutwalk. Find out which team impresses Amber.”

America’s Next Top Model (ANTM) begins tonight with the models celebrating India’s best video from last week. Tash is in shock that she is back in the competition and although Cody is happy to see her twin sister, but she felt she had more confidence when she wasn’t in her sister’s shadow. She feels having her sister back could be a disadvantage.

Paige announces there is a RitAlert; the girls gather in the living room. Rita Ora tells them “a boss has a responsibility to make their voice heard. Do with conviction!” Paige thinks it means they will have to do public speaking to a big crowd.

The next morning, the models meet with Ashley Graham who talks to them about being socially responsible how to use their power platform to give a voice to important causes. She is going to split them up into two groups. India, Paige, Cody and Tash are group 1 and Tatiana, CoryAnne and Courtney are group 2.

Each group is to make a 15-20 second public service announcement for the organization Amber Rose created called SlutWalk. The organization was started to empower women to have control over their own sexuality. Ashley surprises the models when she presents Amber Rose to them.

Amber tells them SlutWalk is about double standards, slut shaming, victim blaming, sexual assault and rape. Society has taught to always please a man and a man is always superior and everything women do is for men; but she wants them to know that is not true. Everything we do should be for ourselves and all they really want is equality.

She wants the public announcements to show the pain and the struggle but to also make make it very beautiful. Ashley gives them a pamphlet with information for SlutWalk and gives them they have one hour to do it.

Tatiana and Courtney are not working well together; Tatiana says she better not lose because of Courtney while the 4 in group one are working very well, bouncing ideas off each other. Group one continue to argue and its clear when they do their video, they are not organized at all. Group two is really put together, but they look too happy for the message. Amber says they are trying but are not getting the message.

Amber and Ashley watch the final videos, then bring in the models for critiques. Group 1 were very confident walking in and knew exactly what they needed to do but it was lacking understanding of what SlutWalk really stands for. Group 2 had the perfect wording, did their research and knew everything about SlutWalk but they lacked confidence.

They choose a winner and Group 2 won because they knew what they were talking about. Amber tells them their PSA (Public Service Announcement) will be played at the SlutWalk.

Back at the house, Paige is bummed and shocked they didn’t win the PSA challenge. Tomorrow they will have another photo shoot and the competition is stiff right now.

In the morning, the models arrive at Parlay Studios and Stacey Mckenzie is there to greet them. The models are going to be embodying some of the most iconic, boss ladies in pop culture history. They are told this is not impersonations but inspirations and to bring themselves into it by using everything they have learned thusfar in the competition.

Paige is going to be Britney Spears. Cody will be Grace Jones. Courtney will be Madonna. India will be Katy Perry. Tash will be Tina Turner. CoryAnne will be Beyonce and Tatiana will be Tyra Banks.

Drew Elliott arrives, reminding them that he warned them last week that they are at the point in the competition where the rubber meets the road, and they need to ZOOM in their own direction to win this competition. Drew introduces Vijat Mohindra as the phototgrapher for the photo shoot.

Drew is not happy with too many of the models. Tash did a fantastic job but Paige begins dancing and Drew tells her this isn’t a Vegas impersonation photo. Drew is annoyed that she isn’t using the women empowerment challenge in her photos. Courtney wouldn’t listen to any direction. Cody had a nice picture, but she was too robotic.

Drew tells CoryAnne her legs are like limp noodles. India does a great job and kills it. Tatiana is told over and over to not lean back, and she has no emotions in them. Drew feels this shoot was weak for her.

Tatiana is attacking Courtney after she had a bad shoot. Courtney ate her ice cream and offers to buy her more, but Tatiana says that isn’t the point. She bought that ice cream with her own money and no one should have touched that. Courtney calls her a bitch.

The models arrive at panel, where Rita says this week was about being social responsible, using their voice for a cause and learning what its like to be a real boss. The judges are Ashley Graham, Stacey Mckenzie, Drew Elliott and of course, Rita Ora herself. (Law Roach is away styling Celine Dion, and wasn’t present tonight). The judges chat and the models who won best photo are Tash and India who tie for it. Cody, Courtney, and Tatiana are safe. Paige and CoryAnne are in the bottom two.

Rita tells Paige her energy is contagious and she lights up a room when she commands it. She has proven herself as one of the best when it comes to moving video, but the judges think her photos are one note.

Rita tells CoryAnne that week after week she delivers strong beautiful photos but lately she doesn’t seem to be progressing and not bringing the energy to set that a boss needs. The judges think they may have already seen the best of her.

CoryAnne has made it one more week, and joins the other girls. Paige begins to cry and Rita tells her this isn’t the end for her, she has brought so much light to the competition; her personality just radiates. They hug and Paige leaves shocked because she had never been in the bottom two. She shares that she has no regrets and she is very thankful to have been there, done this and to have the chance to meet the girls she has met.

Rita tells the remaining girls that they are the final six, and now the competition goes to a whole other level and they all need to step up their game.