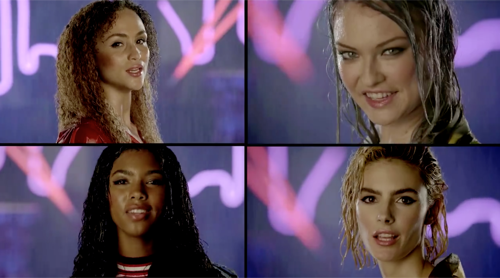 Tonight on VH1 America’s Next Top Model (ANTM) airs with an all-new time.  ANTM airs with an all new Monday, February 22, 2017, cycle 23 episode 13 called, “Brand Like A Boss” and we have your weekly American’s Next Top Model recap below.  On tonight’s ANTM episode as per the VH1 synopsis, “The final four learn what it takes to be a brand ambassador for Rimmel. The models are tasked with shooting a commercial featuring Rimmel’s new line of waterproof makeup, during which they must race through the streets of London.”

America’s Next Top Model (ANTM) begins tonight with the girls talking about the hard acting challenge they had last week. The four remaining models are Tatiana, India, CoryAnne and Courtney.

CoryAnne calls her mother and brings up how she feels about all the problems her mother when she was a super model. CoryAnne apologizes that she didn’t know; her mom tells her she is her dream child, they exchange “I love yous” and she feels better.

A RitAlert comes in saying, “Hi ladies, I can’t believe there is four of you left, don’t get too comfortable. The winner of America’s Next Top Model will represent Rimmel London, so get upstairs and study up.” When they go upstairs they are given apps and a booklet on how to play with the app.

The following morning, the models arrive at a Rimmel London studio. Rita Ora is there excited to show off the brand she is one of the faces for. She introduces them to her makeup artist Kathy Jeung. Today, their challenge is to act like Rimmel London brand ambassador.

Rita tells them as a brand ambassador they are expected to know and learn about the product; the product names and how to apply them. The Rimmel look is all about style, personality and attitude, to see if they have what it takes to showcase the Rimmel look, they will be doing each others makeup and then posing for a beauty shot.

Kathy Jeung tells them they will be judged on how well they know the brand, the beauty products and the attitude. They are being split into pairs, and given 15 minutes to get started.

Courtney is to give Tatiana the classic sophisticated look, and Tatiana is to give Courtney the bold/punk look. CoryAnne is to give India the edgy, cool, street-style look and India is going to give CoryAnne the elegant, glamorous look.

India is up first with her presentation. She is super nervous but Rita says they don’t expect them to be makeup artists, its about personality and attitude. India is failing miserably, having barely any knowledge on the product. CoryAnne begins applying makeup on India’s face, and Rita and Kathy feel she is very engaging and brought a great sense of humor, and had some great knowledge of the makeup.

Tatiana is now applying makeup on Courtney. Kathy was impressed with her applying the makeup; feeling she did great. Rita said she knew the product was very corporative; not as lifting and fun as she could be. Courtney is up last in the challenge. Courtney is doing well until she is asked about the lipliner, where she can’t say if it will stay on long and recommends using a straw.

They all get their beauty shots; Rita and Kathy give their critics but the model who best represents Rimmel London is CoryAnne. As the winner, she receives an entire Rimmel makeup kit plus a special surprise she will find out about later; but she needs to choose a friend. She chooses India.

As soon as they begin to settle, they receive a RitAlert. “Hey CoryAnne congratulations on winning the challenge. The surprise is at the door for her and India courtesy of Rimmel London. GO!” It’s their moms!!!

CoryAnne is happy to see her mom because she is worried about her, but after the rough and emotional last week, it was good for them to be together. India is thrilled to show her mom around and let her see the best video she had won last week.

In the morning, the models arrive at Cinema World where they are met by Drew Elliott. They are shooting the Rimmel London commercial today, and whom ever wins the competition their commercial will be the one they air.

Rita comes to visit them with her sister, Elena Ora. She tells them it has to looked relaxed and make it feel like they just caught them in the moment of saying it. “GET THE LONDON LOOK! Rita reminds them this is a big day, this is the day they could get their commercial.

Tatiana has fun in the rain, and after a few mishaps, she didn’t look too bad. Courtney of course complains that she has resting bitch face, and she always looks mad, she struggles once again with her eyebrows ad always looking angry. India rocked it again, she looked youthful and fun. CoryAnne doesn’t listen to Drew at all, and feels she didn’t do good enough in the challenge.

At the house, Courtney talks to Tatiana about believing Tatiana and CoryAnne hate her. Tatiana admits that they fight but she is cool, and advises her to be accepting of what people tell her, instead of getting defensive.

At panel, the judges are Ashley Graham, Law Roach, Drew Elliott and Rita Ora. Rita says she loved the commercial, she looked approachable and friendly and fun. Law says he is still unsure about her face; like does she have the face that can sell cosmetics; Drew agrees. Ashley says it doesn’t matter if she is called commercial here, she can learn editorial later; Law openly disagrees, saying if you don’t have the face you just don’t have the face.

CoryAnne’s commercial Rita loves, saying she stepped it up the notch but she did better in the makeup room than on camera. Law everything was great but the tagline wasn’t good. Ashley loved it all.

India was told by Rita that this commercial reminded her of her first commercial with Rimmel and how it made her feel free, which is perfect for India. A+ Ashley says she has the face for cosmetic companies. Law says her face is everything and she will be able to sell a lot of things. He believes in her.

Courtney is up last, Rita says she loves her but the commercial was very flat for her. She tells Courtney not to cry because she knows how had she tries. Law feels he bought the boots, and the last shot was good but the rest wasn’t the best. Ashley tells her this was good and she got it. She tells Courtney to remember that she thought she was amazing.

The judges deliberate as the models stress backstage. Courtney is crying and they do a group hug, telling her no matter what happens, they are all good.

The girl who did the best job for the Rimmel commercial is India, making her the first of the top 3. Tatiana is also in the top 3. CoryAnne and Courtney are in the bottom tow.

“Courtney, at the beginning of this competition you stood out. You took beautiful photos, but its more than just beauty in this competition. We know you can book any editorial campaign, but we wonder if you’re the versatile model we are looking for.”
~ Rita Ora

“CoryAnne, although the commercial you delivered today was impressive; the fact that you struggled to deliver the tagline concerns us. You seem like a new person today and you’ve broken out of your shell; but is it too little too late?”
~Rita Ora

CoryAnne is the last one in the top 3 and around for one more week. Rita tells Courtney she is an amazing model and will look back on her photographs and be very proud.