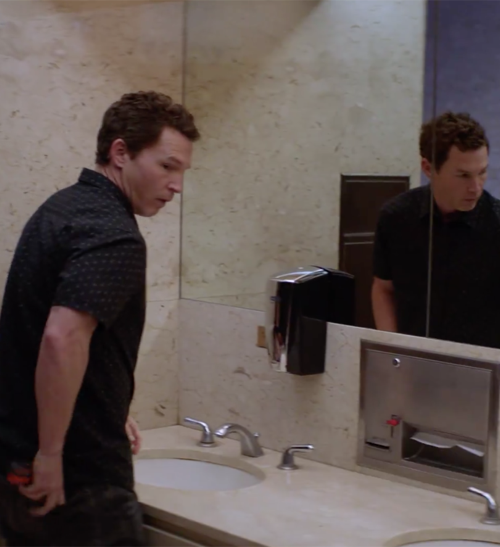 Tonight on TNT Animal Kingdom premieres with an all new back to back Tuesday, June 27 season 2  episode 5 Animal Kingdom recap called, “Forgive Us Our Trespasses.” On tonight’s Animal Kingdom season 2 episode 5 as per the TNT synopsis, “The guys spin into motion a megachurch heist, yet Craig has second thoughts. Meanwhile, Javi pays Smurf a surprise visit.”

Tonight’s episode of Animal Kingdom looks like it is going to be great and you won’t want to miss it, so be sure to tune in for our live Animal Kingdom recap at 9:00 PM ET! While you wait for our recap hit the comments and let us know how excited you are about the season 2 episode 5 of Animal Kingdom.

Smurf is mentoring J. She’s teaching him how to manage the money side of things and how to remain cool under pressure however she was also teaching him how to handle a firearm. Smurf had taken J out to a training field and had do exercises that were normally saved for people in law enforcement. But Smurf wasn’t just teaching J these things. She was guiding him towards a much larger goal and part of that had been why she was now turning him into a potential heir that would replace the others.

However, Smurf hadn’t stopped with buying a couple of lessons. She had also packed up Deran’s room and had given it to J. She said that J needed a bigger place and that way he had access to the bathroom right off the room yet Smurf decided to right off the fact that Nicky was now sharing a communal bathroom with J. J had been getting ready for their church heist when Nicky walked in on him while he was luckily dressed. So the encounter could have been awkward J refused to let it go there and had even made Nicky believe he was dressed up to go out on a date.

So, right away, Nicky saw through that. She figured that J didn’t want to tell her the truth and that it must be because he was going on another job. The church job in fact, but what Nicky didn’t understand was why Craig wasn’t with his brothers and was actually getting high with her at Smurf’s. Smurf had unfortunately gotten kidnapped as she was dropping off Deran’s stuff and so she found herself being brought to a field by Javi of people. Yet, Javi hadn’t kept Smurf wondering for long because he had come out and directly accused Smurf of killing father. He said he found out the truth and that he wanted three hundred grand by tomorrow or he’ll hand over the tapes.

The same tapes that her former partner, Manny, had made while he was suffering from Alzheimer’s and needed help remembering people. Meaning those tapes could have something incriminating on them and that they could send Smurf to jail if they were to ever get out. But Smurf had had an idea that Javi would be coming after her. What with him confronting her at Manny’s funeral and accusing her of turning her back on him. So, of course, Smurf prepared herself. She’s been sleeping with a gun next to her bed and has more or less been careful. And so Smurf was ready to pay Javi if he would go away.

She had initially wanted to pay him eight grand a month, but was willing to settle on one lump sum if necessary. Though Javi hadn’t wanted to offer Smurf a ride back to civilization and had forced her to hitchhike her way back. So for most of the day, Smurf was out of the picture and she hadn’t known what was going on with the heist or that her boys eventually got themselves into some trouble. The guys it seems had underestimated the church as well as its security because they thought that they could steal a safe in under an hour and that no one would find out until the next day – only they were nearly caught because of that same arrogance.

Baz had thought that air duct would be find except it cut open J’s leg pretty bad and he bled all over the place. Then, there was also Craig who should up at the scene all hopped up and who suddenly wanted back in on the job after Nicky had pointed out to him that if the plan works without him that his brothers might realize they don’t need him. However, Pope had been forced into a very uncomfortable conversation with his girlfriend Amy. As in the woman that run Bible Study at the church and who would remember how shifty Pope was acting. So everyone had left themselves open and vulnerable on this one job.

But J’s leg wound was pretty bad and Baz has been forced into stapling it in order to stop the bleeding. So J received his first scar on what was supposed to be an easy job and he had a beer with his uncles afterwards because he hadn’t wanted them to see how much pain he was in yet not everyone was there for that drink. Pope hadn’t been able to make it because he had decided to stay over at Amy that night and Craig didn’t make it because he was too busy driving his motorcycle while under the influences. And so Craig had gotten into an accident. He had crashed his bike on the beach and had later been found by the cops passed out.

So this latest job had come at a cost! Yet, the only one that didn’t know it was Smurf and she had warned J to keep his gun close the second she got home!