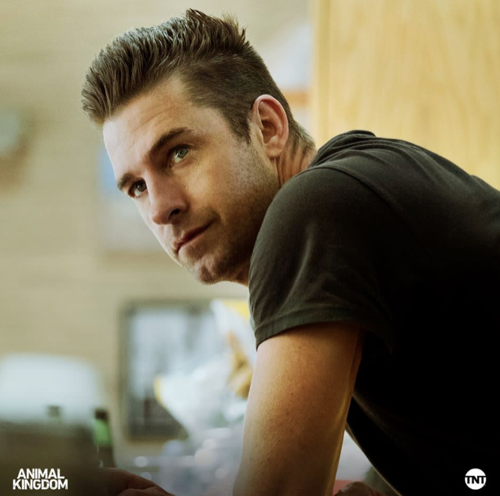 Tonight on TNT Animal Kingdom premieres with an all new back to back Tuesday, July 25 season 2  episode 8 Animal Kingdom recap called, “Dig” On tonight’s Animal Kingdom season 2 episode 7 as per the TNT synopsis, “Cops press Amy about the church robbery as Pope attempts to divert their suspicions. Meanwhile, Craig plots an unusual heist of his own, and Baz tails Smurf in an effort to discover what she’s hiding.

Tonight’s episode of Animal Kingdom looks like it is going to be great and you won’t want to miss it, so be sure to tune in for our live Animal Kingdom recap at 9:00 PM ET! While you wait for our recap hit the comments and let us know how excited you are about the season 2 episode 8 of Animal Kingdom.

J let the secret slip. He told Nicky that they didn’t have to worry about Javi coming back because it’s been handled however he told her not to let the others know that he told. But the relationship between J and Nicky was changing again. They had had a moment before everything had gone done and just recently they had started making out again. So the one thing that seems to be in between them is Craig. Craig and Nicky were still together and so Nicky didn’t feel comfortable with having Craig in her bed and kissing J in the bathroom.

However, J didn’t appear to care about a lot of things that he should. He was now fine with missing the occasional day at school and he was also carrying around his gun like that wasn’t a problem. So Smurf had decided that she should at least help him and she had promised to teach him how to start making his own ammo though she only agreed to do that after school. School was still and Smurf didn’t want J to become like her other sons. She wanted him to think for himself and become someone more like her.

Smurf has stayed out of prison because she knew how to get others to do her dirty work and so she told J that if he could do the same that he would have real power rather than what a gun could give him. Yet, there were a few things that Smurf wanted to know in exchange for the life lesson. She asked J about his uncles and how angry they were. So he told her that the best way he could describe it would be like what happened between him and his mom. J said that he would often get into it with his mother and that one day he had packed up his stuff, but then her ex stopped by.

The ex was off his head on drugs and he would have killed Julia if given the chance. But instead J and Julia beat up her ex-boyfriend and got the ex-husband to leave. So Smurf had asked J if he unpacked afterwards and J said that he hadn’t. He told his grandmother that he didn’t unpack and technically forgive his mom until she had apologized for how she treated him. And so Smurf’s own children couldn’t forgive her until she acknowledged why they were so angry with her and properly apologized.

Though Smurf knew the only way that she could truly apologize was to pay the guys their money. She had owed them two hundred thousand from the church job they pulled off and she had also still owed them money for defending her. So she went to one of her hide-outs and she grabbed some money from storage however Baz had been following her because he thought that she had more money than she was letting on so he found out about her hideout and he had also asked around. He found out that Smurf had the storage locker since ‘04 and her alias.

So that made Baz believe that Smurf could have been hiding her money this entire time by taking more than her fair share. Yet, Smurf’s sticky fingers weren’t his only concern. He had also found out that a police officer named Patrick Fisher had been around talking to Lena and so he had talked to his daughter about that, but she told him all about “Uncle” Patrick. She said that he was Catherine’s friend and that he bought her things so Baz later went to his private detective looking for answers.

Baz had wanted to know how Patrick knew Catherine and he had initially been skeptical when he found out that Catherine was an informant. He said that Catherine hated cops for putting her into foster care and that she would never work with them though Baz’s friend had been sure about what he found. He told Baz that Patrick had an official file for Catherine and that he was also looking into her disappearance. So Baz realized that Catherine had betrayed him and it made him then question what exactly happened to her.

Baz knew that someone like Smurf could kill Catherine if he ever found out that she was snitching on all of them and so he talked to Pope. He told Pope that Smurf had been stealing from their jobs for years now and he also told him that he suspected Smurf killed Catherine. He told Pope that the police thought Catherine would turn informant and that he knew for a fact that she wouldn’t though all it would take was for Smurf to believe that Catherine would talk. So that changed how things went with Smurf when she did apologize.

She had brought the family together and she had paid twenty thousand dollars each for helping her in her time of need because she said cash was better than a mere apology. However, Smurf had wanted something as well. She had asked that they launder their money through her business so she could continue to make it look legitimate and she said that was all that she wanted. Smurf told them that she knew they were all adults now and that they could do things on their own. So she was going to start treating them as adults and the only ones that truly saw through that had been J, Baz, and Pope.

Pope had been forced to pin the church robbery on another ex-con at the church and he had warned Smurf once before that he wouldn’t let Baz take the fall for what happened to Catherine. So Pope was leaving himself prepared for what might happened next…