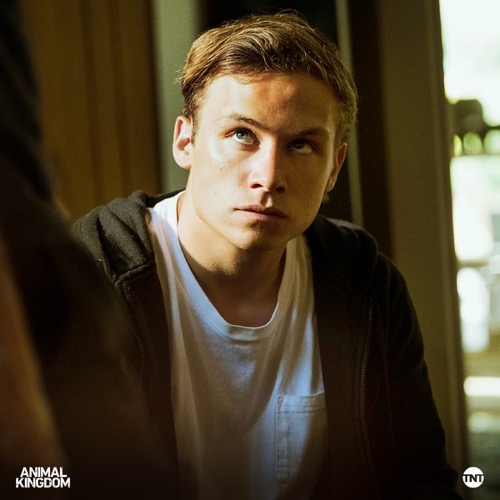 Tonight on TNT Animal Kingdom premieres with an all new back to back Tuesday, August 22 season 2  episode 12 Animal Kingdom recap called, “You Will Be Gutted.” On tonight’s Animal Kingdom season 2 episode 12 as per the TNT synopsis, “With Smurf in jail, Baz makes his move to run the family, but his brothers have other plans.”

Tonight’s episode of Animal Kingdom looks like it is going to be great and you won’t want to miss it, so be sure to tune in for our live Animal Kingdom recap at 9:00 PM ET! While you wait for our recap hit the comments and let us know how excited you are about the season 2 episode 12 of Animal Kingdom.

Baz made his move. He made an anonymous phone call that got Smurf arrested and he then took over her house just to prove to himself that he was now in charge. But Baz had made one crucial mistake. He hadn’t told Pope about what he was going to do and had thought that he could feed Pope the same line he was feeding everyone else. Which was that Smurf wouldn’t have a problem with the party and that didn’t need to be concern because Smurf wasn’t going to get back at them for anything that might happen.

However, Pope wasn’t like his brothers. He was bound to question Baz’s story and Baz had even been warned about that by Lucy. Lucy told Baz that he should get to Pope before Pope could be turned against him. So Baz said that he would go looking for Pope and talk him into seeing his side yet Pope ended up walking in on the party before that could happen and he hadn’t been happy. He had gotten a call from Lena who was scared and injured because a car almost ran her over what with no one watching her.

So Pope had been ticked off and he had wanted to know where her father was as well as Smurf’s location. He knew that Smurf wouldn’t have left Lena to fend for herself at such a party and so he knew something was off before Baz could even return and explain everything to him. Yet, Baz was also forced to explain why he had made a move against Smurf and so he finally filled in the others on his grand plan. Baz said told him that he called the police on Smurf because he found out she killed Catherine.

He said that Smurf thought Catherine was an informant and killed her though he also said that she had been wrong because there was no way that Catherine would have gone to the police. So Baz mentioned that Catherine was just one of many of Smurf’s crimes. She had also killed Javi and it turns out that she had been stealing from there for years. But Baz told them how he had made sure that Smurf wouldn’t get out of jail. He said that he had shot Javi with one of Smurf’s guns and had then called in a tip. And so Baz didn’t think Smurf was ever going to get out.

Not only did Baz do all of those things, but he also cleaned up after himself. He erased footage from the surveillance system in the house and so there was no proof linking him to frame-up job. Though J who had later gotten a call from his grandmother, had promised her that he was going to look for evidence and thankfully he was smart enough to hide what he was doing from Baz. Baz thought he could use his power of attorney to sell off Smurf’s businesses and had promised the others that he would split the proceeds evenly amongst everyone. Except Baz no longer had the authority to do any of that.

Smurf had given power of attorney to J because she knew that she couldn’t trust Baz and so Baz didn’t find out that he lost everything until after the fact. However, J had fortunately gotten out of dodge. He went to visit Smurf in prison because she had asked to see him and he told her the bad news. That Baz had erased footage that could have gotten her out and that Baz wanted to sell off everything. So J asked his grandmother what should he do. He had power of attorney though he knew that Baz would try to push him into signing everything over to him. And so Smurf told him not to worry.

She told J that all he needed to do was stall until she could get out. But J had visited her lawyer and he had asked some unusual questions. Like if he could spend the money without asking Smurf for permission first? So he found out that he could however, the lawyer had advised him against doing that because Smurf wasn’t someone he should overlook. Even if she was in prison. Therefore, J took all the documents he needed and he had gone back to the house knowing he would be confronted by Baz just not knowing that he would first have to talk to Lucy. Lucy could be quite manipulative and she thought that she could play J by using J’s mother.

Lucy mentioned how much Baz allegedly loved J’s mother and how Baz wished Smurf hadn’t forced them apart. Yet, J knew the truth. He knew that Baz never cared about him or his mother. So Lucy wasted her time trying to manipulate him because he was the one with all the cards and he knew that from the start. J had access to all of the businesses the others use to launder their money and so he wasn’t going to sign over anything to Baz just to get a father. If anything that would sure up his resolve and ensure he never helped Baz with another thing ever again. And so J did his best to play everything safe though he was the only one doing that.

Deran and Craig had gone to see Smurf in prison and she had gotten into their heads. She told them that Baz was lying about the amount of money that was in her lockers and that they couldn’t believe a word he said because he was the one that threw his poor mother into prison. Though what had truly gotten through to the boys that they shouldn’t align themselves with Baz was the fact that Smurf signed over power of attorney to J. She said that they hadn’t been cordial towards her lately and that J had been the next best option. So both Deran and Craig decided to simply get out while they could.

They had demanded their cut from Baz right away and they were each going to use their cut to go legitimate. But as Craig was trying to decide what to do with his life, Pope chose to tie up some loose ends. He had robbed a couple of banks and had gotten enough money to put in Lena’s trust fund to set her up for life. So Pope was getting his affairs in order because he was considering suicide. He had been trying to kill himself earlier when Lena got in touch with him and so he wanted to make sure she was set before he planned anything else.