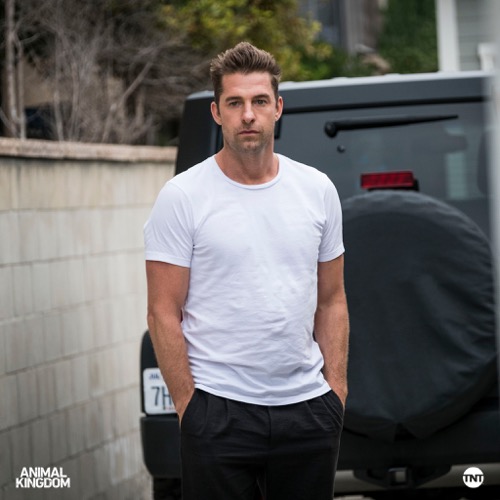 Tonight on TNT Animal Kingdom premieres with an all new back to back Tuesday, August 29 season 2  episode 13 Animal Kingdom recap called, “Betrayal.” On tonight’s Animal Kingdom season 2 episode 13 as per the TNT synopsis, “In the Season 2 finale, Smurf pits her sons against one another when she realizes she may be in jail a lot longer than expected.”

Tonight’s episode of Animal Kingdom looks like it is going to be great and you won’t want to miss it, so be sure to tune in for our live Animal Kingdom recap at 9:00 PM ET! While you wait for our recap hit the comments and let us know how excited you are about the season 2 episode 13 of Animal Kingdom.

Pope has been going off-script lately. He’s apparently been robbing banks far and wide by himself because he wanted enough money to put in Lena’s trust fund. However, one of the reasons why Pope was going out of his way to ensure that Lena would have a safety net was his guilty conscience. He felt guilty about killing her mother Catherine and leaving a defenseless child with Baz. Baz was a selfish parent and he barely remembered his daughter much less put her first. And so it wasn’t surprising Lena couldn’t tolerate him anymore.

Lena was young however she wasn’t dumb. She knew that it had been her grandmother Smurf that took care of her and that her Uncle Pope was someone she could also rely on. But her dad was a mess and he would often get so caught up in whatever he was doing that he never spared a thought of how she was doing. So Lena had gotten angry when she found out her beloved grandma was in prison and she rightfully blamed her father for what happened to Smurf. And to drive the point home, Lena told her dad that she wanted to stay with her Uncle Pope.

Though Baz thought she was just acting out and that she would eventually get over it time. So he was more focused on the businesses than he was on his own daughter and that’s was the rule reason he wasn’t leaving town anytime soon. Lucy had tried to tell him that they had enough to start over in Mexico and he didn’t need a cut from anything else, but Baz refused to leave. He said that Smurf owed him and so he had been hoping that he could manipulate J into signing over power of attorney to him.

Except J had gotten around to speaking to Smurf. J had made certain arrangements that guaranteed Smurf would be safe in prison and so she returned the favor. She made sure that her lawyer was unavailable for Baz whenever Baz wanted to see him and that had only angered him more. Baz knew right away something was off when the lawyer suddenly took off out of town and her assistant didn’t know when she would be back. Yet, Baz still didn’t want to give up on the money despite the lawyer going AWOL and so he called a family meeting.

Baz got all his brothers and J in one room and he made a case about how J didn’t deserve to have power of attorney. However, his family didn’t support him like he thought they would. Craig and Deran had wanted to know for instance why Baz didn’t tell them what he was going to do to Smurf before he did it. So that caused an issue because Baz had replied that he didn’t think either of them were strong enough to go through with it. He said that Craig snorted thousands of dollars up his nose whenever Smurf didn’t pay attention to him and that little Deran ran off to get her attention.

So both Craig and Deran had gotten upset by that and it had in fact been another reason to distrust Baz. The brothers have been talking and they weren’t sure they could trust Baz. Baz wasn’t technically their brother and if he could do that to Smurf then he could do that to any of them. But one of the biggest indicators to their new attitude towards Baz was that neither of them felt comfortable about attending the meeting with guns. They had been worried that something would kick off and something did.

J confronted Baz about his motives and Baz took a swing at him, but fortunately the others were able to separate them and Pope called an end to the meeting anyways. Pope had seen that Lena was nearby and he wanted to scare her so he carried her out of the room before anything else could happen. Though Baz quickly left the room afterwards as well because he thought Pope hadn’t had his back.

Pope was usually the one that calmed down the others and he didn’t do that this time around. So Baz called him out on that and he told him to fall in line though Pope had other concerns. Pope said that Lena wasn’t sleeping and that the little girl was scared that everyone would eventually leave seeing that’s what happened to both Catherine and Smurf. Yet, Baz hadn’t cared about that and he didn’t like Pope questioning him either. He said that Lena was his daughter and that it was none of Pope’s business what he did with her or what would happen in Mexico.

However, Baz went up to the prison to visit Smurf and she ended up telling him that it was Pope that pulled the trigger and killed Catherine. So Baz instantly wanted to kill Pope and he later went to go do so except he couldn’t go through with it. Pope had been warned beforehand that Baz found out the truth and he hadn’t run away. He had actually waited for Baz to go through with it because he wanted to die. Pope even admitted such to Baz when Baz caught him and that hadn’t been the only thing that Pope admitted.

Pope also said that no one in the family had ever thought about him. He said that he had loved Catherine and that Baz took her from him simply spite Smurf because Smurf hadn’t let him have Lucy. But then Pope broke down and Baz just couldn’t go through with it. He chose instead to forgive Pope for what he did and he told him that he loved him. Baz said that they were brothers and that he would always love him. And what truly go through to Pope had been the part when Baz said that it was still on Smurf.

Smurf had been the one that wanted Catherine dead and she had manipulated Pope into carrying it out for her. So Baz decided to just go. He told Lucy that they would be going down to Mexico and that they would start over, but then he had gotten into his car and somehow had shot him. It was pretty unclear about who did it only it could have been anyone. J was at his graduation party only he could have snuck away and shot Baz for telling him that he was the product of rape, or it could have been Craig who decided to leave town, or it could have been Deran freaking out over how Pope thought something was going to happen to him, and hell it could even have been Smurf who might have arranged things from prison.

So there was an entire group of people that could have killed Baz and funnily enough his girlfriend Lucy was at the top of the list because she quickly robbed him of everything right after the incident!