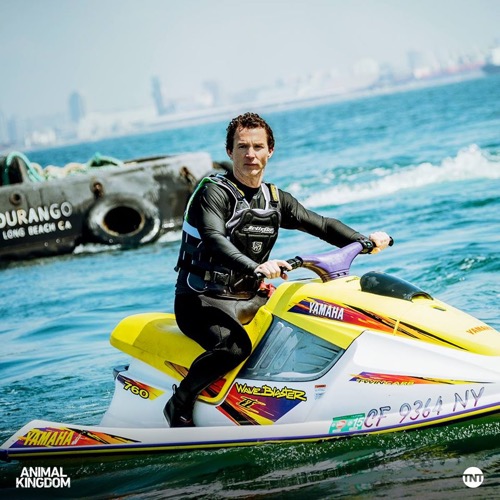 Tonight on TNT Animal Kingdom premieres with an all new back to back Tuesday, August 8 season 2  episode 10 Animal Kingdom recap called, “Treasure.” On tonight’s Animal Kingdom season 2 episode 10 as per the TNT synopsis, “Craig leads the guys and Nicky in pirating a yacht as Smurf investigates who robbed her. Meanwhile, Baz contemplates what life would be like without Smurf calling the shots.”

Craig was determined. He had thrown everything he had into this boat job and was counting on everyone supporting him however Pope had talked to Deran about his doubts. He said that they shouldn’t have brought in new people because family knows they could depend on family and he also that Nicky shouldn’t even know about the plan. Pope said it was too risky with so many people knowing about their business and that maybe they should pull out. But Deran disagreed. He said that Craig has always been there for them and that he needed them now to be there for him. So Deran was going to go through the boat job no matter what.

However, Baz had already pulled out of the job and Pope didn’t trust the crew they were going to work with or Craig’s plan for that matter. So the one person that hadn’t voiced an opinion had been J. J had found Smurf in his room and she wanted to know if he talked to anyone about her storage locker because she had recently been robbed yet J said that he didn’t tell anyone about her many storage lockers out there and that he had no idea who robbed her except that had been a lie. He did know who robbed her because Baz had talked him into a side job that he hadn’t thought was harmless and it turned out they were stealing from Smurf.

So J had later confronted Baz because he believed he should have known who they were stealing from before Baz had roped him in. Yet, Baz said that he hadn’t known for sure if he could trust J and that he was going to find out the answer to that pretty soon. So Baz still thought that there was a chance that J would tell Smurf everything, but Baz had also mentioned that they hadn’t stolen a thing off of Smurf. Smurf had been skimming from their jobs for years and so that money was going to be spread equally among everyone. Which he said included J because Smurf had also stolen from him. And so J chose to remain silent about what he did.

He hadn’t wanted to stir up trouble and he wanted to focus on the boat job that Craig planned. Craig had everyone playing a part and so his part was stopping the boat. He had messed around with the engine right when he knew that they would be too far out for cell reception. But then he sent an emoji signal to Nicky and so she faked an emergency on a boat out to sea. So any help that was coming their way was diverted to Nicky’s location and that bought Craig’s family enough time to make their move though they weren’t the only ones with a plan. Baz had gone to steal Smurf’s gun and then planted it near Javi’s body after he shot the body just to prove Smurf killed the other man.

Baz however wasn’t just getting revenge. He had wanted to get rid of Smurf entirely and that’s part of the plan he left out when he started to bring J in on things. Though J was off at sea and was robbing a rich wedding. The guests had all brought gifts and money to pin to the bride. So the guys immediately moved to grab the bride in order to keep anyone else from trying to being a hero And they zip tied anyone that would be trouble. And so everything was going great until the new guy, Marco, snapped. He had come across an old woman that didn’t want to give up her ring so he cut her finger off just to get the one jewel and that had upset Pope.

Pope didn’t like people going off script and he thought that Marco was weak for letting a little old lady get to him. However, Craig had pulled Pope away from the other guy before things could devolve into a fight and he got everyone to focus on the money. The money was going to be split evenly and Smurf was going to be the one that “cleaned” it for them. So J’s job had been to take the bag to Smurf so that she could laundered it, but he decided to play it smart because he no longer trusted Smurf with his money so he made sure to take a picture of the haul and had even swiped a few pieces for himself.

J it seems had been keeping his money at an old friend’s home and so he took some of the stolen jewels there as well. But no one knows about it and that includes the old friend. She was someone that used to look out for him and his mother back in the day. So he occasionally stopped by with groceries as a way of taking care of her now and, after he had hung out with her, he then joined his uncles for a round of celebrations. Everyone was proud of Craig and all the work he put into the job and so Craig was feeling proud of himself. He did a little coke in the bathroom and hadn’t minded that Nicky was spending so much time with J. And so Craig decided to own up to his mistakes.

He had come across an ex-girlfriend earlier in the day and she was still a little raw because of the way that Craig had treated her. Yet, Craig went over to her place and he apologized for everything he did. Like stealing her stuff and leaving her for dead! So along with the apology he had also wanted to gift her some coke and she had told him that the coke wasn’t going to make her forget what he did to her. And so Craig invited her to Las Vegas. He said that they could have fun and that he can truly make it up to her there though Craig had sort of forgotten about Nicky because he had left Nicky at the bar and she had started vomiting all over the place after one too many.

Though that as it turns out was the least of anyone’s concerns. Pope had told his brothers that he was out because he was getting too old for that sort of stuff and Baz would later tell them that he was out as well. Baz had a private little fund for himself after stealing from Smurf and so he just wanted to retire in his new house with his new girlfriend. So Baz thought that he could handle whatever Smurf threw at him, but it’s not like she’s going to forget about the money or the betrayal anytime soon.