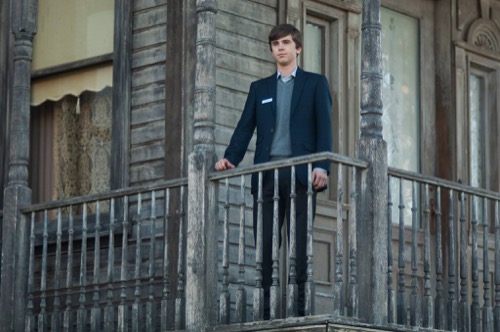 Bates Motel returns tonight with Norman (Freddie Highmore) waking up in his bed with his dog Juno jumping on him, he smells breakfast cooking and says, “Oh, mother.” He quickly dresses with his new manager badge on his suit jacket. His mother, Norma (Vera Farmiga) greets him and they share breakfast together.

Norman shares that he has replaced all the shower curtains in the motel and is planning to go to town to buy paint for the outside; Norma wishes she could go to town with him. Norman says he will see her in a bit, she sarcastically says of course he will; its not like she is going anywhere. As soon as he walks out the door, her image vanishes and the kitchen is a disaster filled with dirty pots and dishes.

Sheriff alex Romero (Nestor Carbonell) is serving time in prison, he has 2 photos on the wall, one of him as a child, with his mother; the other is of him and Norma. He works out really hard in the prison yard.

Norman arrives at the hardware store where a young woman, Mrs. Madeleine Loomis (Isabelle McNally) helps him with pain colors; but she looks very much like his mother. She shares how much she loves his house, and he says his mother found beauty in everything and would have loved the store; she says the store is more her baby than her husband, Sam (Austin Nichols).

He opens the wallet, realizing its Joe Blackwell’s wallet; he asks her to hold the items until he returns with money. Meanwhile, Romero attempts to make a call that cannot be connected at the time and it told to try later.

Norman returns home to his mother vacuuming the house, she looks at the wallet and tells him to put it in the lost and found. He says he doesn’t remember checking this person in. Norman asks her if she has ever felt like she has the same nightmare over and over again, but you can’t remember it; just the feeling. She tells him to put the wallet in the safe because his memory is so bad. He says he can’t help it.

Dylan (Max Thierot) and Emma (Olivia Cooke) are married and they are celebrating his big promotion and Emma’s birthday. Dylan comes into the kitchen and Emma hands over their infant daughter to Dylan and she answers the door; its Caleb, (Kenny Johnson) Dylan’s father.

She invites him in, Dylan introduces Caleb to his granddaughter. He admits he saw how happy they were on facebook and he had to come when the baby was born; he says that Norma Louise must be over the moon. Dylan says he doesn’t talk to Norman and his mom any more. Dylan refuses to talk about it; Caleb asks if h can stay for a while, she says he can sleep on the couch.

Back at the motel, Noram is going through the guest book and cannot find Blackwell’s name anywhere inside. He finds a gas receipt in the wallet to check if the date coincides with one of his black outs, and it does.

Romero gets a visitor, who apologizes for him being stuck in the system. Norman calls his credit card company to find out about a charge on his card, he learns he had purchased luminal the day of Blackwell’s receipt.

A guest comes int, asking to rent a room for a few hours, but Norman tells him they are not that kind of motel. He tells Norman is name is David Davidson, and hands him the money, saying he doesn’t need any more information. Norman hands him the key to room 1. When he retrieves the woman from his car, her face is hidden under the umbrella.

Norman looks through the peep hole, but still can’t see who it is. He has undone his pants as h watches them, but his mother calls him up to the house before dinner gets cold.

Norman comes in for dinner, asking if she had ordered luminal lately; when he asks what it is she says she is pretty sure it’s a cleaning product. He says he hates having blackouts but refuses to take his medicine. Norma say she likes the paint swatches he got, he says Madeleine chose them, she things Loomis is a funny name. Norman admits painting everything would be a big job and she could be very helpful.

Norma asks how old she is, and he says late 20s. He asks if she has a problem with that, and if it would be so awful if he had a friend. Norma confronts him on her being dead because he wanted her all to himself, to not be distracted with anything nor anyone.

Norma says she literally gave up her life to protect him, to give him a life without trouble and they are doing it: a mentally ill boy and a dead woman! She orders him to stop saying he appreciates it, and he apologizes how unfair it is to her. She says he can’t have anyone in his life, especially another woman because it makes her job of protecting him harder. She storms out of the dining room, saying she isn’t hungry.

Later that night, Norman crawls out of bed and goes to the basement; where he cuddles up to his mother’s body in her rocking chair. He asks what dream is he in?

Emma comes downstairs finding Dylan playing with the baby; he informs her that Caleb went to town to get some bagels and coffee. They both feel he wants to move to Seattle to be near them, but Dylan doesn’t know what to say but tells Emma that Caleb gave him a bunch of the money to pay for her transplant; so how could he turn him away?

Norman comes into the motel office and finds the safe open; he thinks his mother did it. Someone calls out and he comes to the front room to see Madeleine there with the paint; he offers to pay her, at first she refuses but he insists and walks her to her car.

She says the motel is cute and would love to see the house, but he says it is too messy. He looks up to see Norma in the window, but when Madeleine looks up, she sees nothing; she invites him to the small business meeting in town tonight. She tells him to think about it.

Emma catches Caleb grabbing a piece of cake, asking her if she ever has the munchies in the middle of the night. He asks her about being scared about the pregnancy, she admits she was but she felt strong and life had given her a second chance. She thanks Caleb for what he has done for her; he says it truly was his pleasure.

She tells him he has to leave, because him being there is going to force Dylan to tell a lie to his daughter, Kate. She admits she doesn’t know the circumstance of how he came to be, but Caleb is putting him in an impossible position. Caleb says he understands and she wishes it could be different; but he agrees and says she is right. He tells her to go back to bed and to not worry about anything. She thanks him and returns to bed.

At home, Norman grabs the keys informing his mother that he is going to a small business owners’ meeting. She tells him he can go, but cannot take the car; he asks why not since she doesn’t need it. She says due to his blackouts he shouldn’t be driving; he feels this is her way of stopping him from going to the meeting. He takes the keys and says he is going to drive.

As he puts the car in reverse, she is standing behind the car. He orders her back into the house immediately, saying she shouldn’t be out there, but she says he shouldn’t be driving, so if he isn’t going to live by the rules, neither is she.

He says he is just driving to a meeting, she tells him she knows everything about what he is doing, including what he googles. She says she knows him better than he knows himself and is just mad that he keeps doing stuff that makes more work for her. Norman defends himself saying he doesn’t need protection; no one is trying to hurt him.

Norma grabs him by his ear back up the stairs and into the house; she brings him to the basement, opens the freezer ordering him to look inside. She tells him to remember the night he was putting up the shower curtains, and the man who showed up.

He flashes back to Blackwell coming towards him with a gun, asking if he was Norman Bates? He wants to know why the man wanted to kill him and how did she get there so quickly and kill him; she says she doesn’t know.

He asks what is wrong with them and she screams that she doesn’t know. She cries that all she knows is the world is full of bad people and they cannot trust anyone from the outside. It is only her and him, they will die without each other.

Norman says he understands and they will be okay; he also says its not like they haven’t done this before, as they both stare at Blackwell’s frozen body. Together they wrap up Blackwell’s body into the trunk of the car, drive to the lake, and row to the middle of a lake. Norma comments on how beautiful nature is, reflecting off the water.

Norman asks what they are doing exactly, she says what everyone else is doing: trying to survive. She still says she doesn’t know why he was trying to kill Norman. She tells him the water is deep enough, but Blackwell’s cell phone rings. Norman picks it up and hears that an inmate is trying to contact him; Norman accepts the charges and learns Romero calling him.