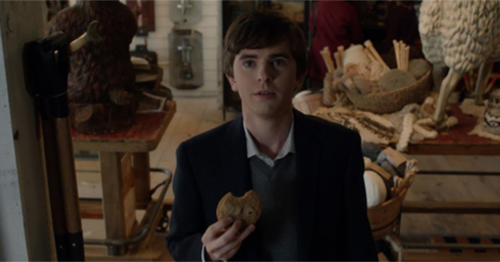 Bates Motel airs tonight on A&E with an all new Monday, February 27, season 5 episode 2 called “The Convergence of the Twain” and we have your weekly Bates Motel recap below. On tonight’s season 5 episode 2 as per the A&E synopsis, “Norman’s (Freddie Highmore) date goes awry; Romero’s (Nestor Carbonell) frustrations boil over and Chick gives Norman a gift.”

Bates Motel begins tonight with Norman Bates (Freddie Highmore) driving to see Sheriff Alex Romero (Nestor Carbonell) in prison. He greets him asking how life is and shares he is there because he was worried about him, and sent a friend to see how he was getting along. He assures him he is all right; Romero sits down.

Norman says he is sympathetic about his situation, and he knows what its like to live in a place locked up and being watched all the time; because Romero is the one who put him there; Norman denies his mother, Norma Louise (vera Farmiga) had anything to do with it. He tells Romero he is alive, Romero tells him he is alive for now; but warns him he is coming for him when he least expects it and to not get comfortable.

Norman returns home, but doesn’t go to the house. Dylan (Max Thierot) wakes up and informs his wife, Emma (Olivia Cooke) that his dad, Caleb (Kenny Johnson) moved on; Dylan is upset but says at least he left a note this time.

Emma confesses that she told Caleb everything they talked about. Dylan says he feels terrible and relieved at the same time. Emma says they are on a good path with no secrets, so they need to work to stay on it. She says their daughter, Kate will have less grandparents but at least she will be able to live in an honest world with them.

Caleb arrives at Bates motel, knocks on the door and rings the bell looking for his sister, Norma; when he gets no answer, he enters the house from the back door. He finds the kitchen in a terrible mess, and wanders up the stairs calling Norma. Norma’s room is messy but he finds Norman’s room in perfect shape; but strangely no one is there. Meanwhile. in the prison kitchen, Romero starts a fight and gets beaten pretty badly.

Norman goes to the coffee shop across the street from the hardware store and watches Madeleine Loomis (Isabelle McNally) as she fusses with the flowers in the front of her store. She comes over, saying she was sad he missed the meeting but she can tell him about the preserving the architectural history of the village, that they discussed at the meeting.

She suggests setting him up on a date; but he turns her down. She suggests her friend, Joanne who is cute and nice like him. He says if she is going, that changes things. Just then her husband, Sam Loomis (Austin Nichols) comes to get her for the store; Norman instantly recognizes him as the very rude motel guest, David Davidson. Norman agrees to the double date that night with the Loomis’.

In the prison infirmary, Romero says someone found out he was an ex-cop and jumped him. He suggests he needs to talk to his lawyer, the doctor says he should.

Norman returns home and enters the house, he hears his mother learning French off the computer. Norma asks where he was all day, he says the village. He tells her she went to see Romero, she says it was kind of dumb to tell Romero he knows he sent someone to kill him, rather than just let him believe he succeeded and live life quietly. Norman says they have to deal with it, and he went there to make sure he knows not to mess with Norman. Norma says she will deal with him when he gets out and Norman demands to know if she still has feelings for Romero.

Chick (Ryan Hurst) arrives at the door, he can hear Norman talking to someone. Chick says he is there to check on him, to see if he is having a bad time. He hands him a box of apples from his neighbor’s tree and admits he is there to show him something, he hands him a bag and says he has a proposition for him; they go down to the basement.

Chick says he will bring Norman the specimens/dead animals and he can turn them into art; Chick says he has quite a talent and he knows an art dealer in Portland who is into uncommon things; she even showcased some of his work. Norman is excited, but isn’t too happy when Chick says they should go 50/50. Chick subtly threatens him by asking how that freezer is working for him.

Caleb arrives at another hotel saying he is there to visit his sister; the clerk tells him that Norma passed away in a terrible tragedy. Caleb is shocked because he was just with Dylan who never said anything; the clerk tells him it made local news because she committed suicide.

Sam Loomis comes to the Bates Motel, wondering what kind of man Norman is. He says he is not going to explain himself to Norman but orders him to stay out of it. He says man-to-man, Sam clearly doesn’t care about Madeleine. He tells Norman if he tells Madeleine about the affair, he has no problem kicking his ass; and tells him not to screw with him.

Caleb goes to the cemetery, and breaks down at Norma Louise’s grave stone. As Norman prepares for his date, Norma is smoking and listening to old records. Norman asks if this has to do with their conversation about Romero; she denies still loving him. She changes the subject, asking him where he is going, he says a business meeting and he will be home in a few hours and spend time with her then. Norman starts the car and heads into the village.

Joanne seems to be speaking through the whole dinner. Madeleine praises about Joanne’s computer skills. Joanne says its because Madeleine is so artistic; Norman says he knows that simply from being in HER shop; Sam says it is THEIR shop and Norman says that’s hard to remember since he is never there. Sam’s excuse is his business is in Seattle.

Madeleine comments on his French accent; and Sam says he is more of a doer; Norman asks him what exactly is Sam doing? He says he does real estate and he is flipping some houses, but doesn’t get the market there in the village. Madeleine tells Sam it’s all going to be good, and Norman says his mother used to say that.

Joanne offers her condolences when she shares that his mother killed herself. Madeleine smiles and says she is glad he came out tonight. Norman runs into the bathroom, where his mother appears asking Norman when he started lying to her. He said it was easier to go to the dinner, than insult her. Norma says she is glad he is thinking about everyone else feelings.

Norman orders her out the window, tells her to take the keys and lay down in the back of the car, he will be done with dinner soon. Norma asks him if he still likes her; he says he does and she climbs out the bathroom window.

Romero’s lawyer arrives and says he should be able to get him on a work farm. Romero says that when he first got there he didn’t care whether he lived or died but now he realizes he needs to think of getting into a safer environment because he has to think of his dead wife’s son; the lawyer says he will file the papers and for Romero to not piss anyone else off.

The date comes to an end, Norman is in the car when his mother pops up asking why he hasn’t started the car; he tells her to lay back down before someone sees her. She looks at Madeleine and asks why he is having dinner with a 10-year younger version of her. He denies it and says it was just a friendly dinner. Norma opens the car door and says she is getting out. He tells her she can’t.

Norman comes to a bar, and in the mirror, his reflection is Norma; she shares with the bartender that she is a caretaker for a mentally ill person. She says the job is hard now because he doesn’t like her very much any more. She doesn’t want to do these things, she needs to get out more and see real people and suggests cutting her own hours; the bartender says he admires that kind of work.

Chick is also at a bar, but he is writing a story or journal of Norman, talking to his mother like she was alive; but she is dead, not much different than other relationships. His happiness is all just a creation of the mind.

Chick looks up to see Caleb walk into the bar and Chick sits beside him; Caleb tells him not to mess with him right now. Chick asks is that something you say to someone you beat the crap out of, left for dead and stole all their money and ruin their life. Caleb gets angry when Chick mentions that Dylan is both Caleb and Norma’s kid; Caleb tells him to not talk about Norma that way, or he will kill him.

Caleb says they don’t need to talk about the fact that he raped his sister. Caleb grabs him and tells him if he ever says her name again, he will kill him. Chick realizes that Caleb just found out about Norma and Caleb runs out of the bar. Caleb shares with Chick that Norman would one day kill Norma, and vows he won’t get away with it.

He runs into the basement, yelling for Norman, he opens the door and sees Norma’s body in the rocking chair.  Norman is wearing his mother’s dress and a blond wig, when he knocks out Caleb with the crowbar.  Chick sees it all and he tells him that now he knows Norma is still alive!