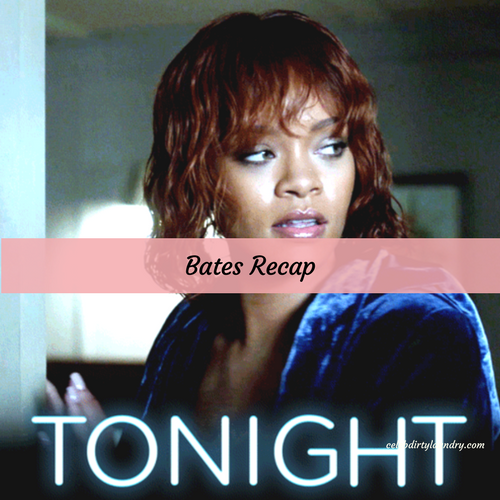 Bates Motel airs tonight on A&E with an all new Monday, March 27, season 5 episode 6 called “Marion” and we have your weekly Bates Motel recap below. On tonight’s season 5 episode 6 as per the A&E synopsis, “Norman (Freddie Highmore) checks in a special guest at the motel; Dylan grapples with devastating news; and Sam and Madeleine face a crossroads in their marriage.”

Bates Motel begins tonight with Marion Crane (Rihanna) arriving at the motel. Norman Bates (Freddie Highmore) comes down to the office, where she asks for a room, but only wants to pay by cash instead of giving her name and ID, but she does sign the registry book as Marion Samuels, saying she is coming from LA; meeting her boyfriend.

She texts Sam Loomis (Austin Nichols) as he gives her the key to room 1. She checks out the room, especially the shower in the bathroom. He introduces himself; she asks for something to eat he offers to make her a ham sandwich, she accepts.

Norman walks up the stairs in the heavy rain and sees his mother, Norma Louise (Vera Farmiga) watching him from one of the windows. He enters the house, when his mother questions where he has been. He defies her and ignores her questions.

He says he isn’t playing a game with her, and admits he is insane and can’t remember when he cleaned up. He says many people who are “mad” can fully function, including heads of state, so he could must definitely run a motel.

She says he is upset that she went out the other night and got laid, but he is to blame since he is always out with that Madeleine Loomis (Isabelle McNally) person. She says she is glad he found out, because maybe its time for no secrets between them. He says the only secret is that she doesn’t really exist, he made her up and tells her to get out of his way.

She asks if she doesn’t exist, why is she there; he says because the girl who has checked in the motel is attractive. He is beginning to understand it all. He leaves with the tray of food and tells her that she isn’t real and has no power over him and he is going to prove it.

Emma (Olivia Cooke) is at her home reading all the articles about Norma’s death, when her husband, Dylan (Max Thieriot) comes home. She wipes her tear away, but he notices something is wrong. She tells him she decided to look up the motel, and found an article about Norma, his mom, committed suicide two years ago; right after they left. Dylan reads the article and begins to cry while Emma attempts to comfort him.

Marion enjoys her sandwich as she says the room is so retro. He admits he is not a hunter, but a taxidermist. She says he has a big house up there, he says he doesn’t have a wife or family, but he has his mother. She scoffs about him living with his mother. He admits it has a lot of ups and downs but more downs than ups lately.

Marion says he is lucky to have a mother, since hers died when she was 5, and she ran away at 15 being a lone ever since. He asks how she ended up in LA, and she said there were a lot of chapters.

He gently strokes one of the birds on the table, telling her it is hard to be lonely but its also hard to love people and he thinks that the little private trap everyone lives in; once you care about someone, it rules you and who even knows if at the end of the day that person is really who you think they are or if they are real at all.

Her phone vibrates and it is Sam, who claims he is still busy with a client. She tells him it doesn’t matter, tells him to forget his client and come to room #1. He says he is sorry and cannot leave right now; Madeleine starts pounding on his door, screaming at him. When Marion asks him who that is, he hangs up; he comes out of the bathroom telling his wife he was just going to the bathroom.

Norman watches everything through the picture on the wall, including when Marion undresses to take a shower. He pulls away from the hole in the wall when he hears his mother say she is with him and to not forget, and this is why he needs her.

Meanwhile, Marion gets in the shower, grabs the bar of soap from the sink. She hears a door close, but ignores it. She comes back to the office and asks to see the desk registry, saying she wants to know if her boyfriend, Sam Loomis is on the registry from the last time they were there.

She wants his actual home address. Norman says that its not on the registry but he can give her the address because he knows Sam’s wife. Marion says he doesn’t have a wife, as she denies it, Norman says he doesn’t like the way Sam is treating either woman. He writes down the address for her, she points at him saying she knows he is wrong and leaves in her car.

Marion drives to the address Norman gave her, and witnesses Sam and Madeleine arguing in the house. She begins to cry, realizing she was wrong about him this whole time. She gets out of the car and grabs her crowbar, smashing the windows of his expensive car.

He comes out and turns off the alarm asking her what she is doing. She drives off and as he returns to the house, he tells his wife he can explain, she throws her wine in his face and locks him out.

Back at the Bates house, Norman’s brother, Dylan calls demanding to know what is going on and why he didn’t tell him about their mother’s death. Norman says he kept it from him because it was too painful, he shut down and couldn’t bring himself to tell him about her suicide. Dylan says that is bullshit and she would never do that.

Norman says she had a darkness in her, Dylan never knew about and she attempted to kill him along with her; confirmed by the authorities. Norman says it was a horrible tragedy, it never should have happened but it did, there is nothing more to say. He thanks him for calling and hangs up on Dylan.

Norma comes in the room and tells Norman to come and eat, he comes to the kitchen and she asks him to set the table, instead he opens the fridge and tells her he is making his own dinner. She says he is confused and she needs to take care of him. He says for the first time he is actually seeing clearly.

She pleads with him to look at her, she grabs his face but he closes his eyes, but he gives in before she can completely pry his eyes open. She wants to know why he is being mean to her.

He says he made her up, and he isn’t even sure Dylan just called him either; every time he says he made her up she throws all the dishes and food on the table. She finally gets him to admit she is real. She hugs him saying she is there to take care of him, not hurt him. He asks then why does he feel so horrible, mother?

Norman returns to the motel and sees Marion’s car. He can hear a lot of noise coming from her room, he knocks and comes in to see her. He learns that she went to his house and she feels like an idiot. She tells him not to be nice to her right now, she doesn’t want to cry.

She informs him she is checking out; but she can’t return home because of something she has done. She says at least he told her the truth, but it is just such a shock, it feels like the beautiful kind man she thought he was just died tonight.

She doesn’t know what to do because part of her doesn’t want to leave, hoping he will come to her explain it all; that he had left her. She begins to cry and leans on Norman’s shoulder for comfort. He says she doesn’t want to be that person, he saw the money and shoves her towards the door.

She says the prospect of that is scary. He says what is scarier is being caught in that trap. He gives her advise on her car and phone, so no one can trace her. She doesn’t even want her clothes, and he begs for her to go.

She hugs him and he tells her to get out of there while she can, and she does. While driving in the pouring rang she opens her window and throws out her cellphone.

In the office, Norman is gluing the lamp that Marion broke. Norma is upset that he left Marion get away because she was supposedly trying to get him to sleep with her, and he wanted her. He orders her to stop it, as car lights flash by the office, Norma says she is back.

Norman goes to the window and sees that Sam Loomis has arrived. Norma says he reminds her of Norman’s father, a self-centered ass. Norman says he is glad she got away. Sam goes into the room, calling out for Marion. He phones her and she doesn’t answer. He apologizes explaining the hell he has been living with this lie since he met her. He promises to be at the motel room waiting for her to come back.

Norma shares that his mother shielded him from all the pain she endured from his father. Norman learns that she always did this to keep him safe, she says the pain she kept from him, he now needs to feel it. She says if he really wants to know, then pain comes with the knowledge. She tells him they were partners and she reveals that he wanted to save her, but he was too small.

Norman wants to know who she is and what she went through, now he is going to feel it all. She says the only way to stop this feeling is to do what she always did and what he wants to do to the ass, Sam Loomis right now. She says Sam is a bad man like his father, hurting innocent women like his mother; using them like trash. She tells him he isn’t too little now.

Norman walks out of the office into room #1, while Sam is in the shower. Sam hears something and believes it is Marion. Norman opens the bathroom door, yanks the curtain open and repeatedly stabs Sam in the shower. Sam grabs the shower curtain, but falls halfway out the tub dead.

Norman says, “Oh Mother, what have I done?!”