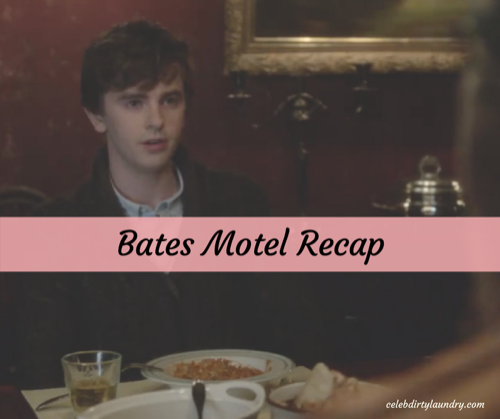 Bates Motel airs tonight on A&E with an all new Monday, March 6, season 5 episode 3 called “Bad Blood” and we have your weekly Bates Motel recap below. On tonight’s season 5 episode 3 as per the A&E synopsis, “Norman (Freddie Highmore) helps Chick with a project; Romero (Nestor Carbonell) makes his move; and Madeleine reaches out to Norman.”

Bates Motel begins Caleb (Kenny Johnson) waking up in the basement, chained to a pipe with the side of his head severely bleeding. He looks up to see Norma (Vera Farmiga) sitting in the rocking chair; as his vision clears, he is told he is sorry he now knows her secret and it puts her in a tough spot.

As the figure leans forward it is Norman (Freddie Highmore) in one of his mother’s dresses and a blond wig. He demands to know why Caleb is always putting “her” into tough spots; Caleb apologizes. Norman demands to know why he is there; he says because of Dylan and Emma, that they had a baby, Katherine. Norman says he is happy to have a granddaughter and wishes he could see her.

Caleb begs for him to let him go and he will never bother him again, but Norman says he knows something he isn’t supposed to know, so he needs to figure out what to do with him. Caleb asks what that means, but Norman doesn’t answer.

Chick (Ryan Hurst) is in the living room, asks how Caleb is doing. Norman says (as Norma) that Chick has been kind and a very good friend to Norman; but wants to know why? Chick says he enjoys helping people, and when asked Chick says trust is the foundation and the bedrock of every relationship, and Norma can trust him.

Norman is relieved that someone else knows. Chick offers to stay there for a while to protect Norma from Caleb. Norma agrees to let him stay and shares that he is afraid of Caleb. Sheriff Alex Romero (Nestor Carbonell) is being transferred after he was beaten in prison.

Norma wakes up Norman who says he blacked out last night; Norma apologizes for crashing his date. She suggests he stays in bed and she will bring up food for him in a little bit. She tells him not to go into the basement; as soon as she leaves Chick arrives with food for him. Norman admits he doesn’t know what happened last night. Chick asks if he blacks out like that often. He offers to stay there to check on him every once in a while.

Norman protests but Chick says he knows about Norma and she says everything is fine; assuring him he is not there to judge him for anything. He says they are all in this sideshow together and then they die.

The deputies transferring Romero, stop for coffee and a bathroom break. Romero gets him to remove the handcuffs, once its just him and the deputy in the bathroom, Romero takes his gun and asks for the keys saying he doesn’t want to hurt him. He takes his jacket and cuffs him to the pipes in the restroom. The deputy begins to yell but his partner is still in line for her coffee; Romero carjacks someone named Jason, promising him everything will be fine.

As Caleb lays in the basement, he has flashbacks to when Norma Louis and him were children; telling each other that as long as they are together, nothing bad will happen to them. Chick comes down to see Caleb; telling him he is only an observer now and Norman is the one in control. Caleb says Norman is insane, but Chick doesn’t care, he said he will be back in a couple hours to let Caleb go to the bathroom; and goes back upstairs.

Romero stops in the middle of nowhere, asks for Jason’s keys and cellphone; Romero assures him he isn’t going to kill him, he just needs some distance between each other. He tells Jason to walk down the road until a car or policeman finds him.

Chick comes to the basement and shares that he unexpectedly got caught up in his family’s drama. He places a tray of food in front of Caleb and asks for him to share stories about Norma, because he lost her too. He asks about their childhood.

Caleb says Norma was everything to him. He shares that their mom was crazy and would lock them in their room for a day or two, no food, no bathroom and the only thing that got him through all that was being with Norma. He refuses to talk about the incest between them.

He wants to think of her laughing and dancing; and he talks about the look she had that you would think would make a person burst into flames. Caleb bashes his head on the pole.

The vehicle Romero stole gets a flat tire, only to discover that there is no spare tire in the trunk either. He puts it in neutral and pushes it down into a ravine and quickly hides behind a tree as a truck drives by.

Norman comes downstairs when he breaks a picture, he offers to replace it. Norma says its because of his Kimono and Norman tells her not to be rude. Of course Chick can’t hear her, but offers for all 3 of them to have dinner. Chick is recording their conversation, he offers to fix the window and things around the house.

Norma says she has no money so what would he get in exchange; he says a roof over his head and friends. He has been very lonely for a long time. He says he cane be useful and discreet. When Chick doesn’t respond, Norman asks if he didn’t hear her. Chick says he cant hear because of the beatings, so Norman repeats what she said.

Madeleine Loomis (Isabelle McNally) arrives at the Bates home to see Norman. Chick announces her arrival and Norman introduces them. Chick steals one of the cookies she baked before Norman takes her down to the motel office, where they talk about their awful date.

She breaks down that she is lonely, and if she was honest she just wanted to have dinner. Norman tells her it is okay; she admits that Sam (Austin Nichols) has left for Seattle again and she doesn’t even care when he is gone any more. She says it feels like she is living at home with a stranger and she doesn’t know what is going on with him. Norman suggests she ask him, but she feels they have just grown apart.

She admits she feels safe talking to Norman about it. She asks if they can be friends and hang out sometimes, even though she is married. He offers for them to take a walk in the woods. He looks at her, saying sometimes she reminds him of someone he loved very much: his mother. He says that’s a good thing.

Meanwhile in the basement, Caleb dreams that he broke free of the pipe. He opens a door in the basement, where he grabs and hugs Norma, who tells him it is over now and he didn’t lose her; that he can always find her and to just look. She goes silent, and when he backs away he sees Norma’s dead corpse. He wakes up from the nightmare.

Norman returns home and Chick shares that his Uncle Caleb is in the basement and a little freaked out. Chick says Caleb believes Norma is dead and Norman killed him and Caleb is there to kill him. Chick tells him that Norma had a conversation with Caleb; Norman says he will deal with the problem, and to go find mother upstairs to make sure she hasn’t left and done something crazy.

Norman goes to the basement, saying he is Norma and can’t release him. Caleb confronts her that Norman doesn’t even know about him being there. Caleb tells her that Norman needs help, and he would help her with Norman; “She” says it will never work because they both are in love with her.

She says she doesn’t want to hurt him even though he hurt her in the worst possible way he could. He apologizes again, and she says not to talk about it because it can’t be fixed. She just tells him let’s be together. Norma says that Norman will have to kill him because she can’t do it. He tells her he loves her.

Romero arrives at a house, when he is about to steal a car when a young boy pulls a gun on him. He doesn’t believe his story and ask he goes to leave to get his mom, he shoots Romero accidentally in the stomach.

Chick continues to record what is happening in the Bates family; he arrives at a shop where he wants to buy a typewriter. He says he is writing a novel about true crime.

Norman is in bed while Norma rubs his back. He asks what happened, she explains Chick found him passed out in the basement and brought him up to bed. He confronts her on lying about Caleb being in the basement. Norma tells Norman she needs him to kill Caleb because she can’t do it. She tells him to be strong and not pass out and do it.

Norman says he can’t and suggests that maybe they don’t have to live like this; saying he felt happy and even took a walk in the woods. She grabs the gun, and throws in his face that she has done this more than once for him. She says it is too dangerous for him to stay alive and he knows too much. She says he has got to do this for her. She says fast and true, through the brain. He takes the gun.

Norman goes to the basement, caulks the gun and Caleb tells him to go ahead. Norman uncuffs him; tells him to leave and never come back because he just wants to be left alone. Norman screams for him to go because he doesn’t want to live like this anymore; he fires the gun repeatedly chasing Caleb out of the house and off the property.

Norma runs out saying he will ruin them, she grabs the gun and chases Caleb continually shooting. Chick is in his car returning to the Bates home and looking down at his passenger seat; just as Caleb runs in front of his car and runs him over.