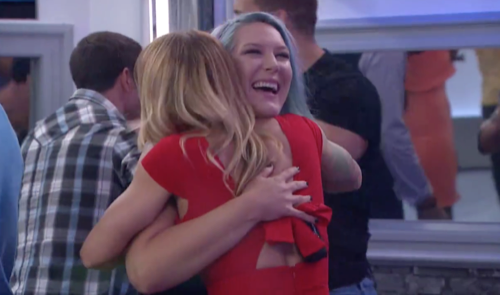 Tonight on CBS Big Brother 19 returns with an all-new Thursday, June 29, 2017, episode and we have your Big Brother 19 recap below! On tonight’s Big Brother season 19 episode 2 as per the CBS synopsis, “The first Head of Household is named following the HOH competition.”

Big Brother (BB19) begins tonight after Cameron was the first person evicted and Paul, from season 18 takes his place. Christmas got exactly what she wanted and now knows 2 people wanted to evict her, she is determined to find out who they are. Josh is feeling nervous and anxious; we quickly learn that Josh and Jason were the two who voted to evict Christmas.

Megan and Alex are working a strategy together while Josh, Mark and Jason talk while Josh’s paranoia is kicking in; they are shocked 8 people voted to keep Jillian. Jason says they need to stick together.

The next morning, Ramses, Megan, Alex and Jillian talk about who will be HOH and who they would vote out; Megan says she would nominate either Mark, Paul and Cody saying if any of those 3 go she is happy. Jillian says if they get rid of a girl, they are taking over.

Josh lays in bed, crying that he is a mama’s boy; Christmas comforts him. He feels Christmas is genuine and feels guilty for the vote he gave her. She is a great competitor and feels Josh isn’t going to last if he keeps this mentality. He warns her to be careful who she trusts, a lot of people will gravitate towards her and says in his gut he doesn’t trust Megan.

The doorbell rings and Nicole the winner of season 18 Big Brother. She hugs everyone while Kevin sits on the couch having no clue who she is. Megan runs over and tells him what her name is and who she is. Paul walks over and gathers her in his arms, kissing her. She says she loves him and is rooting for him. Nicole separates the guys and girls and informs them she is hosting the first Head of Household (HOH) competition of this summer.

Nicole reminds them she won the first HOH last season and went on to become the winner. The HOH will be safe from elimination that week and will enjoy all the perks and privileges of being HOH; but with those perks they need to nominate two people for eviction.

In this HOH competition, the house mates will be divided into teams of four, 2 women, 2 men per team; a random draw will pick the teams. Outside the teams arrive and it looks like a jungle. Jason, Alex, Christmas and Ramses are on the orange team. The yellow team is Elena, Jillian, Kevin and Josh. The pink team is Dominique, Jessica, Matt and Cody while the blue team is Paul, Mark, Raven and Megan.

In the garden of temptation, each team has to retrieve 8 rotten apples, by climbing across the yard on the vines. Once they have completed this challenge, they have to hit their button to enter the final leg of the competition. Only the first 2 teams to retrieve the apples will advance and the other 2 teams will be eliminated. If you find the golden apple and hit the button, that person is safe for the whole week BUT every temptation does come with a consequence. And if one person picks it up, that will eliminate the entire team from any chance of being HOH this week.

Josh wants to go first and he instantly grabs the golden apple, saying he hasn’t made any connection with the housemates and he needs to ensure his own safety. His team is furious as they are all eliminated. He tells his team he knows everyone is gunning for him but he has put a target on his back making everyone hate him.

Mark is in a hurry to get across the vines and when he lands where the apples are, he fell and dislocated his finger but he continues determined for his team to win. The pink team is the first to finish and advance to the next stage; Mark wins it for the blue team and will compete in the next round saying it was worth it to get closer to the HOH.

The house mates are talking about how selfish Josh is, and now he is labeled a coward and is on their radar in the future. Josh says he is intelligent but wants to make it very clear he likes everyone in the house but Megan. He calls her a snake, telling her she can’t talk until he is done, calling her a bully. Josh runs off saying he needs air as Alex says he is digging himself a huge grave, not only did he take the golden apple, he is also stirring a big pot of crazy.

The next round the two teams have to place 7 good apples on the puzzle tree, race back through the vines with all their apples staying on the tree; the catch is everyone must choose one teammate to compete in this final leg and the other 3 will still be eligible for eviction. The winner will be the first HOH of the summer; they choose Cody for the pink team and Paul for the blue.

Cody quickly completes his tree, while Paul’s tree remains mad and drops everything. Cody becomes the first HOH and won the first competition leaving people wondering what kind of terror he will reign on the house.

Paul is laying low as he is trusting in his agreement with Cody from earlier, expecting him to honor what they said. Josh feels he needs to confront Megan in front of everyone. He feels the way she is playing the game is disgusting, he likes her as a person but needs to stop with the snide remarks.

She tells him to point it out what she is doing so she can stop, he says he needs to protect himself because she is rallying against him. He is mad saying when someone is down, you don’t attack her. Megan tries to walk away to avoid the argument. She apologizes and walks away. She says he is the jerk who was selfish and placed a huge target on her back. Kevin tells Josh he needs to lay low but he feels he needs to find a way to blow her up to ensure he is safe in the house.
Paul comes out in Jason’s cowboy clothes trying to lighten up the house; and everyone but Cody doesn’t even smile. He sees right through him, feeling he is a threat and the only way to deal with a threat is to take him out. Cody feels he wants to ride it to the end with Mark and Matt; they don’t have an alliance but they are all on the same page, Mark is happy to be in this situation.

Megan is in the kitchen and Josh comes in and grabs a drink of water, asking her if she will have a conversation with him. She asks him to clean up his mess in the kitchen and agrees to talk to him. He offers an apology for the way he was action, blaming it on his adrenaline and being away from his family. Megan feels bad for him but at the end of the say, he is safe and she isn’t and now she needs to fix the mess he created. She forgives him but won’t forget it.

Cody and Megan talk upstairs in the HOH room, saying she doesn’t want to go up on the block and is willing to align with him by voting for whomever he is. Their conversation is really one sided with Cody hates begging and selfishness.

Cody knows he needs to have a team, looking for people similar to him who are level headed and won’t crack under emotional pressure. He wants to align with the babes too, he feels Jessica is distracting his game. The last group is the outsiders, feeling there is no tough calls and he needs to decide who he is putting up.

Mark goes to see Cody and talks about the 3 outside chicks: Alex, the biggest threat, Megan and Jillian; he tells Mark that if there is a way to do it he wants to backdoor Paul. Mark feels like Paul could be a great ally, who is loyal but Cody feels Paul will play both sides and will not always be with them. Cody calls Paul a wild card and like last season he played one side but in the diary room he flipped.

Cody informs everyone its time for the nomination ceremony. They all sit around the table as he presents the nomination block and the first house guest he nominated is Jillian and the second is Megan. He tells Megan he just doesn’t like her too much and Jillian’s associate lies with Megan. He adjourns the ceremony. Paul thinks he is okay with Cody but with him being the only vet in the house, he doesn’t know where he stands. Cody says if one of the girls comes off the block, Paul could be going up there.