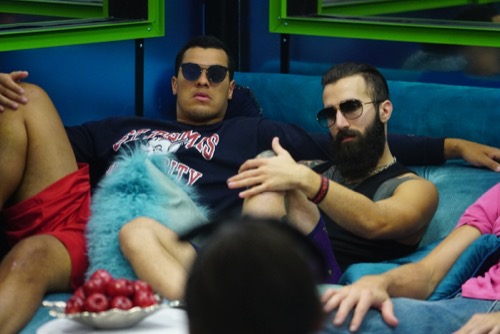 Tonight on CBS Big Brother 19 returns with an all-new Sunday, July 16, 2017, episode and we have your Big Brother 19 recap below! On tonight’s Big Brother season 19 episode 9 “HoH and Nominations” as per the CBS synopsis, “The new Head of Household moves into their HOH room.”

Big Brother begins on Day 23, as the house mates battle it out for the next Head of Household (HoH). They are playing the endurance game “Space Cadets, where they must hold onto a wall that tilts back and forth. They have cold water being sprayed on them, steam and slime; Paul is laughing as he watches from the sidelines.

Paul is determined to cause some chaos after Cody dropped the bomb that Mark and Dominique knew about his back-dooring Paul. Josh falls at 21 minutes and joins Paul. Mark is shaking and his left side is giving out; he drops at 28 minutes.

Paul asks Mark about the votes, and he is positive it was Kevin. We learn that on Day 20, Paul told Kevin to vote for Ramses and no one would suspect it was him. Paul puts suspicions on Christmas, suggesting they don’t know who she voted for.

Raven jumps off at 47 minutes and the remaining house guests get blasted with green slime. Ramses says the goo is all over the place and irritating him, he jumps off at 61 minutes; he prays that Alex or Jason wins HoH as he doesn’t trust anyone in the house.

Kevin falls off at 63 minutes. Jessica closes her eyes and thinks of her happy place, saying Cody is probably watching and proud of her. Paul and Mark are concerned that Jessica isn’t even budging. Matt wanted to stay on longer than Jessica but he falls off at 73 minutes, leaving Jason as the only guy left standing.

Jessica drops at 86 minutes, she is really disappointed in herself. She really wanted to get revenge. Dominique falls off feeling her and her team are safe for the rest of the week. Jason, Elena and Alex remain. Jason and Elena say they can both remain their for the rest of the night, as Alex struggles with everything hurting. She vows to stay on the thing until her hands fall off.

Jason has pain in his hands and feet but he knows Alex isn’t going to jeopardize either one of them but they don’t trust Elena. Alex worries if she doesn’t win HoH, she will be on the block for the third time. Alex talks about making a deal. Jason says none of them are going home, Alex agrees. Jason wants Alex to win anyways and Jason drops, telling Alex and Elena to battle it out.

Alex promises Elena she will keep her safe, and since she knows the entire house wants Jessica out, she feels safe in allowing Alex to win the Head of Household; Alex promises to keep Elena and all her friends safe. She drops and Alex wins! Mark isn’t thrilled that Alex won but he is relying on Elena making Alex promise to keep him safe too.

Alex is happy with the power but she wants to make sure she doesn’t step on any toes and that people stay loyal to her. Paul is super excited that Alex won because they have been secretly working together and now that she is HoH, they can strengthen their bond and get to work.

Jessica talks to Jason saying people betrayed them and if she is safe this week, she wants to get revenge for Cody. She admits her and Alex do not have to be best friend, but if she wants to remain in the game they need to unify all the floaters to take out the other side of the house. Jessica suggests the other side will be using Alex as a puppet and wants to see some of the alliance broke up and put on the block. Jason wants to go after Matt and Dominique.

Kevin asks Jason what kind of deal Alex made and Jason says Alex promised not to put Elena or any of her friends up. When Alex joins them she shares that she wants to put up Jessica and someone else but both Kevin and Jason tell her not to, as they need her on their side. Mark wants to know if he is safe and Alex tells him if Elena said he was safe, then he is safe; he doesn’t feel confident.

Jason and Alex talk again and she wants Jessica on the block, she suggests they could back door someone but Jessica is definitely going up on the block. Alex understands she is HoH and she holds all the power but she tells him they are part of a collective and they have to remain loyal to that and keep calm in the house. Jason disagrees.

Paul wants to know who Alex is targeting, he doesn’t care about Jessica as she is a loner in the house. Josh is crazy and seems to trust Paul more than anyone in the house. She won’t target Jason and Ramses, so that means she is going after someone on his side of the house.

Paul first step is to talk to Alex, revealing that Dominique and Mark are a bit sketchy. He shares what Cody told him and says this is perfect for her and him and she trusts Paul 100%. His second step is to talk to Mark and Dominique and tell them exactly what Cody said about them. Dom says in the Big Brother house, paranoia grows by the second; Paul says he doesn’t believe what Cody said but he needs to use this last week of safety to his advantage by causing huge pandemonium in the BB19 house.

Elena and Alex talk together to figure out who those people are that Elena wants to keep safe. She says the only people she wants to protect is Mark, Raven, Matt, Dominique and Paul. Alex needs to make her feel comfortable putting one of them on the block but before they can discuss it any further, Paul joins them. Elena is furious that Alex wants to put up Dominique and Mark and this is not honoring their agreement. She hopes Alex will stick to their deal.

Paul locks the door behind Elena and tells Alex what her options are. He knows Mark and Dominique are clearly up to something; but this is her choice but she needs to draw the line in the sand and take a shot. She is thinking long-term and Paul says Dominique is better to put up than Mark because he isn’t great at competitions nor as smart as Dom. Paul feels she is using her little talk show gig as a way of obtaining information.

Kevin has been taking Ramses under his wing; trying to teach him not to kick the dryer shut, and to stop burping all the time. Kevin feels he needs a role model and he can teach him about life. Ramses loves that he teaches him history, street smarts and self defense. He loves the kid but feels he has a long way to go.

Jason and Jessica are told to return to the Den of Temptation as their V-Toad curse is lifted; they celebrate being out of their toad costumes. Jessica admits the past week was really tough on her and she never wants to see a toad or lily pad ever again. She’s thrilled to be able to sit in a chair again.

Raven reveals that she has a disease called Gastroparesis, which basically means her stomach is paralyzed and cannot digest food at all. She has a stomach pacemaker named “Thor” that allows her to eat food. There is no cure for this disease but without the pacemaker, she wouldn’t be here. She calls the pacemaker her second heart.

She used to hate her scars but now they are part of her story. She’s had 8 stomach surgeries and in the hospital for 6 months, feeling she wouldn’t make it out alive. Her pacemaker had 15 settings and she is on number 9; she feels when it hits 15, that is it for her. Josh tells her she has a great spirit and says,”God bless you” telling her to never change.

Christmas returns to the house after surgery and needs to get her head back into the game. She reveals she had 10 broken bones, 4 dislocated and had to reconstruct the ligament, with the doctor saying it looked like a bomb went off in her foot; she even needed a donor bone. Jason holds back the tears knowing how much this hurt her.

She learns she will not get full mobility back in her foot ever; as she cries Dominique, Raven and Mark comfort her. It will take about a year to heal up, but arthritis will set in between 1-5 years and in a year they need to fuse everything in order to fix the arthritis. She had aspirations to continue competing but this takes it off the table and she doesn’t know her capability after all this. She tells them to not feel sorry for her, just help her out as things come and hopefully they can rock this!

Mark attempts to clear the air with Alex and wants to know if he is safe. She tells him that she definitely plans to put Jessica up. Alex doesn’t know how she feels about Mark even though Paul said Dominique is the bigger threat. She needs to get rid of the showmances in order to take control of the house.

American fans are reminded to vote for the next house guest to be tempted in the Den of Temptation. Week 3’s temptation is the Halting Hex. Please choose wisely as a houseguest can only be tempted once this season!

Back in the Big Brother house, Dominique comes up to the Head of Household room wanting to talk to Alex about the odd feeling she has. Alex says they should be solid for sure but Dom senses there is some fishy stuff going around that they want Mark and Dominique gone. She tells Alex to go with her gut and she will be able to figure out the “disconnects”. Alex sees a red flag when Dominique begins to through her own people under the bus.

The house guests sit at the table for the nomination ceremony. Alex puts up Jessica and Dominique. She tells Jessica they haven’t made a real connection and tells Dominique after their one-on-one, she gave her things to think about that set up some red flags and Alex didn’t like some of those things. She adjourns the meeting.

Dom feels Alex isn’t working alone, she feels betrayed and lied to; she cannot wait for the Power of Veto (PoV) competition. Jessica isn’t shocked at all and hopes she can save herself in the PoV competition. Elena is a bit peeved that Alex broke the deal but she is happy it isn’t Mark on the block. She feels secure that her and Mark will be safe through live eviction. Paul is happy his mission is accomplished and wants to sit back as the seeds of doubt grow and they will stop going after the vet in the house and start going after each other.