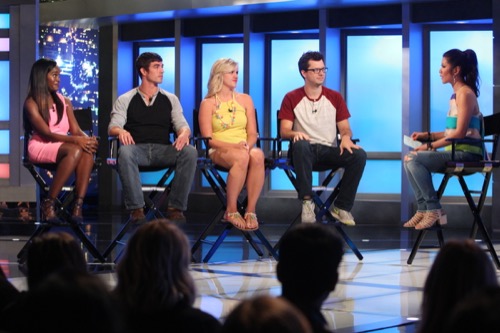 Tonight on CBS Big Brother 19 returns with an all-new Sunday, July 21, 2017, episode and we have your Big Brother 19 recap below! On tonight’s Big Brother season 19 episode 12 “The previously evicted houseguest battle for a place back in the house.”

Tonight Big Brother Season 19 (BB19) begins tonight with the special event that is sure to shock the remaining Big Brother House guests (HG) after four evicted houseguests will compete in 3 epic battles for a second shot at half a million dollars. BB19 host Julie Chen welcomes everyone to the Big Brother Battle Back Showdown!

Cameron who was evicted within hours of arriving at the BB house, when Season 18 vet, Paul returned and took his place. Jillian was evicted the following week when she allowed others to play the game for her. Cody quickly became the villain in the house during his reign as Head of Household (HoH) and was voted out by HGs when everyone felt betrayed by him; before Cody left he threw shade at Dominique and Mark. Last night, Dominique was evicted after she accused Paul of being the snake and said Elena was just as bad as he was.

Tonight these four will get a chance to battle back into the game, but for the first time ever, if they want to return, they must win an epic showdown against someone in the house.

BB19 host Julie Chen shares that this summers’ return to the game is going to be more challenging that Season 18’s Battle Back because tonight there is no guarantee that anyone will return to the house. She welcomes back Cameron, Jillian, Cody and Dominique.

They each stand in Evictionville and in order to escape they must win 3 competitions; the four will compete against each other in the first challenge of the night, the top 2 finishers advance while the other 2 go home for good. The 2 winners will then go head-to-head in the second competition of the night; win that and they are the finalist but in a Big Brother first, this Battle Back will end in a showdown, the winner against a challenger from the BB19 house.

The current HGs will vote one of their own to compete against the final evictee in the most important challenge of the night; if evictee wins, they are back in the house, but if the HG challenger wins all evictees are going home for good.

The first game is called Maze Race, they must maneuver their ball through the maze using a rope and pulley system to get it to the finish; but if their ball falls through a hole, they need to collect it and start over. Cameron is determined to win as he only spent 11 hours in the house, while Dominique feels she was wrongfully evicted and wants to get back in to get Paul, the Snake.

Jillian has to start over when her ball falls in the first hole; Cameron is in the lead but the ball drops and he has to go back to the beginning. Cody is focused and cautious, feeling as long as he is patient he can do it. Jillian is forced to start again, as Cody is all ready at the final round but there are 3 balls at the end; he is the first to complete the maze. He isn’t excited as there are 2 more rounds to go but happy he is one step closer to Jessica.

Cameron is close to the end, as Jillian can’t level the maze. Dominique is busy praying that she makes it back to the house to take down Paul and his minions. Cameron makes it to the end and joins Cody, advancing to round 2.

The second battle of the night is a game called Billboard Bashers. On Julie’s go, they will use their launcher to catapult balls at their individual billboard; each billboard has 10 panels and the first player who knocks out all 10 of their panels will advance to the final competition of the night. If they run out of balls, they need to retrieve them to keep playing.

Cameron and Cody both knock out a panel, but have to run around to collect their balls to continue. Cameron figures if he can figure out the mechanism of the launcher, he will have this competition down. Cody is surprised that Cameron is beating him with 4 down to his 2.

Cameron is surprising himself when he just keeps hitting panels with 6 down to Cody’s 3; Cody suddenly figures out he needs to lob the ball softer and the panels suddenly drop and they are tied at 7 each. Cody takes the lead at 9-7 but Cameron still feels its anyone’s game. Cody wins the game and advances to the final battle of the night. Cameron shakes hands with Cody calling him a beast and leaves the competition for the final time.

Cody learns he will battle soon with the house challenger and since the HGs are picking their challenger, he gets to pick the game they will use in the competition – Maze Race or Billboard Basher; the games will be a little different. Maze Race will have a new maze and in Billboard Bashers, the billboard will be spinning. He chooses Maze Race.

The Houseguests learn about the BattleBack Showdown from Julie in the living room. They learn the four evictees battled it out in the backyard with a chance to get back into the game and one of them won that chance. Mark is pissed off that he will have to welcome someone back into the house that he turned his back on. Julie doesn’t tell them who was the one who is back for the final challenge.

Jessica assures Mark in the bathroom that he is fine and tells him not to do anything crazy. Paul is furious that if Cody comes back he will have to work all over again to get him evicted again.

The Big Brother Houseguests are called back to the living room, where they learn the BIG twist of the game. She reminds them of their motto, “Expect the unexpected” and says the twist is the HGs as a house will have the chance to stop this evicted houseguest dead in his/her tracks and preventing them from returning to the game; they have to go individually to the Diary Room (DR) and vote for the one person they want as the House Challenger and they will face the evicted houseguest in the Battle Back Showdown. They will not know who the Challenger is competing against until after the vote.

If Paul wins, Cody is out of the game but if he loses Cody returns to the house. Josh is happy that the house can agree on something and everyone feels the season 18 vet knows the games the best and is their only chance of taking out Cody. Cody is not surprised in the least that the HGs chose Paul.

The rules to the Maze Race are explained to Paul and the competition begins. Paul struggles to figure out the pulley system as everything is reversed; Cody is a bit more confident as he knows how to use the pulleys but needs to concentrate as its a new maze. Paul has a lot of pressure on him because the house is relying on him to make sure Cody stays out of the game and house.

Cody checks out Paul’s maze and isn’t too concerned because he is behind him. Paul doesn’t want to look at Cody’s game; Cody is in the final steps and Alex prays his ball falls as Jess says if Cody blows this she will kill him, she pleads for him to win this for her. Cody wins the game and Jess runs into his arms. He is officially back in the game. He feels this is divine intervention and if Paul was a good chess player he would have bet on the Battle Back and now that he didn’t, Paul’s safety is over and as soon as he gets a chance he will take him out.

Jessica is so happy and feels between her and him, they can turn this game around. Mark is stunned and pissed off that Cody is returning after he threw him under the bus and is worried about what he will stir up. Josh thinks this completely sucks, he has mad respect for Paul for trying but now they need to figure out a way to get Cody out the door.

Paul calls Cody the ball maze master but advises him not to get too comfortable, reminding him that he got him out of the house before and isn’t afraid to do it again. Julie says no one should get too comfortable as the Head of Household competition will begin shortly. She says Cody is back in the game and could become the new HoH. Be sure to tune in Sunday, July 23, 2017 to see how his return shakes things up and who is nominated for eviction.