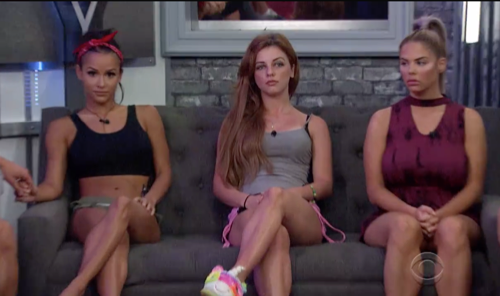 Tonight on CBS Big Brother 19 returns with an all-new Wednesday, August 10, 2017, episode and we have your Big Brother 19 recap below! On tonight’s Big Brother season 19 episode 21 “Another houseguest is evicted from the compound. The remaining players compete to become the next Head of Household.”

Big Brother Season 19 (BB19) continues tonight on Day 48 when Mark adjourns the Veto meeting. Jessica finds it pathetic that its taken half the season for most of the house to send the two of them home. Josh is still gunning for Elena after her manipulations and fooling most of the house guests (HG).

Kevin says its time for him to play harder and talks to Jessica about aligning and getting rid of Mark, Matt, Raven and Elena out. He feels the key to get further in the game is to not play with them. He wants to use Cody to break up the showmances in the house and its the showmances that turned that back on Cody early in the game and promises he won’t vote against Jessica to ensure he doesn’t go against him. Jessica agrees, that she wants Cody to be safe for as long as possible and Kevin could be one he could trust in the future.

Jessica sits with Cody and says Kevin wants to talk to him and for him to stick to his side of the house which is Jason, Alex and Paul. Cody appreciates the olive branch in the game but doesn’t trust the people he works with, knowing there is no trust and loyalty with them.

Meanwhile Kevin talks to Alex and Jason, saying after Raven, Matt, Mark and Elena are out they can get rid of Cody. Alex doesn’t want to add Cody because she likes who she is working with now; he then talks to Paul about having Cody on their team. Paul doesn’t trust him and swears he will never team up with Cody EVER! Jason and Kevin go to talk to Cody who promises if he becomes HoH he will destroy the couples who betrayed him. Cody says the deal is null and void since he will put up anyone he wants.

Jason tells Paul and Alex what is going on and Paul is furious that Kevin is making deals without talking to them and Paul doesn’t like that him making deals so publicly will make them public enemies with everyone else in the house. Josh continues to campaign about Elena and the two sides everyone fails to see of her.

Paul, Jess and Josh talk about how many showers Matt takes and Jess asks Josh to spell the word drought and when he does, Paul jokes that he got her on that one. He is desperately trying to be nice to Jess saying he has a college degree and a business but she mocks him and acts very ignorantly towards him.

Paul convinces Josh to ask her how to spell evicted. She says today isn’t the day, Cody calls him fat and ignorant when Jess says she thinks he is a moron and tells him not to speak to her nor address her. Josh says she played herself. Cody continues to threaten him saying this isn’t a game, this is real life and that he will get him outside of the house.

Josh shouts at her that she is going home now thanks to Cody. Josh says he honestly tried to save her add this week, but she blew it. Paul joins Josh in the HoH room while he is crying; Paul tells him he did great standing up for himself as no one should call him a fat ass or anything. He should be proud for standing his ground. Jess made it personal and said he is going to make her life a living hell.

Josh comes outside and begins playing the pots and pan, and Cody runs after him, Alex jumps in between them before it physical. Kevin says there is no way he can align with Cody now after what he has done and the deal is dead.

The HG sit in the living room for the LIVE eviction. Raven says its been an amazing summer and she wants to continue staying in this house and personal thanks them all for accepting her disability and thanks them for making her feel normal. Elena tells the houseguests she loves them and her Mommy and asks her to kiss her dog and as an act of faith she is thanking everyone for keeping her in the house this week.

Jessica stands and thanks everyone at CBS and being there is just a dream. She tells Cody he didn’t ruin her game and made all of this worth it. She says her and Cody are not the biggest targets, its not Forrest Gump (Josh) but its actually Mr Friendship (Paul) and if they leave him in the house any longer than they have then they are bigger idiots than she thought they were.

Jessica talks about how she won the Power of Veto, and since it was the anniversary of her father’s passing, that he made her feel bad and ever since then she had zero respect for him. She thinks Paul is great but he once told her to sit back and watch, and not ask questions; it was a game and she didn’t want to just be a “sheep”. She says their relationship was the real deal and she loves him. BB host says she truly believes Cody loves her.

Cody, Paul, Alex, Kevin, and Josh all left her goodbye videos, when Josh was done calling her a linguine she said she was soooooo glad she never had to hear that voice again. Julie tells her that its true, she really wasn’t his target and Elena was; unfortunately she did not make it into the Jury house.

We return for the live Head of Household (HoH) competition. The game is called “Hocus Focus” and they are about to watch a series of performances and magical transformations, they are to pay close attention to everything they see because after each performance Julie will ask them a series of questions about what they just saw; the answer will be true of false. If they get the answer wrong they are eliminated and the last person standing will be the new HoH.

Mark, Jason, Paul and Kevin get the second question wrong; now its time for their second performance. Christmas leaves the competition after question 4. Cody, Elena and Matt have been eliminated while Raven and Alex are the final 2. Alex with the competition and is the new Head of Household; everyone celebrates except for sour face Cody.

After the HoH competition, Julie congratulates everyone for at least making it to the Jury house, but from this moment on she tells them to fight for their life because this season there will be no Jury Battle-Back; once they are out, they are out!

Tune in Sunday, August 13 for the final Temptation Competition and to see who Alex nominates for eviction and Thursday will be Double eviction time!