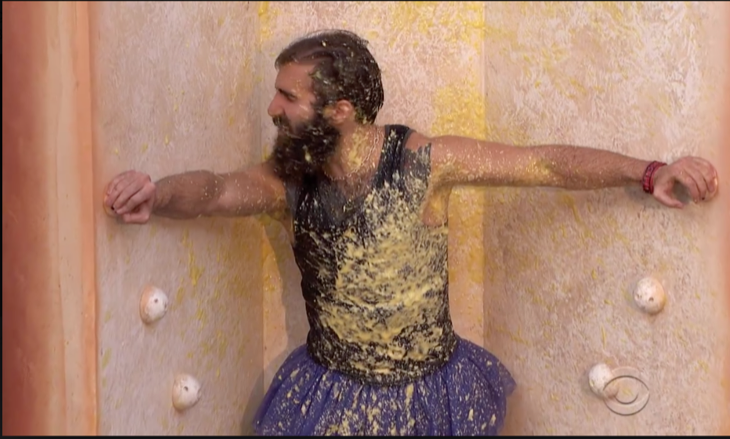 Tonight on CBS Big Brother 19 returns with an all-new Sunday, August 27, 2017, episode and we have your Big Brother 19 recap below! On tonight’s Big Brother season 19 episode 29 “The new Head of Household moves into their HOH room. The tree of temptation is offered.”

Big Brother Season (BB19) continues on Day 65 where the houseguests (HGs) are in the midst of the Head of Household competition; where they are standing inside hot dogs being sprayed with ketchup and mustard; but before the vote Alex met with Paul and Jason suggested they should throw one vote away so people will think it was Kevin, so he can become the target in the house. So when it came to eviction night Alex slipped up and chose to evict Matt, she messed things up for her alliance and now everything depends on one of them winning the HoH this week.

Christmas is unable to participate; Kevin falls off at 17:26, the first to be eliminated. Matt falls at 20:23. Josh falls at 30:24; and now all their hope is on Paul for a win. Raven is the first to want to cut a deal, but no attempts to compromise with her. Paul doesn’t care who wins HoH and drops at 53:33 with Raven dropping seconds later.

Alex and Jason are the only two left in the competition and they talk about deals so either one of them can have the HoH; Paul says they are not making a good safety for themselves as everyone in the house is really getting to see how close they are. Several HGs are watching the ridiculous negotiations and Matt is beyond annoyed since they are each others “ride or die”. Kevin says he wasn’t the second vote against Matt, but Josh tells him to stop preaching as Kevin feels that this is just conniving stuff. Alex jumps at 1 hour 1 minute and Jason becomes the new HoH.

Josh hates that Jason is HoH, and hopes that Jason will take a shot for them and not against them; Matt feels Alex will be the only one safe this week, so it will get pretty crazy in the BB house.

Jason runs around like an airplane as Christmas places the HoH around his neck. He feels he will be the one to seal the deal on the final showmance. Matt is frustrated because he has no idea who the two votes were against him last time and hopes that Jason makes a big move and goes after Kevin. Raven also worries about her and Matt because all the people who were in showmances have been evicted and hopes the streak ends now.

Josh tells Alex what Kevin said to Paul on the sideline during the HoH competition and that he voted for Mark like he was supposed to; Alex feels Kevin is trying to mess with their game. Raven conveniently overhears the conversation and they push that the rogue vote against Matt was Kevin.

Kevin and Jason meet in the pantry where Jason admits him and Alex were the ones who voted for Matt; Kevin says if they wanted to play it that way he would have voted along with them. Jason tells him to act like he doesn’t know the truth. Jason is worried but feels things will be okay even though Kevin knows now.

Most of the alliance meet in a room where Josh and Christmas deduce it has to be between, Alex, Jason and Kevin. Matt says Kevin has been acting strange the past few weeks and are pretty sure he is the rogue vote in multiple evictions this week and he is a really big target and they want him up on the block.

There are several moments where HGs attempt to translate what Raven is saying; Matt jokes that he only understands her about 50% of the time.

Paul talks to Alex where she says they are planning to put Raven and Matt up on the block, but their real target is Kevin, during veto they want to take Raven off the block and put up Kevin. Paul thinks everything is going according to plan and he will talk to Matt and Raven to let them know there is another plan in play to get rid of Kevin. In reality, one of them is a target though! Paul is beginning to wonder if he is being swindled.

Alex tells Jason that only them and Paul can know about the vote; he struggles and squirms, then admits he screwed up. She is pissed that he told their very target what they had done and now Alex feels Kevin is a liability to their game. Christmas and Paul discuss how weird Raven and Matt are, even thinking she is a compulsive liar and bizarre, and all her stories are just too unbelievable.

The Tree of Temptation springs to life, everyone watches to see who will take one. Alex wants to make sure no one takes an apple from the tree, so she goes downstairs and talks about how bad each apple is, even if it were a good one. Christmas reminds Josh they are 2 evictions away from top 5 and Josh wonders if its Paul who is doing the rogue votes; he says he isn’t doubting him but Paul is getting close to Jason but she says they have each other and buckle down and trust what they have.

Jason tells Kevin he is mad at him for falling so soon but he says he had surgeries on his wrist, but doesn’t want anyone to know. Kevin aligns himself with Jason, Alex and Paul. Kevin questions Jason about the second vote but Jason tells him to keep his mouth shut and ears open; Jason wants him to stop digging and worrying so much.

Jason reveals to Raven and Paul that Kevin had a lot of surgeries, and they are all talking about how his social game is amazing but when it comes to the physical parts he isn’t very good. Raven feels safer and will tell Matt so he can feel better about the whole situation. Jason and Paul feel if they split Matt and raven, she will crumble.

The nomination ceremony begins and Jason places Raven and Matt. He says they probably feel comfortable up there and is sure everyone understands what he actual agenda is and talks about winning the PoV and adjourns the ceremony.