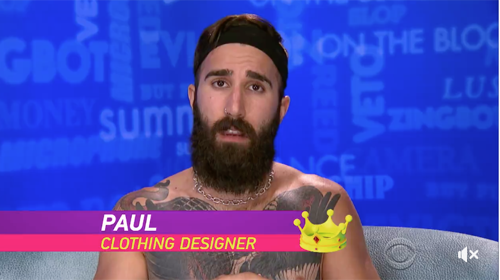 Tonight on CBS Big Brother 19 returns with an all-new Sunday, August 31, 2017, episode and we have your Big Brother 19 recap below! On tonight’s Big Brother season 19 episode 31 “Another houseguest is evicted from the compound. The remaining players compete to become the next Head of Household.”

Big Brother Season 19 (BB19) continues on Day 72 and the couples continue to turn on each other; Matt and Raven furious that Jason didn’t keep his promise and remove Raven from the block. The Veto meeting was adjourned on Day 69, and Jason stands behind his decision as he wasn’t comfortable with putting up Kevin.

Raven cries tears of anger as she says her and Matt have played a loyal game and sucks being on the block with Matt and won’t campaign against him. Matt kisses her, telling her to relax and she will still be there. Matt respects the game play but doesn’t respect that he’s hiding in the storage room with Alex and should come and explain his decision to everyone.

Paul comes outside and attempts to calm Raven down who simply wants Jason to come out and be a man, and should have told her he wasn’t going to use the veto. Matt’s mad he is hiding and Jason is refusing to come outside, watching from the kitchen. Jason is ready to talk but Raven says he is two-faced but he says he truly didn’t promise anything to anyone.

Christmas, Paul and Josh are laughing in the bathroom as they listen to the argument unfold in the kitchen; not believing this is really real! Jason says he doesn’t remember hugging her and saying that, denying 100% that he didn’t say he was going to pull her off the block, there is a flashback showing that he did. Matt takes Raven away calling Jason a “bitch”.

Alex says she knew this was going to happen and now this is going to ruin her game. Jason denies hiding out and admits that actions speak louder than words. Jason confronts them on not asking him what the plan was and again denies he said that to Raven and Matt snaps calling him a “punk-ass bitch”.

Matt and Jason continue to scream as Paul pulls Raven outside trying to call her down and saying they are going to play; now that Matt is going home, Paul wants to make sure she is joining him and his alliance to take a shot back at Jason and Alex. Matt confronts Jason and Alex saying that even Cody had the balls to come out and stand by his decisions, mocking Jason to stick to his core values.

Matt knows he is leaving but wants to help Raven to further his game once he is gone. He asks everyone who voted for him last week to be evicted; Jason finally admits he was one of the two votes but claims he doesn’t know who the other one was. Alex was the second vote but refuses to jump into the pit with Jason.

Everyone but Raven and Matt are in the kitchen talking about Matt and when Kevin leaves, Josh stops them from stopping him because he says he is going out there for information. Kevin wanted Matt to know the truth that he did not vote for him to leave; Paul comes out to the pool too. Paul finds it weird how Matt and Kevin had nothing to do with each other before jury and now he is getting chummy with him, he needs to rethink it. Paul goes back inside and tells Josh and Jason what Kevin is doing, gathering Jury votes.

Josh turns on Kevin, when he asks Christmas if she is coming to the pool with him. Josh and Christmas both remind him she has a broken foot and can’t be in the water and a massive argument erupts between Kevin and Josh. Josh says he is onto Kevin and Kevin refuses to enter his conversation, threatening Josh if he calls him a name again. Josh reveals that Kevin was the one who won the $25,000 on the first day they were there; Kevin denies it but refuses to swear it on his kids and tells Josh if he talks about his kids again he will get him.

Paul and Jason pull Kevin away so he doesn’t take the bait. Paul finds it mind blowing that these people would take the bait and run with it; he’s laughing that everyone is a target but him. Josh leaves crying and Christmas goes outside with him so they can’t see him freaking out.

He is tired of being threatened for calling people out on their crap and she attempts to comfort him; swearing she will always have his back but he can’t have her back this way. Christmas says when Josh confronted Kevin and he wouldn’t swear on his kids they now know the truth and Alex is also the second vote against Matt; and she is the super threat they need to remove.

Cody, Elena and Mark have now spent 2 weeks in the jury house and now see how badly they were played by the others as they finally get to see everything that happened leading up to their eviction. Cody comments on how Paul is steamrolling the entire house and they are all playing Big Paul instead of Big Brother.

One week later, Elena selfishly wants the 3rd juror to be Mark but wants him also to win. He isn’t happy with the outcome but thrilled he gets to spend more time with Elena as they watch when Mark was evicted; Mark admits that Cody was right from the beginning. Elena jokes, asking Mark if they need to evict him from the Jury house too!

Back in the BB house, we learn that Matt has already been given a penalty vote against him for breaking the “Have Not” rule. They each have a final chance to sway their votes. Matt stands and thanks CBS and BB for the opportunity of a lifetime, loves each of the HGs and tells them not to kill each other. Raven says being on the BB house was on her bucket list, and thanks the HGs for loving her and accepting her as her. She thanks Matt for being her best friend and it will be quiet without his dork laugh and she will see him after the show.

Matt sits with Julie talking about how he actively worked to evict himself, questioning him why he would throw away half a million dollars on a woman he met 72 days ago. He says she is amazing but honestly says by week 3 that everything she has been through and stands for made sense to keep her in and believes 100% she can win. He thinks Raven and Paul are the best two players in the game and has a really good shot.

He says him and Raven have several things planned for after the show, California tour and they will definitely hang out. He chooses Raven over cereal as he watches and listens to the farewell videos. Julie wishes him well in the Jury House and says we will see him again on Wednesday, September 20, 2017 for the finale where they vote for the winner.

All the HGs are called into the living room where Julie reminds them to expect the unexpected and for the first time ever they have a rain delay in the Head of Household (HoH) competition but in the meantime she asks Raven about how it will be without Matt, she’s excited to see where it goes outside the house. Josh says the most difficult part is being away from his family but he loves the people in the BB house. Paul says the mood is bizarre and dumpy in the house right now.

Julie announces that the HoH competition will be on Sunday, September 3, 2017, so be sure to tune into CBS’ Big Brother to see who is the new HoH and who will be enticed by the Tree of Temptation.