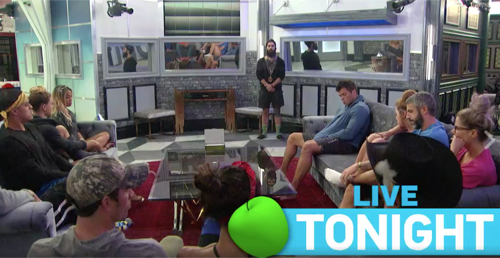 Tonight on CBS Big Brother 19 returns with an all-new Thursday, August 3, 2017, episode and we have your Big Brother 19 recap below! On tonight’s Big Brother season 19 episode 17 “Another houseguest is evicted from the compound. The remaining players compete to become the next Head of Household.”

Big Brother Season 19 (BB19) continues tonight on Day 40, Jessica isn’t sure Paul is telling the truth so asks Matt to speak to her in private. Matt sits down and says he doesn’t want to go there right now, he says its not relevant at this point as its 5 weeks later and things have changed. He doesn’t tell her, feeling a lot has changed since then. Jessica goes to speak to Cody in the yard.

When Jessica asks if his original alliance was with Jason and Alex so they could take out Jessica and Raven; he swears that isn’t true; there is a flashback to Day 13 when he does tell Matt there is no way he can go after Jess and Raven and they need someone else to take them out. Cody gets extremely angry and storms off.

Paul is out and about attempting everyone to say they are going along with her deal. He tells Josh, Kevin and Jason what the terms are to Jessica not using the Hex; he feels its super important that Alex knows what is happening. She isn’t surprised that Jessica wants her out as she is a super mean girl and jealous; she encourages her to bring it. Paul tells Mark and Elena about the deal but doesn’t tell them they don’t plan on removing Alex; Mark is on board because his friendship with Cody has destroyed his showmance with Elena.

Paul tells Jess outside that he can pull it off and she tell shim to give her a little bit. Jess lays down with Cody, he says he feels the damage is done, she wants to know if he is done with her or the game. She says if it doesn’t work out she wants to know she tried everything. If she takes the deal it seals Cody’s fate but if she doesn’t, it will seal hers.

Paul, Mark, Elena, Matt, Raven, and Christmas all agree to abide by her deal if she promises not to use the Hex. Paul celebrates and calls for the Veto meeting to take place immediately. Cody, Jessica and Jason are on the block, if Jason is to be taken off the block, no one is to replace him. Paul wants to take him off the block but he needs to take Jessica off the block so she is more enticed to not use the Hex.

Jason wants Paul to pull him off the block, so he can be used to vote against the actual target, and it will free up the middle person (Jessica) to work on saving herself too. Jessica says “World peace!” and sits back down; Cody has no speech at all. Paul decides to use the Power of Veto (PoV) on Jason and the Veto meeting is adjourned.

Jason thanks Paul for taking him off the block and Jessica says she may have made a deal with the majority of the house but she isn’t going to stand for people publicly disrespecting Cody either. Paul wonders if the deal is on or off after Jess and Cody sat there laughing and mocking him throughout the meeting.

Raven, Jason and Kevin are talking about Jess and whether she will use the Hex to save herself and Cody; all of them think she would be smart not to use it, the worry about a lost week on Big Brother. Jessica listens to their entire conversation.

Jessica confronts Raven in quiet and says it looks really bad and sketchy and the last thing she would want is for Jessica to feel like they are in on something. Raven tries to continue talking to her and Jessica leaves the room saying it looked really bad.

In the kitchen later, Raven asks to speak to Cody and Jess alone. She tells them nothing is going on and Cody wants to know why she is against him. She loves him as a person but the whole house is against him. He tells Raven to be her own person and do whatever she wants. Raven swears its nothing against Jessica and Jess doesn’t buy it. She feels the deal is official dead and now Paul is going to really freak out.

Paul asks if he can stand up for Raven, she fears its going to make it worse but he promises it won’t. He needs to find out for sure if Jessica is still in on the deal. While they continue to talk, Cody returns to the room and stays for their talk. Jess says Paul has a power over the people; he tells her she has the power and to do what she wants. She says she is going to use the Hex as Cody is the only one she can trust. He says that is fine and its time to bring the chaos, telling them “game’s on bitches!”

Paul says if Jessica is going to use the Hex and safe someone like Cody, then its time to play Big Brother; he walks past the kitchen and tells Josh to turn it up to 30. Paul tells Alex the truth and Josh shows up in a tutu, frying pans and begins to dance and sing really loud; Jess and Cody throw the fake apples at him. He tells Cody to come join the circus, come have some fun. Paul asks Cody if he wants to come out and answer some questions and Josh says he can’t because he has a muzzle on.

Alex wants to know why Jess wants her gone and she says she saved her when everyone wanted her to go home. Alex demands to know where Jess put her cat ears that she stole at the beginning of the show. She then starts yelling at Raven for being the one who told Alex to put her on the block. Cody takes Jessica outside and Paul tells everyone to follow, he tells Josh to come out with the pots and pans and tells them they need to keep this party going.

Jess says she hates being the center of attention. Josh says she is a disgusting human being, and everything sucks about them. He tells Cody he has little man syndrome. Raven continues to scream at them and when Paul says all his dogs are barking; Matt thinks this is a disaster and not their finest moment.

Mark says regardless of how Cody is in the game, this is harassment and bullying. Christmas tells Cody she hopes he was worth the $500,000; Cody says he is excited that Jess is going to use the Hex. Jess admits if this is going to be their life for another week and a half, she doesn’t think she can make it and is trying to figure out how long she can stand this. She admits she is going crazy, as a concerned Cody looks on.

It is now time for the live eviction and Julie Chen is about to find out if Jessica uses the Hex. Jessica is given the chance to speak first. She stands and reveals she is officially unleashing the Halting Hex. The Den of Temptation reveals that if Jessica halts the eviction, there will be no one exiting. “Halting Hex rise. Eviction Night Dies!”

Julie confirms that Jessica holds a special power which gave her the power to halt one eviction of the next four evictions, keeping everyone on the block safe. She has stopped the eviction and no one is leaving the house tonight, her and Cody are safe and still playing the Big Brother 19 game.

The house guests are called outside for the live Head of Household (HoH) competition. The power is up for grabs but since Paul is the outgoing HoH, he isn’t allowed to compete. Tonight marks the beginning of Big Brother’s Horror Week and it begins with the game called Gravestone Golf. One at a time, they need to use the zombie leg to putt an eyeball into one of the slots at the other end, the slots are numbered 1 – 35, after everyone has gone, the house guest with the highest score will become the new Head of Household and if there is a tie, there will be a shootout.

Matt gets a 6. Alex gets a 2. Mark scores a 15. Jason hits a 15. Cody steps up and gets a 21. Christmas takes her shot and gets 21. Elena gets a 13. Jessica hits 2. Julie tells them to be speedy and take their shot. Josh goes and lands at number 23. Raven is up and takes her shot, she has 13. Kevin is up and 23 is the number to beat. Kevin gets a 6 and Josh is the new Head of Household; the live audience cheers him on.

Josh now holds all the power. Julie jokes that Josh is celebrating with meatballs. He says its the best feeling in the world to be HoH. Josh says the best thing is being able to hear from his mom.