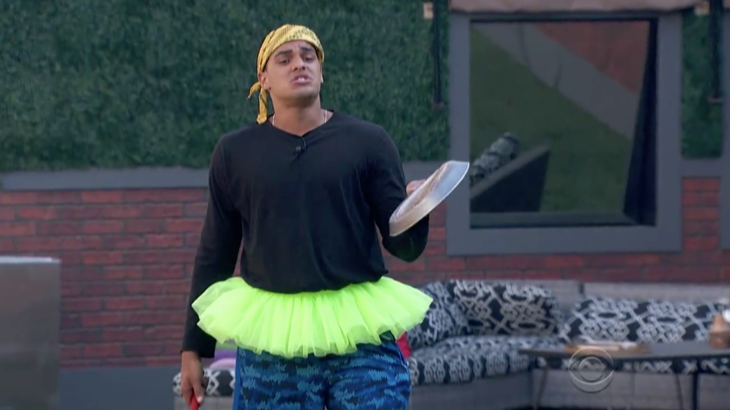 Tonight on CBS Big Brother 19 returns with an all-new Wednesday, August 6, 2017, episode and we have your Big Brother 19 recap below! On tonight’s Big Brother season 19 episode 19 “The new Head of Household moves into their HOH room, nominations and temptation comp. ”

Big Brother Season 19 (BB19) continues tonight on Day 44, Josh has just won the Head of Household (HoH) competition and cries over his win. Paul tells him not to cry on TV and look like a meatball. Cody has nothing to say about Josh being HoH, as he already knows the entire house is against him and Jessica. Paul says his HoH wasn’t a waste as Jess and Cody don’t have safety anymore. Elena asks if she is safe and he says for now they will celebrate; Mark and Josh cleared the air between them a couple days earlier, so he hopes he is off his radar.

Paul says they need to note that Mark and Elena are not happy as Josh says he is about to go on the biggest power trip in the house. Mark comes into the room and Alex comes in saying that Mark and Elena are mad as Mark is sitting right there; Mark asks why she is starting crap and tells him they need to talk. She needs to find an explanation to undo what she just blurted out and says that if he wants to flip flop, this isn’t going to work; he admits he is doing it because he needs numbers and people he trusts.

Josh tells his alliance that he wants to put all four of them – Mark, Elena, Cody, and Jessica all on the block at the same time. Christmas feels they should have a discussion instead of Paul just telling Josh what to do. Paul does worry about them competing in the temptation competition, which could ruin it for them again. Josh confronts Elena, saying it was so easy for her to vote for him to leave that it will be just as easy to put her on the block.

In the HoH room, Josh talks to Christmas and Paul about his talk with Elena and he wants to get rid of Elena over Jess and Cody; Paul has been working on his game relationship with Elena and doesn’t want Josh to mess that up and wants to put his radar back on Jess and Cody. Christmas recommends to put up Jess and Cody to keep the waters calm; they are back on track and Jessica is the target again. When they are alone, Christmas tells Josh to not do everything Paul tells him to do; he winks at her.

Elena wants to talk to Josh again as their last talk left her unsettled. Josh hopes that moving forward if he does her a solid, she will do the same for him. He sweet talks her but she is definitely his target this week. Jess and Cody are the house’s target but he feels Elena is a great liar and extremely persuasive; he also acknowledges that Paul needs to be out of this because he doesn’t see Elena the way he does. Christmas is going to make sure that Josh doesn’t get railroaded by Paul.

After the sun rises, they will be summoned to the Den of Temptation, where once again they must choose whether or not to compete in the temptation competition. The house guests are told to think long and hard as their Big Brother life is on the line. Cody and Jess agree that they both need to play in the competition, one has to win the safety and the other needs to win Power of Veto (PoV) for them to survive another week. The house guests are called to the Den of Temptation, one at a time to make their choice known.

Jason reads that the Big Brother house is haunted and before the house guests moved in they tried to cleanse it of its evil spirits, unfortunately, they opened a portal to the inside out. Tortured souls have left 3 written clues on the windows of the house that will lead them to an item that will close the portal. These clues have letters that will unscramble the item they are looking for.

Once found, they need to place it in the sacred chest and close it, thus sealing the rift between the two worlds; the player who accomplishes this in the shortest amount of time is safe for the week, the player who takes the longest will be the special third nominee. The game is called Strangest Things!

Jason is up first, he screams at some things but says nothing should scare him as he is a 6’5” Rodeo Clown. He finds the letters and needs to figure out what it means. He figures out the word is HEART after he placed a crow in the chest. Elena is up after him and continually yells at the people not to touch her. Mark is scared but doesn’t feel safe as long as Josh is HoH; he says he must win so the meatball monster doesn’t eat him.

Raven says she is a professional ghost hunter and there is nothing in this house she hasn’t seen before but as she wanders through the house, she tells them it’s not cool and not funny. Matt loves the competition, he loves Halloween and scary stuff almost forgetting he has to beat Jess and Cody. Jessica is up after Matt, saying she is going to poop her pants and doesn’t want to do this. She cries out for her mommy and doesn’t want to play; she doesn’t want to go anywhere and it was her plan to throw the competition in the first place.

Kevin hits the buzzer and starts the competition; he is not scared about haunted houses and says people should see the neighborhood he grew up in. When he is done he tells the people they did a great job. Cody is not afraid of the dark, he says nothing is going to rattle him as he knows he needs to win the competition.

Alex does the cross on her chest before she begins, saying this is scary but this isn’t the first time she’s had to deal with demons in the BB house. She finds the heart and plugs her ears as she shouts she is not a fan. Paul says he needs to win this ghost hunt and ensure that Cody and Jessica aren’t safe this week. He admits it was scary but if Jess and Cody remain in the house for another week that would be scarier.

Mark thought it was going to be a simple week and asks Elena who she thinks will be going up next to him on the block and she thinks it’s her. Paul and Josh talk in the HoH room, he tells Josh if they can get rid of Jessica then Elena will come to their side. Josh protests and says Elena is way too shady; Paul tells him he isn’t wrong but there is an order of operations and informs him that Elena is trying to disassociate herself from Mark.

Josh is concerned Paul is not seeing what he is seeing as Paul is super determined to control Josh’s decision. Josh tells Paul to say whatever he wants and doesn’t tell Paul that Elena is still his number one target. Paul says he thinks Josh is putting Mark and her as a pawn but Elena wants to talk to Josh personally and wants to know why. Josh tells her she is a strong competitor and he needs her there to ensure Jess doesn’t win the Veto.

Elena calls his bluff as she knows Paul and Alex are stronger competitors than her; when Josh wants to call Paul to verify what he is saying she continues to try to throw Paul under the rug asking who is the HoH, him or Paul? Josh tries to get her to admit what she just said to him in private, and she beats around the bush; he calls her a liar and she gets upset when he keeps asking her why she is lying. He says he is done and she is going up as a pawn.

The nomination ceremony is about to begin, Josh brings in the nomination block. Jessica is the third nomination and he reveals his two nominees are Mark and Elena. He tells Mark he chose him even though he tried to be a part of the familia, he will always be a meatball in his eyes. He picked Elena, telling her not to take it personally but the whole house knows his objective; he tells Jessica he is gunning for her and he adjourns the nomination ceremony.

Mark is upset that Elena is beside him but promises to fight for himself. Jessica laughs that this was her and Cody’s plan all along and Elena is annoyed that either she goes home or Jessica wins and Mark could go home. Josh says he lied during his speech and he wants Elena out this week, not Jessica.