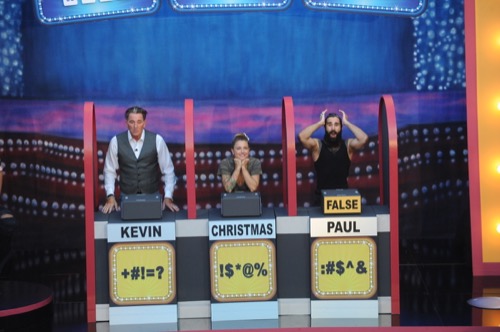 Tonight on CBS Big Brother 19 returns with an all-new Thursday, September 14, 2017, episode and we have your Big Brother 19 recap below! On tonight’s Big Brother season 19 episode 37 “Another houseguest is evicted from the compound. The remaining players compete to become the next Head of Household.”

Big Brother Season 19 (BB19) Ep 37 continues tonight with Paul’s nomination ceremony and the final nomination ceremony of the season. He picks Josh and Kevin. He nominated them saying the pickings for nominations was pretty slim and the importance is all in the PoV this week and wishes them good luck; he adjourns the ceremony. He says Kevin is his target this week, and the blood won’t be on his hands as it will be Josh or Christmas who votes him out.

Kevin is his 4th time on the block in 7 days but he feels he is fine because Paul has always stuck to his word when it comes to him; but just to be safe, he needs to win veto and take himself off the block. Christmas and Paul talk to Josh about why they put him up, but she is worried if Kevin wins the veto competition, he could take himself off and she would go up, absolutely ruining her game. Josh is confident he will rip Kevin’s head off tomorrow.

In the jury house, Mark, Elena and Cody have been enjoying their time in the jury house. Cody jokes about busting out of it as he hates it there. They are surprised to see Matt come in as Cody thinks Matt is a douche. They sit and watch how he was evicted as he explained what the plan was; Matt says Paul is socially running the house but Jason and Alex are running it competitively. Cody walks away and doesn’t want to participate at all.

One week later, Elena, Mark and Matt wait for the next person. Matt thinks they will see Jason next and he is right. Jason wants to see how he got there and wonders who backdoored him; he feels Paul is the ring leader. Elena is surprised that Jason didn’t listen to how direct Christmas was with her speech and really hoped Kevin was going home; but he is evicted instead. He feels Alex knew this was coming and didn’t tell him. Cody loved his exit.

One week ago, they wonder who is the next HG to arrive and when they see Raven, Matt quickly jumps up to hug and kiss her; she was more shocked that Josh and Christmas didn’t have her back. They sit down and watch how Raven goes home, she tells Jason that Alex was loyal to him from the get-go and that she was extremely upset he didn’t even give her a goodbye hug. He is close to tears because he was so harsh on her. They laugh at Raven when she says that Paul had an alliance with her and Matt the whole time.

One day ago, they watch as the newest HG joins the jury house. Alex arrives and is sure they have a lot of questions; she comes in wearing the BB comic costume as they watch what happened that caused her to be evicted. Jason says he wishes he would take all his feelings back because he knows 100% that she was not involved in the backdoor. Jason points at Raven and Matt saying they were the puppet masters that ruined their game. Mark jokes that he never heard anyone call themselves a puppet master and walk away with nothing; Cody is the only one who didn’t help Paul pull strings.

The final PoV competition is set to begin. The competition will occur over several rounds, in each round they will be given an event that happened in the BB house, and using the 2 the two time dials they are to change the digits to pick the day it happened, when they have the day set, they are to hit the button; if they are incorrect they need to go back and fix it. The last player who picks the day will have power drained from their time machine. The last player remaining in the game will win the golden power of veto.

The first round begins, and Christmas finishes last, if she miscalculates 2 more times she is out of the competition. Round 2, Kevin finishes last. Round 3, Kevin loses time again with the second malfunction; he is trusting in Paul to keep him in the game. Round 4, Kevin’s time machine officially dies and he is out of the competition. He will be happier if Paul wins and hopes he will take him off the block.

Round 5, Josh and Paul get it and Christmas’ machine loses power again, once more and she is out. Round 6, Josh and Paul get it again and Christmas is eliminated. Round 7, Josh loses time in his machine for the first time. Round 8, Josh again, loses time in his machine and if he has one more miscalculation and he is out! Round 9, Paul wins by a hair and he’s won the final veto of the summer.

Paul reassures Kevin that everything is cool right now and asks if they still have the plan and Paul gives him his word that it will be him, Kevin and Christmas in the final 3. Kevin is fine with coming second but Paul is playing him for the jury vote. Kevin reminds him if its him and Christmas at the end, they will pick her; Paul worries that about making the same mistake as last year.
Its time for the veto meeting and live eviction and we shall see who is heading to the jury house. Josh stands and says congrats to the Top 4, he says he stays true to who he is and his alliance and will understand what they decide. Kevin agrees that its a tough decision and will respect any decision he has made and had a great time with them. Paul says this is the hardest decision ever and chooses not to use the power of veto and nominations stay in place.

Paul and Kevin shake hands and are given the chance to talk to Christmas before she votes. He says he is a man of his word and stayed true to his word and hopes she can respect his game play and no matter what he is happy. Kevin says he has been on the block so many times he feels like the New Kids. He tells Christmas its been a great time and whatever she decides he will respect it. He tells everyone to listen to Tim McGraw’s song, “Humble and Kind.”

Christmas faces the nominees, saying its not a personal decision, this is just game wise and needs to think about the BB game wise and chooses to vote to evict Kevin. He hugs and kisses them all, wishing them all good luck and is happy to say hi to his daughters finally. He is greeted with cheers as he exits the BB house.

Julie asks if he is surprised to be sitting there and he says no; he was great at the social game but competition wise he didn’t do very well. He isn’t surprised Paul didn’t use the veto and understands Paul did this for the game; together they watch his goodbye videos. Kevin says he will still have Josh over for Thanksgiving; he gets that they were closer and an alliance, its how the game was played.

We will see Kevin and the rest of the jury next Wednesday, September 20, 2017 when they vote on the finale for the winner. There is a special episode on Friday (tomorrow), September 15, 2017 at 8pm EST where the battle of the final HoH begins!