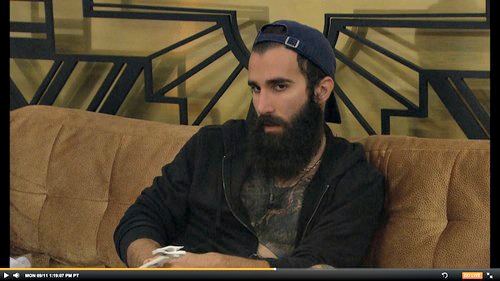 Big Brother 19 spoilers reveal a huge shocker – Paul Martinez could finish in third place.  He made one fatal mistake – he trusts Josh Martinez to take him the end over Christmas Abbott. It looks like Paul may have voted Kevin Schlehuber out a little too early.

After Kevin was evicted and sent to the Jury house, the three remaining houseguests  – Paul, Christmas, and Josh – played the first round of the final HOH competition of the summer. Paul easily won the competition, which means he will advance to round three.  Christmas and Josh will battle it out, and the winner will face off against Paul for the power to decide who to take the final two.

Big Brother 19 spoilers indicate that Paul believes that Josh will take him to the final two. His pick of who to bring to the final two is Josh, and he believes he can beat him in the jury votes.  Paul prepped Josh by saying that Christmas will try to sway him to keep her but urged him not to fall for her spiel.

A few hours later, Josh whispered to Christmas that he is keeping her if he wins the final HOH competition. He explained that if he goes against Paul, he has no chance of winning the vote. Paul has played too good of a game for him to beat him. However, Josh thinks between the two of them; it’s 50/50 on who would win the jury vote.

Big Brother 19 spoilers reveal that Josh told Christmas he doesn’t plan on telling Paul that he will cut him until the live vote is revealed.  Christmas agreed with Josh’s strategy and to tell Paul that she’s trying to campaign for him to stay.  They both think that if Paul feels safe, he might throw the final HOH to force Josh to vote Christmas out, making Paul look good and therefore garnering a critical extra vote for himself.

If Paul doesn’t gun for the win in the third round, many BB19 fans feel that he deserves to lose the season. Do you think if Josh wins round 3 of final HOH he would vote Paul out on the live season finale and take Christmas with him to the final 2?  Stick with CDL for more Big Brother 19 spoilers, news, and live feed updates!