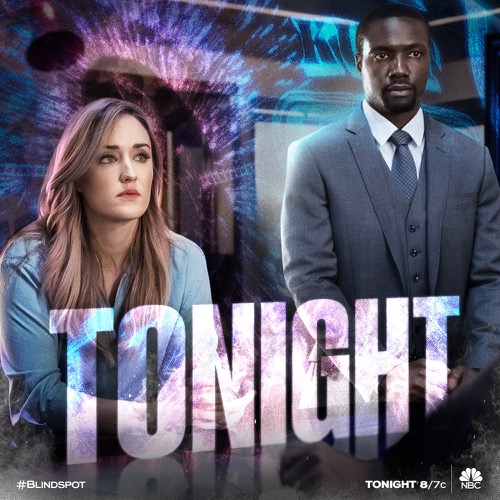 Tonight on NBC Blindspot airs with an all-new Friday, November 10, 2017, episode and we have your Blindspot recap below.  On tonight’s Blindspot season 3 episode 3, “While Jane and Weller hunt down a collective of dangerous computer hackers, Patterson and Rich Dot Com must work together to hide an explosive secret from their past.”

Roman hadn’t really changed. He had told Weller that he hadn’t wanted to be like his mother and had instead wanted to stop people from getting hurt however he was still up to something shady and neither Weller nor Jane for that matter were willing to put much stock what he said or did. But the couple carried on with investigating the new tattoos and their latest case involved a train derailment in Pennsylvania. As it turns out everyone had thought the derailment was an accident and so it wasn’t until a tattoo pointed to the case that anyone actually looked below the surface.

But what they found was a conspiracy. The derailment hadn’t been an accident at all and there was evidence pointing to a billionaire having arranged the derailment in order to make more than three hundred million in one day. So the team had been asked to get everything right on this one before it could become a class action lawsuit yet the billionaire they were investigating had a great get out of jail card. He and his lawyer said that his company had been hacked several weeks ago and that any proof the FBI found on his servers must have been planted.

So the FBI had, of course, had wanted to know why a group of hacktivist would target Loewe, but his lawyer reminded everyone that Loewe was a wealthy man and that anyone would have grievances whether they were real or imagined. But the group that had hacked Loewe had been called the Three Blind Mice. The Three Blind Mice were all about righting the wrongs and look after the little guy. Therefore, they weren’t the type of group to malicious maligned Loewe for no reason and technically they weren’t even a group anymore.

They had hoped that Electra hadn’t put the pieces together. But they weren’t entirely sure about that and so they both tried to tread lightly. They did their job when they found out Electra’s real name was Kathy Gustafson and that she worked as an IT Consultant at Nerd Herd. So they were there when Kathy was brought in and Kathy hadn’t looked like she recognized them however she also hadn’t been scared about getting questioned. Kathy freely admitted to hacking Loewe and she said she had to do so because Loewe had deleted the incriminating evidence, to begin with.

Kathy said all she did was put back his deleted emails and so she hadn’t set him up. She had realized that Loewe had short sell some stock right before the train derailment and the fact he had done so again meant he must have been planning something. But the team had no idea what Loewe would sabotage next and so Patterson went back to her hacking days. She had created a very popular game and had illegally added a backdoor that allowed her to spy on anyone that had the game on their phone. So Patterson hacked Loewe’s lawyer’s phone to find his next target.

Loewe was going to be sabotaging VoltaMotors and Paterson had needed Rich Dotcom’s help to alert her own team without letting them know too much. But they luckily arranged for an anonymous caller who alerted the team about VoltaMotors. So the team got there in time to stop the people on the scene from bombing the building and they had hoped to get Loewe as well, but it was not to be. He hadn’t arranged things himself and so the bombers only knew someone named John Smith had paid them in cash.

Except the director had told them that taking guys like Loewe down couldn’t be rushed. They were going to need time for that and so the team had all tried to take the win they could. But Patterson and Rich had both later received texts they thought the other had sent and unfortunately they ran right into a trap set by Kathy. Kathy had eventually figured out the two were her partners and so she kidnapped them to force them back into the work. She thought that the FBI had brainwashed them yet she wasn’t the person she had led them to believe.

Kathy had wanted to hack Loewe’s plane and crash it because her brother had been on the train he derailed. But Patterson and Rich couldn’t go through with that. So the two downplayed Kathy’s crazy to her until eventually their team was alerted to the danger they were in and that hadn’t taken long. What with Patterson getting a text from Weller and Kathy replying with Patterson first name as well as sending the message from an email rerouted from Antarctica. And so Patterson and Rich were both rescued in the end and their team had figured out why the two had gotten kidnapped, to begin with. Just no one bothered to put in the official file or tell Hirst.

Hirst, on the other hand, had been told that the team was going to look into the other members of the Three Blind Mice. But the team weren’t going to bother with that because they finally realized why Roman was doing what he was doing. Roman had given them new tattoos to work with because he was intent on getting the group to turn against itself. So they knew he was trying to hurt them and no one blamed themselves more for that than Jane. Jane had gotten into contact with Roman and she tried to tell him she was sorry, but he didn’t care. He wanted to destroy her life and was willing to do anything to do that.

But Stuart’s murder hadn’t been Roman! It had actually been someone missing an ear and he had gone after Stuart because Stuart had been investigating this one tattoo he couldn’t ignore!