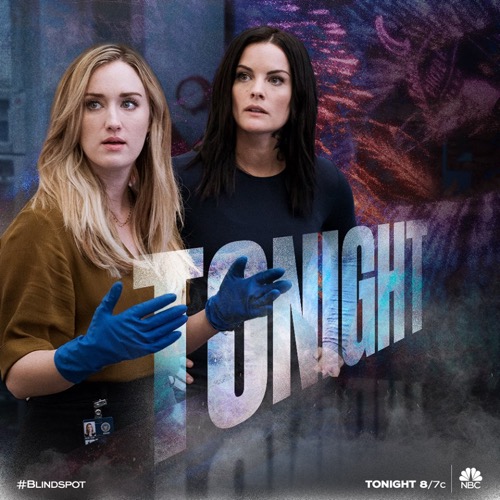 Tonight on NBC Blindspot airs with an all-new Friday, November 3, 2017, episode and we have your Blindspot recap below.  On tonight’s Blindspot season 3 episode 2, “The team battles a dangerous foreign power that is trying to hijack a satellite; and adjusts to their new dynamic and the new tattoos.”

A few things have changed since the group first broke up. They had all gone their separate ways and Patterson had even gone on to create a very popular app. But Weller hadn’t been so lucky. He had wanted/needed Jane back and has used all of his savings to find her. So Weller was in debt. He had several bills that he still needed to see to and therefore he didn’t have much to his name, however, Weller told Jane not to worry because he said they were both back at work now and that soon they’d be able to climb out of the hole.

But things at work had also changed. Reade was running things now and he didn’t want to fall back into some old patterns. So Reade had wanted Patterson to work with the new team that was in charge of identifying the tattoos and he had wanted to investigate them one step at a time rather than rush into things like before yet Weller still had his own secrets. He had met with Roman without anyone and he had been told information about a specific tattoo because Roman had wanted to stop whatever it was that was coming.

So Weller had to pretend he solved a tattoo by himself and that it was important enough to investigate right now. There had been a new tattoo that showed a location in upstate New York and combined with the old tattoo had marked a radius deemed important. But Weller had wanted to call in a team to search the radius while Reade thought they could sit on it for a while. He said there was nothing important about the tattoo that indicated an immediate threat and so Reade had had to be convinced to go ahead with an investigation. And even then he still had doubts.

Reade suspected that there was something up with Weller’s story. But when they didn’t find anything after hours of looking, Reade had wanted to fall back and Weller refused to. Weller said that it had to be important and so he waited around with Jane while everyone else was heading to the car. So together they witnessed a satellite out of the sky. It had fallen right into the radius and the words on the side matched the tattoo. It said LXT-W17, but the team hadn’t known its significance and hadn’t even gotten close to the satellite before some mercenaries showed up.

The mercenaries had shot at the team and had taken something from the satellite without anyone stopping them. But Weller had made Reade stay back. He said it was better than they survived and so they had all played it safe though afterward, they traced the satellite back to a company called ProTechSat. ProTechSat was the only one that could tell them what had been taken and so they had gone to the company expecting to get answers when all they got was a wall of silence. The two people that ran the company had said all their satellites were accounted for.

They had even looked at their system again and nothing had fallen out of the sky. But the team dragged both Nikhil and Marci back to their office just so the two could see for themselves that their satellite had crashed. So they checked their system again and found out they had been hacked. Someone had gotten into their system and destabilized it in order to steal the satellite without anyone knowing however what they stole had been a very important black box. The black box held everything on the Missile Defense Shield.

Not many know this, but the United States does have a Missile Defense Shield that protects them from the threat of a nuclear war and that particular box was the one that controlled the Missile Shield Network. Which were several satellites in space that monitored both the states and allies so that there weren’t any surprises? But they were left comprised when the black box was stolen and so there was nothing stopping an all-out war. So the team knew the black box had been stolen for either ransom or the highest price on the open market and therefore both the White House as well as the CIA had had to be notified.

It was a national issue and it turns the CIA had suspected something was up when they saw North Korea had moved a lot of their missiles. But everyone had hoped that North Korea was simply doing another field test and so Zapata had had to break the bad news to them. She said that the intel they got on North Korea had indicated that there were moving a lot more than what they needed for a mere field test. So the team knew that the North Korea had put everything in motion and that they had to stop it.

They found out the mercenaries were being led by a maned named Dwire Lee and that Jane knew him. She had worked with Dwire when they were recovering people that were kidnapped and so she sort of knew him. But Jane had gotten to know Dwire well and she knew how abused he was with Peter Luger’s. So they were able to trace Dwire’s location back to Brooklyn and they had even gotten a hold of him before he could sell off the black box. They had apparently been waiting for their employer when suddenly the guys didn’t bother showing up.

Jane asked if it was cold feet and Dwire took pleasure in telling her that they must have gotten a tip about the raid. But that meant there was a leak and so Jane and Weller worked with Reade to find out where the leak could have come from. They realized they had given everyone outside of the office a piece to the puzzle yet the only person that truly saw everything had been Nikhil and Marci. So they looked into both and brought Nikhil in when they saw it had been his keycard that accessed the computer the night the satellite fell.

But Nikhil had been at the hospital that night and he had proof. He said he gave Marci his keys so that she could watch his dogs for him and that had turned the spotlight back on Marci who did have access to Nikhil’s keycard because he left that at home. So they went looking for Marci and, with Nikhil’s help, they tracked down to a museum where she must have set up the sale for the black box. And there they had found her body. She had been murdered not long after the North Koreans got what they wanted so the team had had to track down her buyer.

They eventually found him and his people. But the FBI took them fairly easily and had stopped North Korea from getting their hands on the black box. So the White House had been relieved to hear that and the crisis was officially averted, but Jane told Weller about the money she had earned out on her own and she thought they could keep the apartment if they used it. And so they weren’t going to be homeless anytime soon.

Though while the crisis had been averted, Stuart had tried researching a specific tattoo that’s been bothering him and unfortunately someone killed him over it.