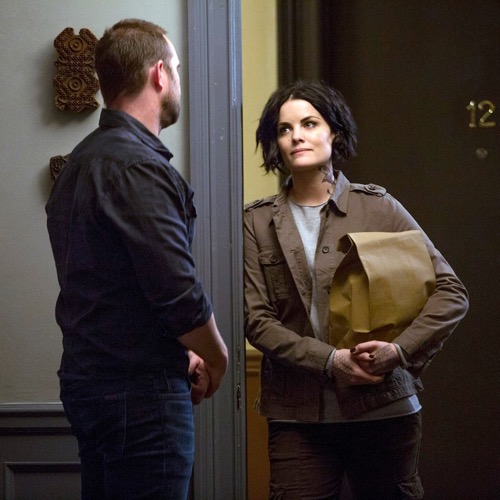 Tonight on NBC Blindspot airs with an all-new Wednesday, January 18, 2017, episode and we have your Blindspot recap below.  On tonight’s Blindspot season 2 episode 11 episode 12, “A tattoo leads back to Roman (Luke Mitchell) and it involves a biker gang with a bad reputation, but the team’s unsure if they can trust Roman enough to send him into the field undercover.”

Freddy’s girlfriend had stopped by Reade’s place. Her name was Nikki and she was apparently worried about Freddy because she suspected he was using again. But Reade had told her that he didn’t know where Freddy was and he had also claimed that Freddy was probably fine however he hadn’t told her the truth about what happened between him and Freddy and had instead told Nikki what he thought she wanted to hear. So Reade had fobbed her off and had dismissed her feelings as inconsequential. And unfortunately, he wasn’t the only one that was pretending he was doing thinking of someone else’s feelings meanwhile he was actually doing something out of self-interest.

Jane had also pretended that she had Roman’s best interest at heart when in fact she had wanted to her brother to be her brother again and was willing to threaten his mental health to get that bond back. However, Jane had convinced the others that they should push Roman into remembering after she and Anderson figured out her leopard tattoo. Jane and Anderson had found out that Roman was had a connection to tattoo and that he was unconsciously deciphering it without knowing. So they had tracked what he was doing and that’s when they learned the hidden code in the tattoo had led to evidence that Roman being involved with the Viper Kings.

The Viper Kings were a notorious biker gang and they dealt in explosives and illegal gun running. So everyone at the bureau had wanted to know if the Viper Kings were connected to phase two of Shepherd’s plan. Though the bureau had also been warned against pushing Roman. Dr. Sun had said that his memories could trigger anti-social behavior and so forcing him to remember was a gamble on their part yet thankfully they brought back Sun to handle Roman. Sun had known had to calmly trigger his memories as best as she could and she got him to remember a few things. Like how he knew Kat Jarrett from Viper and had grown close to her.

Yet, Jane had put an end to that relationship. Jane had once been the one that Roman listened to above everyone else and she had told him to forget his feelings for Kat because they had a mission to finish. So Roman had known how to get into contact with the head of Viper Kings because of his situation with Kat and Jane had wanted to use that albeit out in the field. Jane had asked that Roman be allowed to go with her to meet up with the Viper Kings and, with come convincing, Roman was finally allowed back outside, but Jane had been warned about her brother. Kurt had told her that Roman had been trained to lie and manipulate. And so he didn’t think Roman should be trusted.

Only Jane felt differently. She thought that her brother would never hurt her and she refused to take Kurt’s warning seriously. But her brother had later surprised her on their mission. They had met up with Kat and had gotten her to reintroduce them to Abel who was the one running things however Roman had asked for Abel’s help in taking down Shepherd and had even offered an incentive. Roman had been told that Shepherd would only come out of hiding for HMX explosives so Roman had said that he and his sister could get their hands on the military grade weapons. So Roman hadn’t exactly followed the plan he and Jane had agreed to and that had worried Jane.

Jane had wondered if her brother was going too far for the mission though she had still wanted to trust him and so he had talked the others into following the new plan. However, arranging for HMX weapons had put some of the agents on guard. They hadn’t wanted to trust either the Kings or Roman with explosives. So they had agreed in the end to the new plan that Roman had come up with because they had desperately wanted to watch Shepherd once and for all. And so Kurt and Reade had acted like they were mere drivers and they had driven the truck with the explosives to the point where they were supposed to meet up with Jane and Roman.

Jane and Roman on the other hand had been surrounded by the Viper Kings when they had “forced” the truck to the side of the road and commandeered the truck. So the duo had had to shoot the drivers as proof of their loyalty seeing as the drivers had seen their faces yet Jane had tried to talk the Kings out of it. She hadn’t wanted to shoot her friends and so she had tried everything she could to get the Kings to back down. Though Roman knew what they had to do and he hadn’t hesitated shooting Reade and Weller. And the agents had simply had to hope that Roman knew all along that they had been wearing vests.

Yet, Jane had watched as Roman more and more about his relationship with Shepherd. So she had realized that he was in love and had been scared that he would do anything for Kat, but Roman had wanted to finish the mission fast because he had wanted a future with the biker and had thought that Shepherd was standing in the way of that. Therefore, he had carried on with the mission and on the day of the sale he and Jane had walked into a trap. Roman’s apparently new affection for public display had made Kat question who he was working for and so she had tricked Roman and Jane into believing the meeting place was at the Kings’s bar.

Roman however hadn’t been afraid to tell Kat that he was working for the FBI because he said that the agents didn’t want the Kings and had actually wanted Shepherd. So Roman had told Kat that they could still have that future together once everything else was done and so she had faked his and Jane’s death for the other bikers. But when the others tried to dispose of the bodies, Jane and Roman rose from the dead and gave the bikers a good if not loud fight. In fact, they had been so loud fighting off the bikers with no weapons that the guys out front had heard them and Kat had found herself in a shoot-out by herself.

So Kat had gotten injured in the time it took for Roman to reach her and the agents to move in though her death hadn’t impacted Roman. He had somehow quickly gotten over it and had focused on trying to capture Shepherd. He said he had wanted to know why Shepherd had erased his memories. However, Jane had chosen to ignore the opportunity to tell Roman the truth and ultimately Shepherd still managed to get away with the explosives. And so Roman hadn’t gotten the answers he wanted and all he could do was rely on his sister. He had wanted to know if he had really loved Kat back then because he couldn’t remember his feelings about her.

Jane though had told him that feelings have to be earned and so she told him that she did think he had loved Kate before. Yet, she had told her brother that it was probably best to figure out the man he was now rather than try to remember the man he used to be. So Jane had later stopped by Weller’s place because she had wondered if her brother could be let out sometimes or at least given a room with a window and he had told her that he would think about it. And so Jane was looking through some of the stuff that Weller had out afterwards and she found his military academy year book with both a picture of him and Shepherd in the background.

And so neither of them knew what that meant, but they did know that couldn’t be anything good and that could also the moment Reade had gotten too involved with Freddy’s girlfriend Nikki.