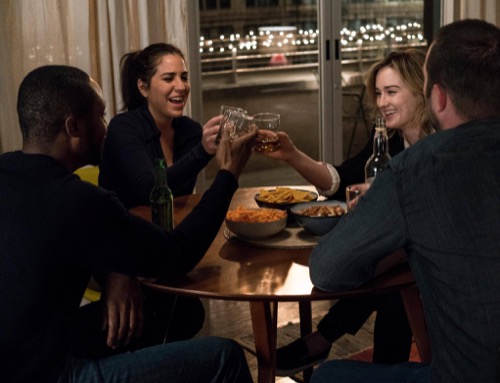 Tonight on NBC Blindspot airs with an all-new Friday, December 1, 2017, episode and we have your Blindspot recap below.  On tonight’s Blindspot season 3 episode 5, “This Profound Legacy,” as per the NBC synopsis, “While Jane (Jaime Alexander) struggles to cope with a secret from her past, the team races to prevent an international crisis.”

Patterson checked everything out. However, the birth certificate was real and that meant Jane had a daughter out there somewhere though Jane herself had a hard time accepting that. She hadn’t wanted to believe that she could give birth and not remember it because the person she was now wouldn’t have forgotten something like that so easily.

So Jane had tried to find some means of further verifying the evidence and unfortunately she kept hitting a brick wall. She couldn’t take a test that would determine whether or not she gave birth and the one person that was there when she gave birth had coincidentally died five years ago.

Though Patterson tested everything and she said that none of it had been a forgery. So Patterson believed there was a child out there that was part Jane, but they had no way of finding her and everyone could see how much the news was affecting Jane. Jane had thought she finally figured out who she was and this revelation just proved how wrong she had been about herself.

She had been ruthless, willing to do anything for Shepherd, and practically a stranger to the woman Jane had become. And so Jane had a hard time processing everything that had happened and she hadn’t been at her best when a new tattoo was revealed.

The tattoo had been a bunch of numbers on Jane’s spine yet it turns out those same numbers belonged to a evidence box in one of NYPD’s warehouse and that there had been no information indicating what could be in that box. Patterson had said that it could be anything from a cocaine to confiscated weapons.

But she did know that the box itself had been twenty years old and so both Jane and Weller went to go check it out for themselves. So they had gone there expecting to find files and what they came across were a group set on burning the building down. And so Jane and Weller had to fight to save the evidence of thousands of cases.

They had gotten shot at and had almost gotten caught in the fire. Yet, they managed to stop the group and save the building all the while grabbing they could later interrogate. So Jane and Weller had called the incident in and they found out that three other NYPD warehouses had gone up in flame however that could only make sense if someone was attempting to hide a certain evidence box and that meant that whatever was in it was important enough to destroy. And so Jane and Weller opened up their evidence box and they found a bunch of rape kits. Kits that were almost twenty years old and that had never been tested.

So that had upset Jane. She had wanted to know why the kits had never been tested and had found out through Zappata that units like vice and homicide get priority over sex crimes because rape had been deemed unimportant. However, things were changing and just last week there had been a law put into effect that demanded all rape kits be tested, but the warehouse had all been bombed to keep one rapist from ever being exposed and so Patterson ran tests on all the kits in the evidence box from Jane’s tattoo. And she found one serial that had raped two women twenty years ago and who would be important/wealth enough to order the fire bombs.

Two of the rape kits matched King Ivan of Kazharus. The CIA had taken a sample of his DNA when he had had surgery in the states and so the team knew for a fact that he had raped two women – Jessica and Yasmin. But Ivan had died not that long ago and so the rape kits were only important to his brother King Cyrus.

Cyrus had become king upon Ivan’s death because the succession deepened on proximity though the rape kits proved that Yasmin had had contact with Ivan and only Ivan could be the father of the child she had nine months after the rape. So the team found out they were dealing with a succession crisis and so they had to call someone in from Foreign Affairs.

The United States were an ally of Kazharus and so their old friend Congressman Weitz stopped by to represent Foreign Affairs. Though what Weitz had to say hadn’t been good. He told them about King Cyrus and how he was more or less a war criminal that used sarin gas on his own people. So that told the team that Cyrus wouldn’t care about casualties or insulting the US by killing an American citizen on their soil as long as he manages to kill his nephew. His nephew on the other hand had gone on the run with his mother because people had gotten too close to killing his mom and so Vanya should have stayed under the radar for his own safety.

Yet, he was a kid and had done something stupid like post a video of himself saying goodbye from the hotel. So Patterson used the background image to find out which hotel they were staying in and then sent Jane and Weller to go collect the two, but Jane and Weller had had to convince Vanya that they weren’t like the other man that wanted to hurt him and they were able to talk him down by telling him they could get help for his mother. Yasmin had gotten shot and was bleeding out badly. And so Vanya agreed to go with them and they took Yasmin to the hospital under federal protection to ensure she would make it through surgery alright.

Only surgery wasn’t the problem. It was the hospital itself because somehow it was leaked that Yasmin and Vanya were there and so mercenaries showed up at the hospital before long. But Jane and Weller got the two out of the hospital and fought their way into bringing them back to the FBI. So Vanya and Yasmin had found themselves safe and unfortunately a sudden death changed everything. The team had found out that King Cyrus had been found hanging from a rope and that the death caused the absolute monarchy to destabilize. And so the country’s elites and military demanded Vanya over because they needed a king ago.

So everyone had been upset about that and how unfair it was to Vanya to ask him to become king. However, nothing good could come out of his refusal. The country would only get worse and the military would move to pushing the Americans out of their country because they would claim their heir was being held against his will. Therefore, the decision was put to Vanya and he decided to go. He said there was a lot of good he could do there and that he could help the people after everything they had been through. And so he decided to go and seeing him find out about where he came from and having to deal with it – Jane decided not to look for her daughter.

She had had a conversation with Roman and Roman told her that their mother had taken the baby away from Jane because she hadn’t wanted to be a grandmother. Though Jane blamed herself for not fighting to keep the baby and for running off to the military to forget what happened. So she told Weller that maybe it was best that her daughter never knew about her and Weller chose to miss the opportunity to tell her that he already met her daughter. They had been looking for Jane at the same time and so he knew all about Avery and Avery knew all about Jane, but Weller chose to sit on that information and he wasn’t the only one hiding stuff.

Patterson and Zapata’s secret investigation had led them to Hirst and so they tried to tell Reade about her yet he hadn’t wanted to hear it.