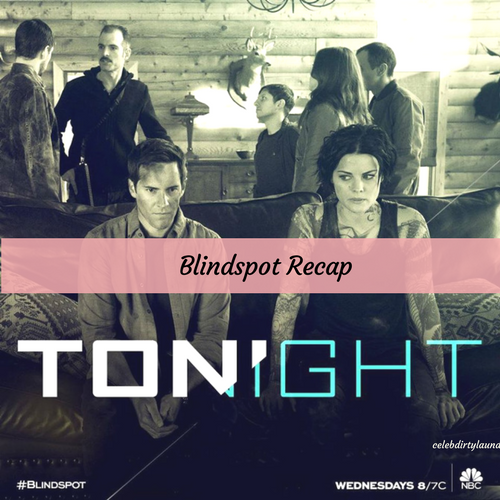 Tonight on NBC Blindspot airs with an all-new Wednesday, March 30, 2017, episode and we have your Blindspot recap below.  On tonight’s Blindspot season 2 episode 17, “Jane (Jaimie Alexander) and Oliver get into a dangerous situation, which exposes the secrets they’ve both been keeping as they remain uncertain about whether they can trust each other. Meanwhile, Weller and the team race to save them.”

Jane was in trouble. Last week when she had apparently been at her apartment and was in the middle of making things up to her boyfriend Oliver there had been armed guards that crashed through her door though they didn’t kill her and instead settled on kidnapping on her. However, Jane’s kidnappers hadn’t been satisfied with just taking her. They had also kidnapped Oliver. Oliver who had seemed so sweet and carefree. So Jane had initially believed that they had gotten kidnapped because of her and it turns out the kidnapping had nothing to do with her.

The kidnapping had actually been about Oliver. Oliver’s real name was Oliver Steele and not Oliver Kind, but he had changed it after his father had stolen money from their clients and fled the country. So Oliver had talked to Jane about everything. He told he that he had gone to work at the family firm after college and that he had noticed a discrepancy that his father couldn’t explain. Though Oliver also admitted his mistakes. He told Jane that he had given his father an ultimatum and had asked his father to come clean of his own volition. And that his father chose to flee.

But Oliver didn’t want to be associated with what his father did and so he had wanted to start over. He changed his name and started to work with a charity yet the kidnappers had taken him and Jane because they wanted Oliver to do something for them. They had wanted him to make a video for his own father in which he admits his father’s guilt and asks his father to pay back the two hundred million or he and his girlfriend die. So Jane had tried to fight her way out of this situation and she couldn’t.

There were simply too many guards and they became wise to how dangerous Jane was after her attempted escape. Yet, they got Oliver to make the video like they wanted by threatening to hurt Jane. So Oliver made the public plea towards his father and then he had found out that he wasn’t the only one that had gotten taken because his father’s business partner Edith had also had her own in the theft. And so Edith Kananack’s children had also been kidnapped however whoever paid up the ransom would get their children back while the other watched their child died.

So when the FBI found out was going on, they had realized that they had to rescue four people rather than just the two. However, they prioritized Edith’s family. They knew that they could track Edith and her ex-husband’s motives so they waited until the grandmother led them to Edith though Edit had had some troubling news. She said that they were never going to reach Oliver’s father because Magnus Steele died in Switzerland. And so there was no way that the FBI could bring the man to help save Jane.

Except Jane had come up with her own plan. She and Oliver had checked out the perimeter and they had played a trick hoping it would reveal where the other kidnaped victims were. So the two found out that the kids were being held at Whiteshore before anyone else and they did something about it. Jane had pretended to call Oliver’s father and she used the key words to flag down the FBI and then told them to rescue the kids first. Though Roman hadn’t liked that plan. He thought that the feds should save his sister at the same time because he didn’t want to risk her, but Weller promised.

Weller told Roman that they would also save Jane and so that calmed Roman down. But Nas thought that Roman was too fragile to know everything. She told Weller that the stress wouldn’t be good for Roman and she had been right. Roman grew agitated and confrontational yet Nas had tried talking to him directly and he had wanted to talk to her. He said that he knew that she was checking up on him and that all he wanted to hear was that his sister had been found. So Nas left him be and she went kept an eye on things as Weller went to save the kids.

Yet, Weller did Edith’s children to safety that had triggered the alarm for the other set of people that were holding Jane and Oliver. So Jane had tried to chaos and fear to her advantage by making a run for it with Oliver however they had gotten caught before they could get out of the door and the man in charge had wanted to punish them for trying to escape. Herman had told the couple about how he had lost his daughter Jessica because of what Magnus did and that he wanted to Magus to hurt as much as he did. And so he had turned his gun on Oliver.

Herman had realized that Magnus wasn’t paying up or even bothering to contact them. So he thought that they should just kill Oliver though Jane had talked Herman out of that decision. She told him that wasn’t what his daughter would have wanted and that he could still let them go without anyone else getting hurt. However, Herman wasn’t the only one making decisions and his team turned on him when he tried to free Jane and Oliver because they had been promised eighty million and still wanted their money.

So Oliver offered to steal from his own charity and that meant going back into the city, but the feds had caught up to them in time and the duo hadn’t been so bad at defending themselves. Though once everything was over, reality kicked. Jane had sadly gotten dumped by her boyfriend because he couldn’t handle the fact she worked for the FBI. And Reade had quit the FBI because he hadn’t wanted to give up on drugs and alcohol despite everything that Weller tried to do for him.

And while Roman had finally been allowed house arrest in order to be with his sister, his sister along with everyone else had gotten served papers for aiding and abating a terrorist unit.