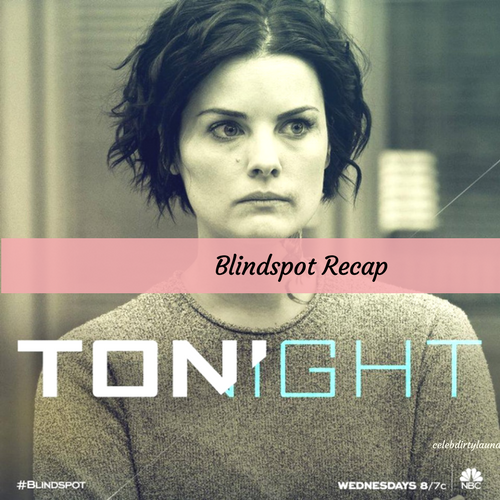 Tonight on NBC Blindspot airs with an all-new Wednesday, April 5, 2017, episode and we have your Blindspot recap below.  On tonight’s Blindspot season 2 episode 18, “A mysterious death at a foster home comes onto the team’s radar because of a tattoo. Meanwhile, the team struggles to defend itself when it’s under investigation by an old rival.”

Roman was still trying to adapt to his new life. But Jane told him that one day everything would return to normal and that day didn’t seem like it was getting any closer now that the unit was under investigation. So Weller later called a meeting with everyone that had been subpoenaed. He had wanted to talk to about what could be behind the subpoena and so several of them had suggestions however they were mostly upset because they wondered how anyone would believe they could be assisting Sandstorm.

The team knew that they had done everything in their power to take down the shadowy organization and that he had lost loved ones along the way because of it. However, their team was threatened and that made Tasha question the paperwork. She had told the others that the FBI could be on a fishing expedition and that the threat of treason could just be a way for their bosses to figure out everything. So that had made Jane a little nervous. She knew that Sandstorm was mostly connected to her and her family so she didn’t want anyone believing she was a traitor.

Yet, Matthew Weitz later showed up at their offices and he began questioning everyone. He had let on that he thought the team was reckless and could have taken down Sandstorm months ago if they hadn’t gotten in their own way, but Weitz’s appearance was interfering with their investigation. The team had found a new lead when a tattoo on Jane that led to a nonprofit organization was revealed to be connected to a foster home. So what the foster home so interested had been the fact that one of the children had recently been murdered while the others were missing.

The six other children had went missing within moments after Amber’s death and it appeared that their foster mother had runaway with them. But what the team had wanted to know was where was the connection. Amber was a troubled teenager that believed the devil was chasing her yet that had no bearings on Jane or an imminent threat. So even as they were searching for the missing children, they questioned why Sandstorm would point them towards that nonprofit. And so Jane had played fast and loose with what was going on to get Roman out of the office.

Jane had said that Roman grew up in foster home and that being part of the latest investigation could trigger another memory. Yet, Weller and others had thought it was pretty much a stretch and so they hadn’t felt entirely comfortable with allowing Roman out again. Roman still needed help after all and he was at risk of running away if he felt rudderless. So Weller only signed off on working with him again if his minders stayed with him and he does as Weller commanded though Roman as it turns out was a lot a help.

Roman had been with the team when they found Eli who had been a foster child at his teacher’s house and he had understood Eli better than anyone. Roman had seen for himself that Eli didn’t have it in him to kill his foster sister and he had also told the team that the kid was clearly afraid of someone rather than himself. So Roman talked Weller into giving the kid back his keepsake that he had taken from the foster home and that had gotten Eli talking. Eli told them that he and the others were giving pills that their foster mother said were vitamins.

The “vitamins” eventually began to make them sick and it had even caused Amber to believe the devil was after her. But Amber killed herself when it got to be too much. So Eli believed that there was something off with those pills and that the doctor that would occasionally visit them had another agenda though Patterson looked into that and she had found out the foster mother was receiving offshore money which didn’t mean anything good for the kids. The kids were apparently being used as test subjects in order to fast track a drug.

Drugs are notoriously hard to pass through with all the federal regulations. Though someone had figured out that they could get around those pesky regulations by using children in the system. So right away the team realized they had to rescue those children because the kids were the only evidence against the people pushing the drug however Amber’s body had been stolen from the morgue and so their only leverage was Eli. Eli was told to call the doctor and keep him Dr. S talking long enough for the feds to trace the call.

However, the team traced the call to a warehouse out of the way and so by time they got there the foster mother had told them that it was already too later. She had read to the keys to get them comfortable while the drugs were pushed out of their system and she had left before she had to witness what happened to them. So Carol had genuinely thought they died the second she left them, but she had thankfully been wrong. The children were later found alive and Roman had safe-guarded them while the others were able to arrest the collaborators.

So the children were taken to the hospital to be evaluated when Tasha noticed that Eli had disappeared and they went looking for him. But Weller found Eli before Eli could kill his former foster mother so they were able to save the teenager from committing a grave mistake however the situation got Weller thinking. Weller realized that Weitz was committed in wanting to drag them before congress and he knew that he couldn’t let that happen. So Weller had planned on going to Weitz and taking fault for everything.

Weller would have claimed that he was dragging down the team and that all of their problems could be laid at his door. However, Nas knew that there wasn’t a team without Weller so she went behind his back and took the blame instead. She told Weitz that she was the reason several agents were dead and that no one else hampered their efforts. So Nas threw herself on the sword and Weitz knew what she was doing yet he agreed to take Nas’s confession because he knew that it would make him look good.

And so Nas got the AUSA to back off and that stopped Weitz from finding out that Reade had a drug problem, but Reade had finally talked about the video he had found with his name on it at his former’s coach house and that seemed to have helped him because he called Tasha in the end to watch the video with him. So now the only problem remains Shepherd and stopping her from reaching phase two – whatever that is