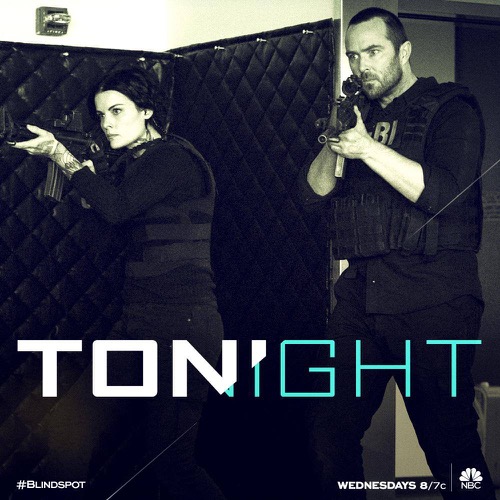 Tonight on NBC Blindspot airs with an all-new Wednesday, May 10, 2017, episode and we have your Blindspot recap below.  On tonight’s Blindspot season 2 episode 21, “The team finally crack a member of Sandstorm, which leads to a huge breakthrough in uncovering Phase Two of Sandstorm’s plan.”

Roman’s memory coming back wasn’t a good thing. Over time, he had started to remember things like some of the atrocities he committed and that hurt his relationships with the team as well as made him question what type of person he was however Roman had trusted Jane when she said that he was a good person underneath all and so it had been rude a awakening when he finally remembered that Jane had been the one that drugged him. But Jane had tried to reason with him afterwards and tell him that she was just trying to help. So once he was done trying to kill her he had wanted to tell Jane what he thought about her.

Roman had apparently lost it when he learned the truth and he didn’t take it well when he had gotten placed back in his cell. However, the one thing he did have control of was his anger. He called Jane manipulative and thought she was ungrateful seeing as he had saved her life when Shepherd wanted her dead though the one thing that Roman was sure about was that Jane hadn’t erased his memory for him. She had done it for herself because she had wanted to take down Shepherd and knew he was her best chance. So Roman was done with adoring his sister. He felt that she deserved everything that came next.

Though he hadn’t expected that Jane would get him into trouble again. She had seemingly struck up conversation later with the Director and she had found out that he wanted to end the Jane Doe program yet she knew that she couldn’t let him do that. At least not when they were so close to finding Shepherd. So she told the Director about their latest breakthrough. She said that Roman’s memory was slowing coming back and that in time he could remember everything. Including what Phase Two was and whatever Shepherd’s end game happened to be. And therefore, the Director had taken what she said in consideration and then he thought it was best to transfer Roman.

He wanted to transfer Roman to a black site run by the CIA and it was clear that he thought they would be able to break Roman eventually. So Jane managed to get Roman into even more trouble and Weller hadn’t thought that there was anything they could do about it. He had tried to shut Jane down when she was talking and she had spoken over him because she had wanted to desperately keep Roman out of jail. Yet, it all backfired and there was no escaping from what she did. Roman was being moved and she thought she wouldn’t able to say goodbye to him because he was still refusing to see her.

So Jane had followed what she thought was their latest lead. She and Weller were told about a site that Shepherd was using and they had gone there expecting to lean something about her grand plan however they found a replica office building that matched the New York Office down to a tee. But just as they realized that Shepherd was planning something at their office, they got cut off from Patterson and the rest of their team found themselves facing Shepherd. Shepherd had used the decoy office to make the bureau she was already inside and so they unknowingly opened the doors to her. And she was able to wreak havoc.

Shepherd immediately took over the building and she had even got some her new hostages to open the rest of the doors. However, Patterson found a way to stall her by rebooting the whole system which cost Shepherd time she didn’t have. So Shepherd put a newly released Parker onto cracking the system and she tried to secure the building from outsiders though first she went down to the cells to speak to Roman. Roman remembered his relationship with his mother and so he hadn’t been surprise to see her after hearing not but gunshots from upstairs. So Shepherd gave him an option.

She told him that she could leave him in his cell or that he could rejoin her for Phase Two. So he agreed to go back onto her side in order to be released yet he hesitated on wanting to kill everyone that stood in their way. Like Jane and Weller. The two had managed to get back into the building and they even found the bomb that Shepherd placed. So they posed as a threat to her plan and she wanted to eliminate them just as much as she wanted to get rid of Patterson. Patterson, Reade, and Tasha had made it to the server room and they wanted to shut the whole system down to stop Shepherd from communicating with her team.

Yet, destroying all possible avenues for Shepherd only made her throw everything at the problem until she had no other cards to play. So the team were able to destroy Shepherd’s hit squad before she made her escape, but not without casualties. The Director was killed and Tasha was seriously wounded. So Shepherd did get some payback and she took something valuable. She took Roman with her and she had convinced to finally turn on Jane because she was his mother and claimed to truly love him. Her love on the other hand was just as controlling as Jane’s. She later made a video with Roman’s help in which she called other rebels to arms. And so her plan wasn’t over.

She had merely a setback and was coming up with a new plan to achieve her means. But she still had to go through Weller. Weller had been there for Jane after she lost Roman and he had finally got the nerve to kiss her however he hadn’t been able to fully tell Jane how he felt because some men in black showed up. So Weller ended up going to a bunker with several other deputies and he realized that Shepherd’s plan wasn’t over once he figured out that everyone in the bunker (everyone that was now in control of some government agency) had all been placed in their positions because that’s where Shepherd wanted them to be.