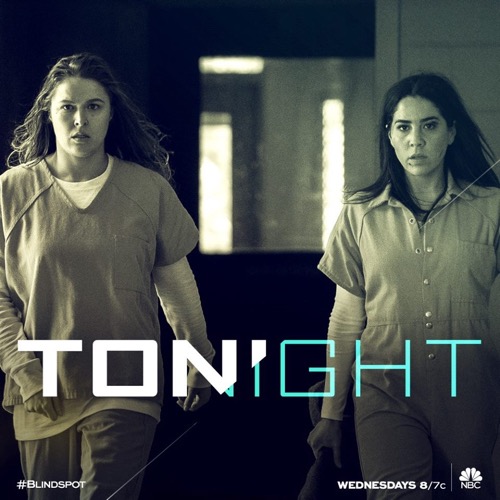 Tonight on NBC Blindspot airs with an all-new Wednesday, May 3, 2017, episode and we have your Blindspot recap below.  On tonight’s Blindspot season 2 episode 20, “Zapata’s transgressions catch up to her, sending her to jail alongside a powerful Sandstorm asset named Devon. As a result, Weller and the team go to exceptional lengths to help out Zapata.”

Roman felt guilty. He knew that Weller trusts him now and so he wanted to tell him about Emma Shaw however Jane said it wasn’t the right time on tonight’s all new episode of “Blindspot” because she thought that it would undo all the good Roman did. But Roman felt that was exactly he should tell the truth. He felt that Weller needed to be repaid for all the things he did for him and so he couldn’t lie to him anymore. And more importantly Roman didn’t want Jane to continue to lie for him anymore.

However, there never seemed to be a right time for Jane to tell Weller everything. She had tried talking to him about this before and had clammed up without saying anything important. So Jane hadn’t really wanted to tell Weller the truth yet an opening did show itself. She had been talking to Weller about Roman and how he doesn’t really go out into the world when Weller said that the two of them could come over for dinner. He said that he was making his famous curry and that Roman could use a night out.

So Jane had agreed to the dinner. Yet, she had also been worried about what would happen and that had easily been shown on her face although Weller didn’t see it because he was worried about Zappata. Zappata went to prison on an undercover mission to investigate a possible lead on Shepherd and she wasn’t doing so well. She has gotten into a fight on her first day in there and that led to the beginnings of a grudge. And so Zappata found herself frequently targeted on the inside by this gang.

The gang was apparently led by one woman, Liz, and she didn’t like it when people stood up to her. Although, Zappata didn’t know what she started until it was almost too late. She could ignore the bed fire and even the bruises, but when Devon was stabbed that’s when her situation suddenly become a lot more dangerous. So Zappata reached out to her team on burner cell and she told them that they had to get Devon out of prison. They had figured out that she was the girlfriend of one of Shepherd’s confidantes and so they wanted to use her to track her boyfriend down.

Only Weller and Zappata had different ideas about how to get Devon out. Weller had wanted to go through legal channels to grant Devon an early release however Zappata said that would be too suspicious and so she came up with another idea. She thought that they should “break” Devon out of prison because Devon’s first stop would be her boyfriend’s. But the plan was risky and not everything was ok back at the office. Jane had finally given in and had told Weller the truth except she mentioned everything. Like how Roman told her weeks ago and she sat on the information.

So Weller had been furious when he heard Jane’s confession. He thought that she kept what Roman did to herself to protect him and so Weller believed that Jane said nothing because she had wanted to manipulate him into freeing her brother. However, Jane had tried to say she was sorry and that she had actually been protecting Weller because she knew he would get hurt yet he didn’t believe her and he had just gotten upset with her. He had also paid Roman a visit while Roman was working out and he nearly killed him with the weights.

Yet, common sense did kick in and Weller stopped himself before he could actual go through with killing Roman. So all Weller wanted in return were answers. He wanted to know if Emma suffered and a part of him also wanted if Roman felt guilty – he did! Roman kept apologizing for what he did and he said that he wished he had his memory back because he would have liked to know why he did what he did though, despite that perfect opportunity say something against Jane, Weller just walked away.

He was angry, but he didn’t want to come between Jane and Roman and so he kept her secret. Though he held onto his anger even as they were out in the field. Weller and Jane had gone ahead with Zappata’s plan and surprisingly they managed to get her and Devon out without a lot of problems. So the plan was to get Devon to lower her guard, make her call her boyfriend which was what she did, and the last step was to set a trap for said boyfriend. And so no one was expecting that the two would speak in code.

They said they would meet at the deli and what they truly meant was an abandoned warehouse. So there was no backup when Zappata got made by Parker. He instantly recalled that she was a federal agent and he took her hostage because he thought that he could use her to get to Weller. But neither Weller nor Jane made that easy. They had gone to the warehouse where they got a signal from Zappata’s phone and they had come armed so they were able to overwhelm Devon and Parker. And they took them both in.

However, Parker refused to say anything about Shepherd and Zappata later told Reade that maybe they should unconventional methods to get what they want. So Zappata was going off the rails and she wasn’t the only one. Patterson had also lost her cool except she had done so at the office and that put her back in therapy. And so the team was falling apart and Weller wasn’t going any better once he learned the truth about Emma Shaw yet Jane thought that they everything would improve and so she had gone home not expecting problems.

And unfortunately for her, Roman remembered that it was Jane that erased his memory.