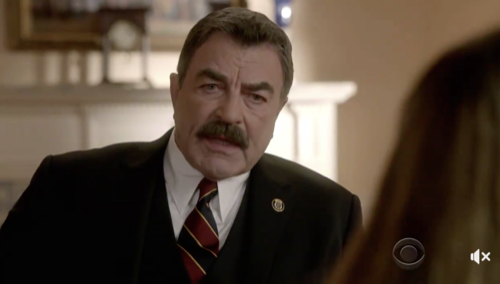 Tonight on CBS their hit drama starring Tom Selleck Blue Bloods airs with an all-new Friday, September 29, 2017, episode and we have your Blue Bloods recap below. On tonight’s Blue Blood Season 8 episode 1 premiere, as per the CBS synopsis, “Season 8 begins with Danny contemplating retirement until Erin enlists him to help her with a case involving her ex-husband. Meanwhile, Jamie and Eddie go undercover as a couple; and Frank butts heads with the new mayor of New York City.”

A shooting changes things! Frank had done his due diligence as police commissioner and had found out everything he needed to know. He learned an officer had shot an unarmed woman however that woman had record and the officer had never discharged his weapon before the incident. But as Frank was going through everything he found during a press briefing, the new Mayor had decided to interrupt him because she simply could not stay away. Madam Mayor had previously worked as an advocate and therefore she still believed it was part of her job to advocate even if there was nothing to advocate for.

The Mayor had gone in front of the cameras and had announced a special investigation into the police officer’s conduct. However, she right away made it seem like the officer’s fault and that had grated on Frank. Frank knew that the officer in question had unblemished record at the department and that the victim had been in the middle of shoplifting when she assaulted an officer. So Frank tried to remind the new Mayor of that and had found himself being dismissed. The new Mayor said that the woman’s record shouldn’t be brought into question and had wanted to discuss the officer.

She told Frank that he should release the police officer’s record to the public. Though Frank didn’t like that. He thought it was pandering to everyone that wanted to paint the officer as the criminal and so he told the Mayor “no”, but she refused to accept that answer and had fired Frank because he refused to follow orders. So Frank willing accepted her judgement. He looked for jobs for his people so that they still had employment and was in the middle of packing up his stuff when Moore told him that the Mayor couldn’t technically fire him.

Moore said that she was acting Mayor and that she didn’t the full powers of the seat. But Frank didn’t care. He still wanted to pack up his stuff because he was tired of fighting and so it was only his people that were disgruntled. They had wanted Frank to fight and couldn’t understand why he wasn’t doing exactly that. So they tried pushing him and just wasn’t working because Frank had mentally checked out just as much as Danny. Danny had lost almost everything and so he wanted to hand in his papers as well.

Danny had lost his house and his wife, Linda. Linda had died after an emergency helicopter she was on had crashed. Yet, Danny had blamed himself for her death because he knew that she wouldn’t be working late if he hadn’t pulled a late shift the time before. So Danny has tried therapy and his family have tried to be as supportive as they could however he had grown suspicious when Erin said she needed his help because he thought he thought it was a ruse and proved to be something much bigger than that.

Erin had wanted her brother’s help because she thought something was wrong with her ex-husband Jack. Jack hadn’t showed up to lunch like he said he would and Erin knew that wasn’t like him. However, it took some time to convince her brother to go with her and so when the two eventually arrived at Jack’s door they had then found Jack on the floor. Jack had been bleeding from a stab wound and no one knew how long he had been bleeding out or who was the last person that saw him. So Erin went with Jack to the hospital while Danny gave the crime scene a look-over.

Danny had just wanted to stay there until the Homicide team arrived to take over though Baez couldn’t help poking around and so she found Jack’s schedule. It said that he was meeting Dr. W and neither of them knew who that was. But Jack’s secretary who had been working on something had confirmed to them that Dr. W was Dr. Webber. So that did get Danny interested in the case and he decided to work with it with Baez because they both wanted to catch Webber. Webber had confessed to murder and had gotten off thanks to Jack.

Jack had had to face Erin in court for that, but whatever happened had changed Jack’s personal viewer about his client. He had told his secretary that he would never work for Webber again and so it made no sense for him to meet with Webber. Though Danny and Baez didn’t know why Jack felt that way and so he had gone to see his sister. Erin had the best chance of knowing of why and Danny’s guess hadn’t been wrong. His sister did have an idea. She said she talked to Jack about Webber because she found out Webber had had another girlfriend that went missing five years ago.

Which means Webber could have another victim out there! Yet, Erin said that Jack had wanted to tell her something before he had gotten stabbed and that she never found out what it was about. So Danny had gone to see Webber and Webber had pushed his buttons. He had mentioned May 28th and that had been trigger for Danny, but attacking Webber hadn’t gotten him anywhere and he had been forced to discuss what it meant to his therapist. His therapist had advised him to think about what Linda would want for him and that was really hard for Danny.

Danny hadn’t wanted to think about how much it hurts with his wife gone and so he avoided subject like he avoided his kids. But he worked the case. Danny had gone to the last place Webber had been seen with his girlfriend and he had found the girlfriend’s corpse in a secret room. So Danny and Baez had found evidence that would put Webber away however Danny then had to make a decision. He wanted to quit and no one in his family thought that would be healthy for him. Frank had talked to his father about it and he said that Danny was most like him out of all of his children.

Frank had also locked himself away after his wife died and the only way for him to get through was for him to find a purpose. Frank had made his kids his purpose though he wasn’t sure about the job. He thought that he might be a little burned out and figured he should leave the job when he learned that the police officer involved in the incident had quit because of how much the media had hounded him. However, the Mayor ended up calling Frank in. She had wanted to apologize for wanting to investigate the police officer.

The Mayor had found out the woman had been high on drugs and couldn’t be reasoned with. Though the reason she called in Frank was because she wanted to apologize for how she treated him and tell him that she couldn’t technically fire him. So she asked Frank if he wanted his job and Frank said he would only stay on if he was wanted, but he put the decision up to the Mayor and it was now her turn to figure out if she could work with him rather than against him. And so Frank had made his decision he knew that he could Danny with his.

Frank and the others had all rented a place for Danny because they knew he needed help moving on and so Frank had also talked about his own experiences. Like how hard it had been for him when he buried Mary. So whatever decision Danny makes has to be one that fits him and Erin told her brother that quitting work for him. It’s not something he wants and it’s not something Linda would have agreed to! But two out of the Reagan men have questioned if it was time to give up the badge while Jamie on the other hand throws into dangerous situations because of how much he loved the job.

Jamie and Edie had worked a drug bust and neither of them had hesitated over taking the job despite how dangerous it was.
THE END!